Actually I don't THINK I have to keep quiet about the Mother's Day cards as I don't THINK the 'rents know about this blog, but if they do, look away NOW...

Tracie has given us a nice restful challenge this week on Daring Cardmakers - ie I didn't have to think hard about it!

I want the focus of your cards to be the girls. It can be any style, any theme, and any recipient - as long as she is female.

And I helped myself further by using a sketch from March 3 at Sketch This and being inspired by Roree's card in particular. I think mine is different enough to say inspired and not lifted? 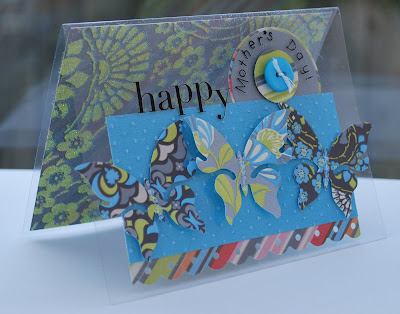 I used a Shortcuts clear card blank. They were still a good deal from the States, rare now and the customer service was fab (can you tell I stuffed up my order?) I haven't shown my first clear card attempt as it was not great but I am working on it as I love them. To my shame, I didn't do all the proper back to fronting so the inside is not as pretty as the outside. And I wrote on the back, where you could still see the tape and some PENCIL LINES! Gah! Throw me out of card school.

The patterned papers are all Amy Butler Tea Box as are the die cut butterflies. I do wonder if I will end up buying another sheet of the butterflies (if can track them down) as they are things of wonder and I did use three at a time on my Mother's Day cards (but they are worth it!). That green and grey paper at the back is beautifully glittery. I added some embossed Coredinations cardstock and a circle of grey American Crafts. The little rub ons are Doodlebug and the big ones are AC. Button is from my button box (there's helpful).

That one is for my mum. This one for mother in law 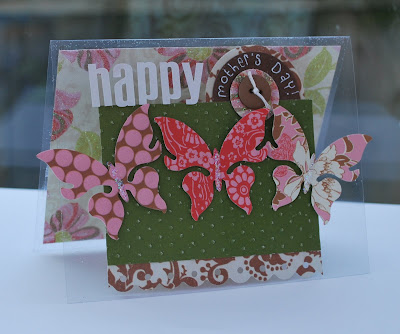 Everything the same apart from handwritten sentiment. Those teeny tiny rubons can make you lose the will to live I tell you. And the white letters are AC stickers not rubons this time.

On Monday I managed to finish another layout at double quick speed just because. 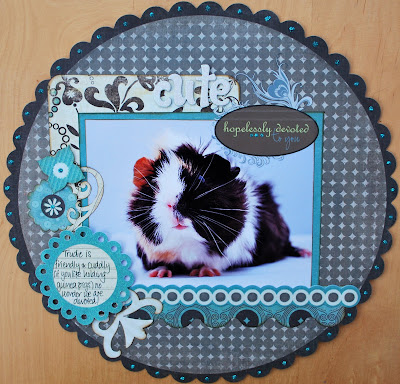 Putting it in the album I realised that I have not scrapped anything just because for ages. Most of my scrapping has either been for my Salt album or not destined to live in my house. I think I need to step it up (and where would you find the time says the voice of reason?)

Phil took this molto cute photo of Trudy (spelt her name wrong according to Carys. They are Trudy and Abby. Not Trudy and Abbie or Trude and Abbie. Get it right muuuuuuuuuuuuuuum. Huh (almost) teenagers.) There is an even cuter one of Abby that will need to be scrapped too otherwise she will get jealous and stop squeaking at me.

Almost everything is Crate Paper Prudence. I did enjoy indulging myself with the embellishment pack. Normally I think that is an extravagance but it makes life easier! The scroll is cut with the craft robo, I have used my new best friend cream sparkly Thickers and the rub on is from Upsy Daisy - part of the stash that I won! I won some lovely stamps and rub ons. I haven't been able to track down the matching papers in the UK but they go quite well in tone with Prudence so I shall make some cards with them soon. I'm trying hard to use up paper sets rather than leaving little bits all the time. Hard though!

H phoned in last night. 12 of them had gone to Pizza Hut who ran out of individual bases so they all had large pizzas for the price of small ones "so we have lunch tomorrow sorted out with the leftovers". I have a feeling every meal he has to buy will be pizza based...
Posted by Lythan at 10:26 am

Thos cards are beautiful. I got some of those butterflies in my Feb DT kit from Bub Funk and have only used a few so far - I adore the way you've used them, the clear cards look stunning

Your cards are gorgeous Lythan, love the clear card bases and those butterflies!!!!

I must use my prudence pack (hangs head in shame - thats another pack i've got not opened yet!) Beautiful layout you've done. :)

Fabulous cards and that scrap LO is stunning!! cute guinea too!

Beautiful cards and LO, Lythan. Love what you've done with the acetate cards. I am kicking myself that I didn't get Crate Paper Prudence when it came out - those colours are sooo lovely.

k i have to say i love your printing and love your style too!!!

These are all beautiful, love the 1st one!
Clairex

These are super stunning cards Lythan. I don't use acetate much. Must try using it more. I adore your scrap page it is just beautiful. What a cute little piggy x