to be a pilgrim

And there is still a lot of merit in it now. I often think of faith as a journey where we experience all sorts of things with Christ walking beside us. Its not always positive. There are all sorts of things that can be seen as disasters, dismal stories that people tell us and yes, even the odd foul fiend along the way. Pilgrim's Progress also has the wonderfully named Slough of Despond in it and I know I have fallen in a few times myself. But what the hymn tells us about is keeping our eyes fixed on the prize, keep on keeping on trying to be a Follower of the Way. Persevere.

Which is what the theme for Salt is this week. For many of the Salt team, this has been apposite as their journey is tough at the moment. My self doubt as I trudge through my essay writing is trivial in comparison to what others are facing (hey, but the skills are coming back. I just used the word apposite after all) and I hope that we have been supporting each other. But we get most support from the one who carries us when we need it (You have seen what I did to the Egyptians, and how I bore you on eagles' wings, and brought you to myself. Exodus 19:4)

Here is what Hazel has to say about Perseverance.
It's my (Hazel's) turn to choose the topic this time and my theme of 'perseverance' is based on Hebrews 12:1 'Therefore, since we are surrounded by such a great cloud of witnesses, let us throw off everything that hinders and the sin that so easily entangles, and let us run with perseverance the race marked out for us.'

I am so encouraged that, although we are urged to persevere, the race is 'marked out for us', so we can rest assured that the plans for our lives are in God's hands. However, we must do our part and 'throw off everything that hinders' and keep on track with Him. 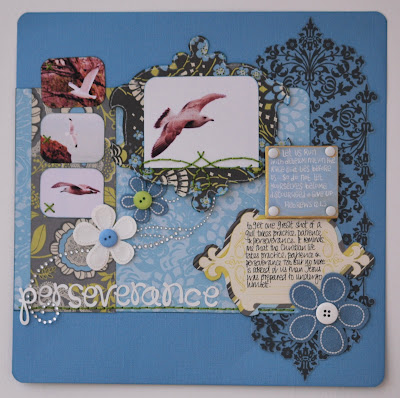 I don't have an eagle on my layout, but there is a gull! I used the example of Phil patiently taking loads of photos of birds (my hard drive is full of feathered friends) before he gets the perfect shot
to reflect on what it means for us to persevere in the task of being a Christian, of being a pilgrim. 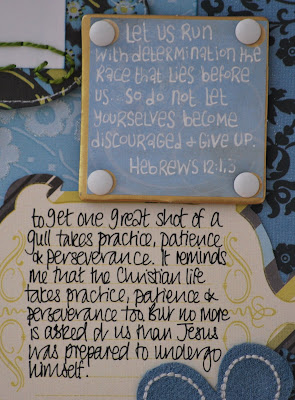 I actually managed to snag a Gotta Craft kit this month. Usually I am too late. They are full of gorgeous goodies. What is nice about this one is that it is more KandCo Amy Butler which goes with the pad I already have. The bling cardstock and the very patterned papers are from the kit, the light blue from the pad. The scrummy overlay is from the kit along with the larger journalling spot, which I cut down a bit, ooh and the sewing template is from the kit too. I am getting into proper hand sewing on layouts and cards!
Other stuff: I added white glitter to the pale blue paper as most of that pad has glitter or foil - but not that one! Also added some blue and white fabric flowers that I have had for about 3 years - from a Self Addressed kit and thought they were too good to use. But this layout deserved it. Buttons, brads, other journalling spot are simply "from stash" the letters are Doodlebug. When I finished the layout I felt that there was something missing. As ever I just made it up as I went along and there was too much space in the middle. Next morning I found some odd bits of Prima bling which was just what was needed. Glad I persevered.

Now I must go back to the spirituality of Alcoholics Anonymous and whether it is desirable or manageable for Christians without addiction. I was really in the Slough of Despond over it yesterday. I have spent many years working on making intellectual concepts and theories accessible in a non academic way (well i try) so it is a struggle going back to the old way of thinking. Anyhoo first thing yesterday morning I discovered I had won a Studio Calico kit through Cathy Zeilske's blog. And somehow that lifted the whole thing. It may be trivial but it was just what I needed to get me through. SOme pilgrims use staffs, some stout walking boots, all of us, prayer, but for me at this point it is obviously crafting that keeps me walking that journey of faith...
Posted by Lythan at 9:47 am

Another beautiful layout Lythan! I just adore your scrapbook pages, they are so unique. And wonderful comments, especially on Pilgrim's Progress, one of my all time fav books!

A lovely layout and a beautiful response.

beautiful layout and ideas behind this lo. Great work!

Your layout is absolutely beautiful!! The pictures and thoughts are wonderful for the topic!

Love your response to this challenge - as ever, the LO is super x