And here is Friday's news

How come I haven't updated my blog? I have no idea! Work rather got in the way of blogging. OK work and Bejewelled Blitz.

I had one of those work weeks which quickly undoes the good of a holiday. Actually that is unfair. It had a pretty good try but the hols were so relaxing that they won out! There is something really lovely about being away just the 5 of us and those times may be coming to an end with Mr H going to Uni in a year's time. I hope he will still want to come with us but we'll just have to see.

I have a layout and a card to share. The layout is actually about 2 weeks old now but I've just been that slow! It is another one using up my Studio Calico kit. Have I mentioned that I love that kit? I think I might be able to squeeze one more layout from it! 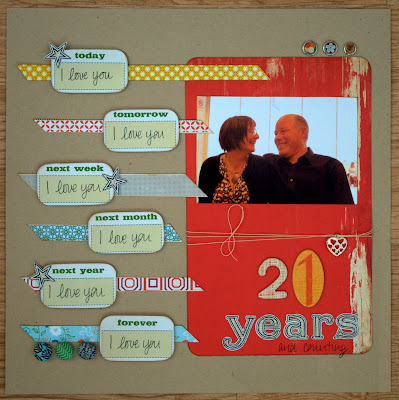 the actual photo is not up to much - taken into the sun at McDonalds on Phil's birthday, but I like our expressions. Apart from the string and the heart it is all SC kit. There was a yesterday too but I had already cut that off the paper and used the other side before I noticed! Our 21st anniversary was during half term. This is getting to be serious numbers now...

And my Daring card for this week. 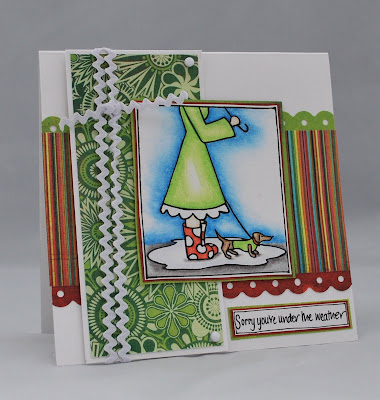 This image was sent to me during an image swap by the Funky Hand design team. I love these images. (Phil wonders why a headless woman is standing in a puddle of dog wee but that is just a male perspective...) I used a card in Card Trends as a template although, again the end result is quite different. I used Lime Rickey papers and hand wrote the sentiment.

The craft club at Church was on yesterday and I made a few simple cards for that but haven't photographed them yet. The next few weeks I won't have a lot of crafty time (sob) but I will see what I can do. Maybe less bejewelled blitz and more creativity is the answer!
Posted by Lythan at 3:24 pm

Fab LO Lythan, I just love the way you use every last itsy bitsy scrap of paper, very commendable!

Love the DCM’s card too and the papers look great.
Have you found that pad yet!

ahhh I was wondering where you'd gone! Kept popping by to see if you'd put your card on, but....
Anyway, I love the card - Phil is way too cheeky - you should give him a slap with a wet fish.
Great LO too

Love Phil's description lol! A fab card though and a brill LO - that piccie is cool :)