A trip down memory lane

Over Friday and Saturday I spent some time with my good friend Anna. We don't get to connect very often but she is such a wonderful amazing person. She lives in a gorgeous little cottage in Barnes, just back from the Thames. On Friday we pottered round Barnes and ate and talked and drank some wine (mine watered down as Anna bears the scars of my night of shame from University. And no I am not going to write it down on my blog!). On Saturday morning we did a 4 mile walk to Kew and back along the towpath (how virtuous was that!) then went to Richmond for more pottering round shops helping Anna find the right dress for a posh occasion soon (I love clothes shopping for other people) followed by a late lunch watching the cricket on Richmond Green. It was like a normal persons weekend! Only of course I was back to leading worship on Sunday. I'm NOT COMPLAINING . But one of the sacrifices of my job is that my time off is not when working people have time off and it can make it difficult to get together.

I decided that I needed to scrap a page about how long we have known each other and that we are in denial about it. I took the small camera with me and we did an arms length photo. I came home and delved into my photo album from Uni. Do you know I have one album for three years? And most of the photos are from party nights ... fortunately from the beginning and not the end! there aren't many photos of me and Anna to chose from but here are some to give you a giggle. 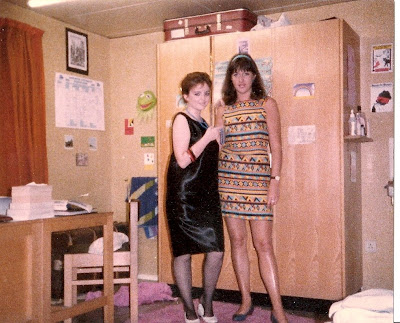 This will appear on a layout below but note the close up of my lovely room. This was a double room as I made the mistake of saying that I didn't mind sharing. That means you share. But you do get a room three times as big as a single. Note my beloved Kermit the frog mask. And the black and white etching of a man about to be burnt at the stake. A friend was a talented artist and I asked him to draw me something. He chose this theme "because I know you are religious" Nice. I really wish I'd kept it now. I do have the "Lythan the sheep" one he did in 3rd year. The stake burning man was put in the one place in the room my room mate Debbie and I couldn't really see it without actually trying. Sorry Andy. What you miss from this angle is all the lovely rainbows I decorated the "sperm walls" with (so called because of the shape of the paint splatters). Groovy.

Here is us in second year 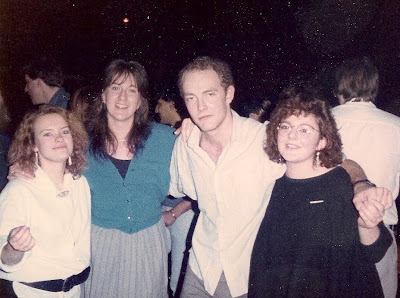 with Haggis, still a close friend of Anna's and Jill (I think) at Haggis' 20th birthday party. HIs real name is Paul but we never call him that! The black was creeping in and by year 3 I was more "alternative" looking. I used to spend ages getting my hair to look this bad 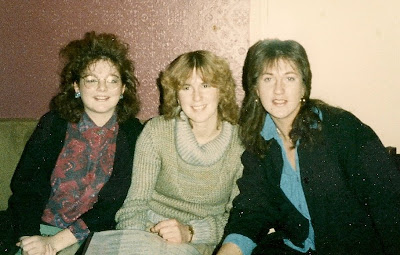 but it was 1985 by then. I have no idea of the name of the girl in between us - and we were all on the Executive together! that is just awful. We were having a Furness College Executive do in the ultimate eaterie in Lancaster - the Kebab and Steak house. Veg kebab and chips - just the best! (And posher than it sounds!) I was Welfare Officer for the year. I was rubbish at it really.

And finally in the memory lane stakes a photo that gives me a real pang. I've scrapped it below but again it is good to see a close up as the camera doesn't like taking photos of scanned photos 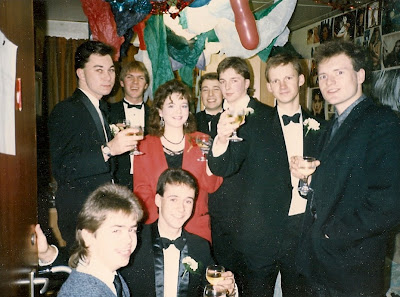 This was taken around the same time as the last one in the room of the lad at the front whose name may have been Stuart but I can't remember. Then we have cool guy who was doing an MA; Paul Talman; me; Mark; Russell (who wasn't a student but was the brother of Paul Cannon who was my best mate for the first term and I wish I was in touch with now and was probably taking the photograph); Andy (the artist); Scott (another great mate) and Jonathan Harper Hill in front of me.

The pang I explain with the scrapping. Its an application for the Twisted Sketch design team. I had to use a sketch and ribbon in some way. Here it is 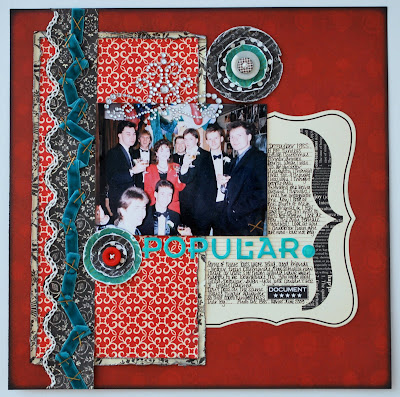 see what I mean about the photo? I used Dream Street Birdie Bits as background paper and then some large pieces of 7 Gypsies and Scenic Route Sonoma. The flowers used SR Grafton and two Crafts House Allsorts papers. The big journalling block is by Theresa Russell. I used my big scallop scissors (again) and did some daisy chain embroidery along the scallop. Then I added some fabby velvet ribbon from Imagine That, scrunched up using staples. You can see the colour of the ribbon better here. 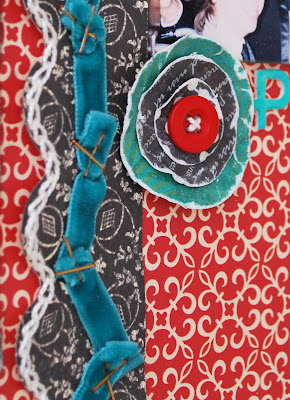 The letters are Basic Grey White Chocolate Chip coloured with an aqua marine chalk ink pad. And I crowned myself with a Prima Say it in crystals swirl. And here is the scrapping as therapy slightly easier to see. I used to think I was so fat and ugly and unloveable. It makes me sad for me then. Mind you if I had a steady boyfriend I don't think I would have got a 2:1 :) 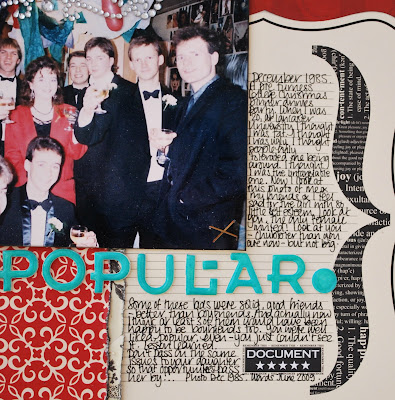 And here is the layout which kicked off all this brooding over my past (and laughing at my daft get ups!) 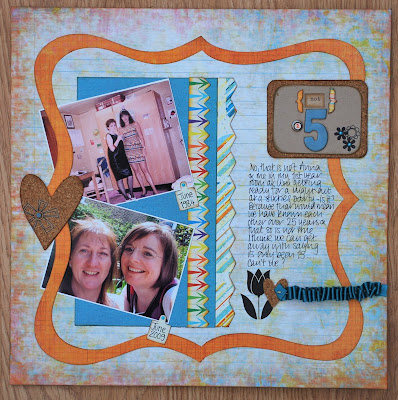 Papers are Pink Paislee (as are the rub ons) and Sassafrass (as is the chipboard) The cork is Chatterbox. I tried to get a studenty effect with the cork and the layered photos 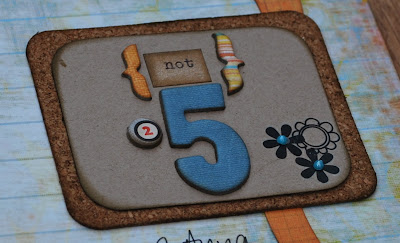 the only other addition wre some papermania stick on stones and Anitas ribbon given a ruffle effect. Here is the journalling 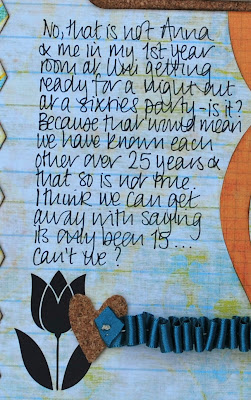 I've also made Carys' birthday card today which I am going to submit to the Papercrafts Idol. I think the competition is rather too strong for me but I needed a special card anyway. Its still drying so I'll photograph it later! Now it is time for an evening off en famille with Pizza, cider and Oceans 13. And more preparing Hywel for his time at Uni which is coming round all too soon!
Posted by Lythan at 6:00 pm

Is that really you Lythan?

I love looking back over old photos and reminiscing, it brings back so many happy memories.

The LO’s are beautiful and I love the colour combination you’ve chosen on the first one…..and the ribbon technique….very nice!

Good luck with the DT call on Twisted Sketch….my fingers are crossed, as is everything else!

Fabulous LOs Lythan - what a great way to remember your college days. My college photos are really grotty and not up to scrapping. That's my excuse and I plan to stick to it

Oh My! I remember those hairstyles! I have a few piccies with that exact same hairdo! Well done for getting them scrapped. Kim

I would never of thought of you as the person you were in those pics - you are such a fab person and I have never even met you, but you pass me some of your faith whenever I drop into your read your blog and always set me thinking about what you have said.