The Community of Faith

I was sitting here trying to work out what to call this post and when my mouse hovered over the title bit, the title for todays Salt post popped up so I decided to use that rather than use another 5 minutes on something different.

I am feeling relieved today. My brother went for a major op yesterday but has come through fine. I now think that it was major in that if it went wrong, it could be serious (as they worked on his neck) but if it went right then recovery is quick. I'm still a bit shocked that he is being discharged today! But just thankful that he came through all right and they are pleased with him. we have an odd relationship in that we haven't seen each other for many, many years and hardly communicate by phone or card. (Complex reasons that I'm not going to share here!) but I am longing to see him now. I was going to dash to Preston on Monday while he was in hospital but can't do Blackpool there and back in a day so Phil and I will head up for a dirty midweek when the kids are with my parents in July! (for an international readers Blackpool is like a very, very poor person's Las Vegas and was famed as the destination for illicit affairs hence the phrase "dirty weekend")

It was my turn to choose the Salt challenge this time. I wanted something that would follow on from the last theme so took my inspiration from the end of the second chapter in Acts where the doings of the first church are described. Wow what a gang! Read about them here. Eating together, worshipping together, sharing everything together, supporting each other. See, some of that I could do, but having done something like it in my youth - where I met Phil - I know that it is by no means easy. But sharing everything? What, even my new October Afternoon papers?
I'll have to get back to you on that...

So what does it mean to be a community of faith?
Here is my take on it... 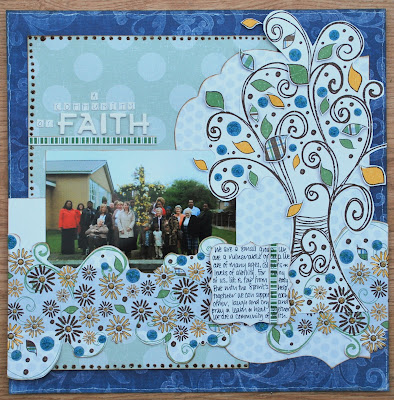 The photo I used was not taken by me. I wasn't even there! It is the end of the worship on Easter Day at my tiny church - Heaton Way. I was at the other one but someone sent me the photo on their Blackberry! We are a Church who are only just there. there is always a question mark over the existence of such a small church. But it is a truly special place with a really diverse congregation that is both vulnerable and exceptional.

The blue paper is MME and the rest is Daisy Bucket. The big tree was a lot bigger and just too dominant so I had to do a lot of pruning! But it did mean that I could add some dimensional leaves. The large scallop was traced from a Technique Tuesday tile and the small journalling one was done on the Craft Robo. I added Adornit letter stickers and Basic Grey chipbaord letters and LOTS of distress stickles.

Here is a close up of the journalling 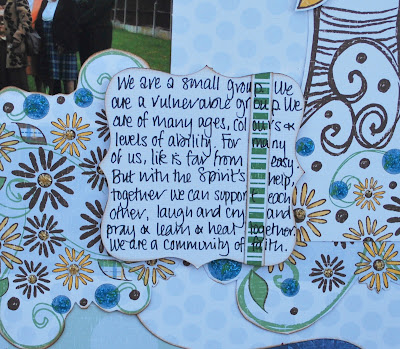 Thank you for the stimulus for this fortnight's Salt challenge - your response is just right and love, love, love the way you've used the papers - you are such a clever bunny! Just had a peep at the post below - super LO and cute headless lady card! Hope your brother progresses well. x

Beautiful piece! I loved this week's challenge!! We have a small church too and I love how close we all are because of it!

Beautiful page!! The challenge was a great one! :)

Hope everything is ok. And if you are EVER near Blackpool or Preston you tell me - ok?!! I live not very far away and actually work close to both (yes it is geographically possible!) Now that is a FH order!!