Just a quick one

Do you know how hard it is for me to write that and not make it something rude?

Anyway I really have no minutes to blog but I am going to any way!

I am off soon to spend time with my mate from Uni who I have known for (cough 25years cough). The rest of the family will be home so I feel safe to blog this unlike the couple who twittered about being away and were burgled...

I still haven't shared much of my hols or my day out to Secret London with Phil on Monday. Ah well... So Daring Card today. Theme Sizzling Hot. Lythan did not read the word "only" so her card has more colours in.

Hi it's Keryn here this week and in New Zealand we're in the middle of winter. Not snow like some of you get but we think it's cold all the same. I want to see card creations using only sizzling hot yellow based colours like red, orange and yellow to send some heat out to us through the web.
And I had my eyes tested yesterday with no change so no excuse there! 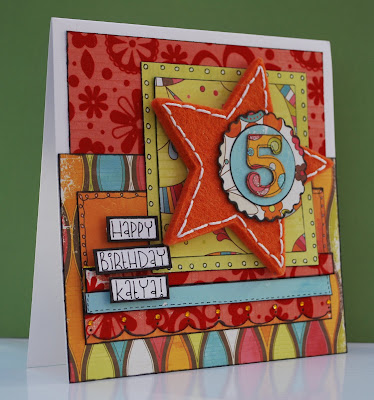 I used an old 2Sketches4U sketch for my card. The papers are all WRMK Nonsense range. I did a bit of border punching, adding some tiny yellow jewels; a die cut number; hand written sentiment and a mahoosive felt star from a German craft shop which I hand stitched. There is also a wee bit of doodling. It turned out quite complicated and I think Katya's parents will wonder why so much effort went into her card!

I also did a quckie layout on Wednesday. I love clean and simple but can't really do it. This is close though.

The sunshine effect is from photographing it. Carys and I are shopping in Rye in the photos. On the close up we are in front of a craft shop which I was allowed to enter (gasp!) and did not buy anything (double gasp!). It had been raining which brings a depth to the colours I think. The papers, journalling card and scallop are OCtober Afternoon; I added Jenni Bowlin letter stickers; American Crafts felt rick rack; Making Memories epoxy star thing; chatterbox die cut butterfly; Scenic Route "love"; a pin, a button and two of my Papermania tags. I lvoe them now which is good as there are about another 3 million to use up. The "two" card came with the Studio Calico kit but I think it must be OA as it matches so well!
blrub close up for those who DO need their eyes testing! 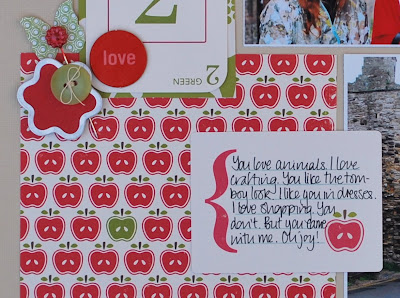 Well even if you did sneak some other colours on it still looks pretty HOT to me!

Fab card and Fab LO too
Secret London sounds interesting - hope you'll tell us more when you're back from gallivanting with your old mate!

Came to say I love your card this week and I'm absolutely loving that LO, I've still got that OA paper looking at me on my desk so I defo feel inspired now to use it.
xx Leo

Just love your card and your layout! Love the colours and your handwriting too!! Enjoy catching up with your friend. :)

Wonderful card and layout! The card does remind me of summer and hotness and I think the blue sets it all off!