And the answer is...

that the service this morning happened. We had slush and sleet rather than snow and a few hardy souls made it there. I'm so glad we did! We sang no songs (gasp!) and thought about how we are called by name and that God has our names written on our hands - a bit like David Beckham having his kids tattooed on his body! And that we are all much beloved by God.

I went to a party last night wearing inappropriate shoes. It was a quiet party (well more that, it was one that church members were at so I had to behave myself to a certain extent!) but I was so fed up of warm and sensible shoes that I wore my pink leather mary janes instead. Phil wore his "lovely" silver/bronze winkle pickers that he bought for himself for Christmas (size 11!) and we slithered not a jot but giggled quite a bit!

Here is the card I made for the birthday boy. I used a Basic Grey Archaic pad and loads of layering 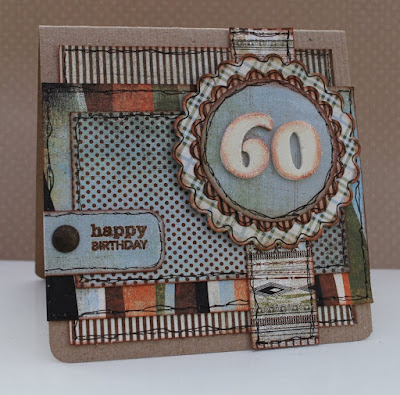 the card blank is a square kraft one. I added some thickers (inked and glittered) and a Craftwork Cards candy to finish off the sentiment.

Then this afternoon I made a layout using the Sarah's Cards December sketch. Its the first time since I saw it that I have had to scrap just for me in this way - and uses photos from the day trip to France that Phil and I took last summer. 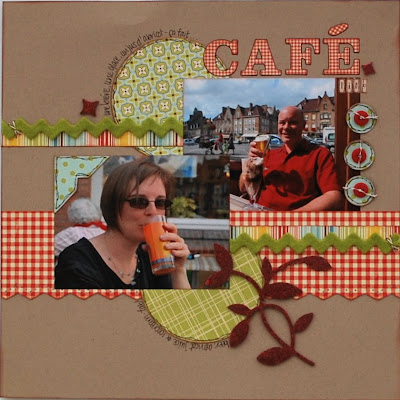 Update: better photo now!
Everything is by October Afternoon apart from the MM Tiny Alphas ; Studio Calico Twine and BG chipboard turned over and glittered - a tip I picked up from Debbie .

I will do more scrapping tomorrow - its the holiday 2008 album - I'm always a year behind!
Posted by Lythan at 5:41 pm

I'm a bit fed up of my warm and sensible boots! I love the sound of your mary janes :)

Love all the layering on your card and that is a fab layout. :) Its gorgeous and bright and the glittered chipboard adds that touch of 'je ne sais quoi':)

GOrgeous!! Love this one, thanks for taking part in the sketch challenge.