I had just entitled my blog "Interesting title to follow" which suggested a rather dull week until I remembered something that I find interesting that happened this week...

My darling hubby has just started off his own blog Little things please little minds partly to record his New Years Resolution of Poetry learning. (NB his URL has "thebish" in it. He is not, and never will be a bishop, it is just his nickname on Bolton Wanderers forums. He is fond of purple though). I of course have been INCREDIBLY supportive and not made any snarky comments or suggested that really he should learn Bad Sir Brian Botany as that is real poetry.
But actually I am rather proud of his acheivements.

He was rehearsing his "Death be not proud" (well not his exactly, John Donne done wrote it first) when I noted that a line in it reminded me structure and rhythm wise of a line of verse that I knew somewhere in the back of my brain, only all I could remember was "tum te tum, blah, blah blah, blah - I am to learn". And that possibly Shakespeare wrote it. Thanks to the power of Google it took me 5 minutes to discover that it was Shakespeare - and is indeed the opening speech of the Merchant of Venice.
In sooth, I know not why I am so sad:
It wearies me; you say it wearies you;
But how I caught it, found it, or came by it,
What stuff 'tis made of, whereof it is born,
I am to learn;
And since seeing it in print I have discovered that I can now recite it off by heart as I learnt it for my O Level English Lit in 1981 (yikes that is a long time ago). I wonder what else is lurking in my brain that I haven't remembered that I know? And it gives me something to quote back at Phil. Though I may give Bad Sir Brian a go too. I am awfully fond of AAMilne's poetry. But Winnie the Pooh gets on my wick (gasp! did I really say that out loud. Hope you'll still speak to me)

I did remember (albeit just in time) that I was in charge of Daring Cardmakers this week. It is ages ago that I came up with the theme and I can't remember why. (Not even Google can help with this one) Maybe I was driving past a golf course...
Hole in One
I'd like you to make a card that has at least one hole in it. Could be a card with an aperture or one that features a border punch with holes in or you can use a hole punch to create a pattern. See how inventive you can be!
I have to admit that this card is version 2 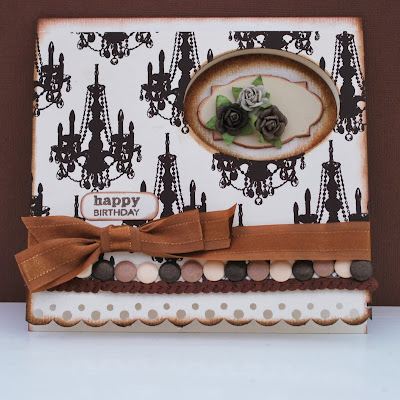 Version 1 was me attempting the pattern with a hole punch. Part of the problem was that I used the cropadile and it is just a bit heavy for little old me. Then I tried to cut out around the pattern then realised it was one hot mess and started again. Most of the elements from this card are from the December Crafty Templates card kit (now sold out). I punched with a Martha Stewart punch the border on the bottom, realised the card was then wonky and so cut a little of the back. I think more needs to go as it is still a tad squiffy! (My blog doesn't have that title for nothing you know).

The sequins don't show up proper like on the photo but they are leather look! There is lots of card candy in there and yes, another successful bow and this time the ribbon goes all the way round so I am even cracking on with the tension. I must remember to use my straighteners on that end though! the chandalier paper is actually a sparkly cream and dark brown and everything tones together better than the photo suggests. I don't know if it works more at an angle... 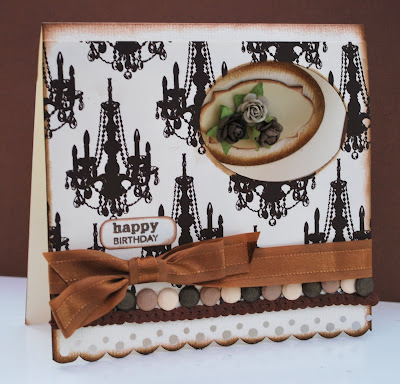 In other news... thanks to a better work life balance this week I have only one photo from the 2008 holiday to scrap! Yay me. Then there is the rest of the day trip to France 2009 before starting a new holiday album. Its the only "themed" album I do apart from Faithscrapping and really is more about our family than any sights. Because we do more slobbing than sight seeing. However I can tell you know that the Weymouth 09 album will have more sights and nature thanks to Phil's new found photography skills. Oh yes.

Back to the end of 08 though. I have a Bazzill lickety split album which means some of the pages have pockets to put photos and journalling in to. They are hard to photograph though 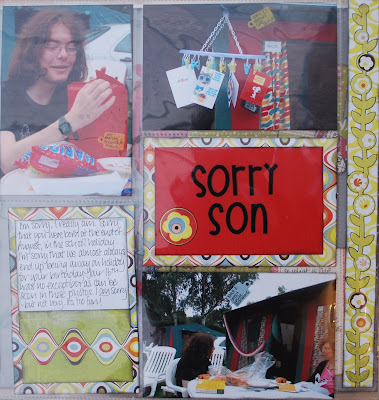 Here is one using BG Offbeat which talks about how Hywel always ends up having his birthday on holiday. Well he did, but those days are over as we have now had to move our hols due to A level and GCSE results. His 18th is on a Sunday though. ie Mum and Dad will be working...

Then another double layout. Go me 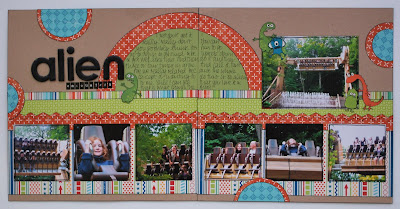 All October Afternoon Nightlight. I'm sad that I didn't get the light right on the letters. They are Piggy Tales chipboard covered in UTEE - the last layer being black which gives a luscious almost plastic look to them. Sigh. I am back in with UTEE - except I tend to emboss on the floor near the plug and then get backache. I suffer for my art you know. The journalling is about how alien it is to enjoy rides like these. The eagle eyed among you will note that only 3 Nevards are on this ride and that Emrys is as sensible as I am.

And now to one of my all time faves - which has the title in the photo. I didn't think it needed any other really 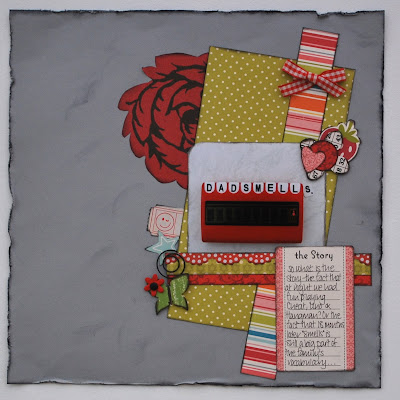 This actually has a mix of Scenic Route; October Afternoon and CHatterbox (I think) papers with a mix of embellishments from the same company and an old Crafty Templates card kit. I added lots of black smudges so that the black smudge already there would not be lonely. But I liked the bashed up edges contrasting with the prettiness of the rest.
Here is a close up of the words 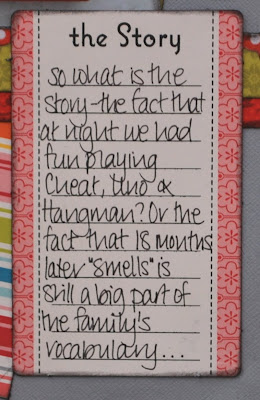 Ironically it has been suggested at breakfast today that the time of "you smell" is over. I'm not holding my breath but it has been such a big part of family life that I am kind of sad if that is true :)

Sermon today - this week the reading is the Wedding at Cana when Jesus turns water into wine and Paul writing about how we all have different spiritual gifts. We are also making people elders and turning bread and wine into a real sharing of CHrist's sacrifice for us. SO a lot to fit in and I haven't yet worked out the key to it. Which probably means I'll be playing a lot of Bejewelled Blitz (it does help you know)

Wonderful card and a fab dare, Lythan - I really enjoyed making my card for this one - and I absolutely love what you've made for it.

Love the LOs too and enjoyed catching up with you all - I know I'll always be cheered up as well as being made to think more seriously whenever I come to visit.

Hope your service works itself out - Bejewelled Blitz as thera[y, hmmm yes I do believe you're right

A really fab dare Lythan and I just love your card. Your layouts are fantastic too "Dad Smells" is brilliant!! :)

your scrap booking is amazing, and i love the card you have made at the top of the post,

hope you are having a good weekend.

Loved the dare Lythan and love your card loads! Fabulous LOs too.