The lonely knees of the short distance jogger

Humph. As you will know having been bored to death by my Couch25k updates, I have discovered jog/running. And to my surprise I really enjoy it. I did my first 20 minutes without stopping last week and was working up to the next biggie - 25 this week (It really is an excellent way to get you started). I've lost a little weight, have bags more energy
BUT
my kneeeeeees
they hurt. And they hurt a lot of the time. Not agony so I can't walk but enough to wake me in the night. I have been trying to run through it hoping that it was some kind of novice running thing and part of getting fit. But that is not really working. So I am trying to be sensible and actually leave them a few days until they stop hurting and then try again. it will mean repeating a week or two but I don't actually want to stop all together.
If that doesn't work I will have to go to the doctors and I hate that.
I now have a lot more sympathy for people with athritis of the knee cos it really is a bit pants.
I still reccommend the plan and the going outside and running thing. Its brilliant
(which makes me think of this. Which is brilliant)

Last Monday (ooh has it been so long since I blogged?) I had a lovely day crafting with the most wonderful Sue and started two layouts which I have since finished at home. 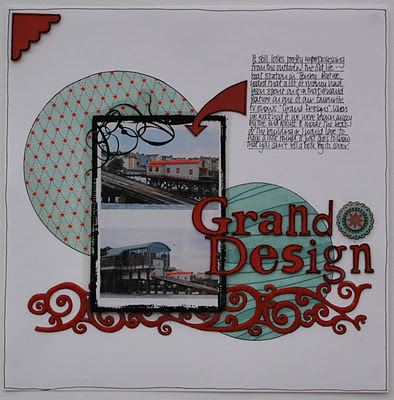 This is from Sassy Lil Sketches - a site that is just about to close down sadly. I used Sue's rather lovely Creative Memories circle cutter system which is a lot easier than drawing round a plate! I used some really old stuff on this - Queen and Co felt; a Hambly transparent frame and some chipboard pieces. Paper is from MME and letters are Grungeboard. The grungeboard and the chip stuff all coloured with Distress Inks. 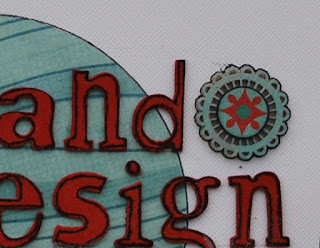 The little wooden Kaisercraft circle was coloured with Tumbled Glass distress ink - perfect match! And then the little paper middle fell out of another craft kit - the September Gottacraft kits and lo - exactly the right colours.
The layout is all about the refurbished old lightboat house in Tenby which featured on Grand Designs 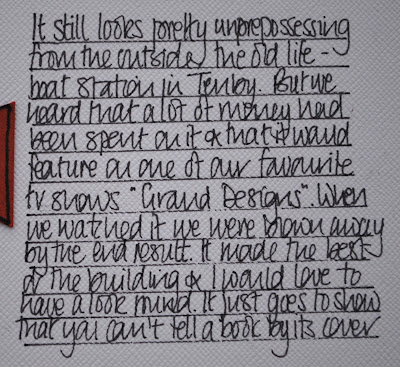 and then one I had to finish at home 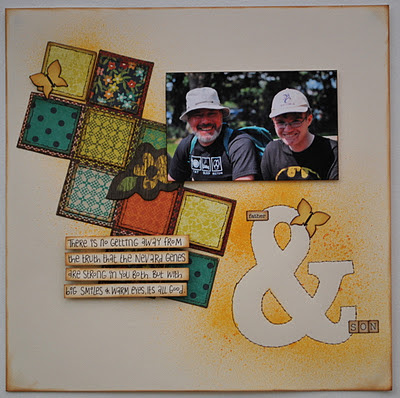 This used the aforementioned kit papers - all Crate Paper. I also used a yellow mist on a Studio Calico mask. It looked quite good but even better when I went round the edge with a prodding tool and did some pretend stitching. I really liked the patchwork style paper but some of the patterns were a bit pink and girly. So I replaced some and layered others - there was a Nestability square just the right size. The edges were all pricked and inked too. It took a while but it was worth it I think. 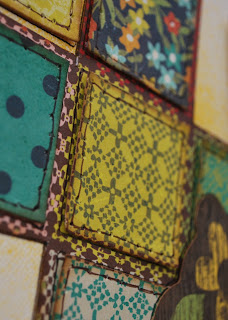 The butterflies and flowers are Chatterbox and the stickers from Authentique (via the sold out kit).
I love this photo of two of my boys. I caught Emrys actually smiling at the camera. Result.

Any other crafting time (sadly not a lot) has been spent working with the fab new Christmas religious phrase stamps by Imagine That. I have a class almost prepared and might come up with some quick and easy designs for my own cards too. Which I won't start until half term - but that is nearly here already.

I've had a busy week workwise including a 24 retreat with other Ministers where I had to lead two lots of prayers. Its a hard gig leading worship for other professionals but it seemed to have been well received so thank the Lord for that. It was amazing that different themes and readings kept weaving into the various parts of the 24 hours that different people prepared.
I've got a long day tomorrow so am looking forward to a day off on Monday - but no running yet I fear.