Some mother's don't have them

I don't like slapstick comedy where everything goes wrong. I think I still have a twitch from being forced to watch Frank Spencer every week as a child. I do try. I bought Black Books as a box set to watch on holiday only to find I can only manage one episode before having to leave the room. So you can imagine that it wasn't my idea to go and watch Johnny English. I wanted Tintin but was outvoted. So how was it? lets put it this way. We all have to score films we watch on DVD or at the cinema (!) JE Reborn got 9.5, 9, 8 and 4 - which i then marked down to 3 when I realised I was still shuddering 10 minutes later. I was glad I had a corner seat so I could cringe with my legs right up. 2 of the points were for Dominic West on his own as well. So if you love seeing silly men doing prat falls then it is the film for you. if not, you have been warned (especially if you do not drool over Dominic West)

But I do like hanging out with my fams so that is all good. Nice day off yesterday - I taught Christmas cards at Imagine That and found some Christmas papers to use at home for my own cards. The day also included a little bit of scrapping following the Shimelle class which i am really enjoying. But then I do love patterned paper! 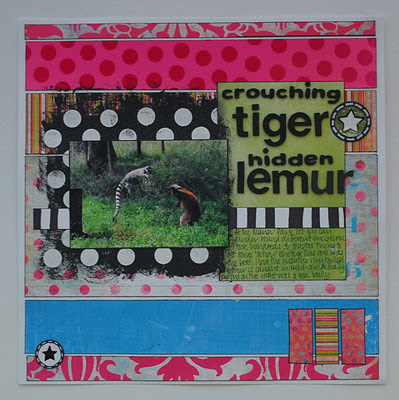 This page was about using spots and stripes. As the papers were busy I decided that I would paint over a section with black paint. And then hated it so added some white embossed dots and home drawn black and white striped paper. 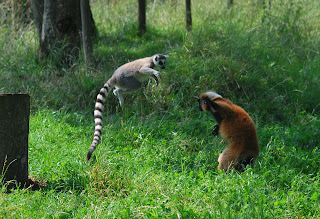 I adore this photo. I love the way that I caught the lemur mid leap. we did get a lot of lovely lemur photos so expect to see more.
Details: Papers: Pink Paislee and Fancy Pants; Stamps: Papertrey Ink; Embellishments: Chatterbox When I knew that Carys and Phil were going to get airbrushed tattoos I wanted them to take the camera to record the process and may have had a wee tantrum when Phil said he hadn't as he didn't want to intimidate the "artiste". Humph.
Details: Papers: Cosmo Cricket, Basic Grey; stickers: Cosmo Cricket; Dies: Nestabilities; Punches: Fiskars and Martha Stewart; Pearls from Imagine That

I've managed another layout which I hope to share but then on Thursday I will have to pack up the craft room to turn it into a guest room as Phil's mum is coming with her 4 collie dogs!
Posted by Lythan at 12:00 am

That Lemur photo is FAB! Such a fun Layout!

And the tattoo layout is really nice - I love the layered strips, great take on the challenge.