I know the sun has been shining for the last week or so but I am finally, finally coming out of my cocoon and really feeling better and ready to face Holy Week. I love Holy Week. Even though it is the busiest week of the year workwise. (Some kind of service or devotion at least once every day, with a rest on Saturday ready for THE BIG ONE on Sunday). I've been pondering whether, if it feels so fulfilling, I actually need more public devotion time in my Ministry. This is the advantage of a move, in that you can think of new things to try out. And it will help that one of the churches is opposite the house. Which then will need to be balanced by offering something at the one that is more like 25 minutes away...

I even went for a run last night. I promised myself that I must not push it too soon or feel down on myself for not managing too much. Its hard though. The good news is that I wasn't the slowest ever. The bad news is that I only did 2.6 miles. Still onwards and upwards now! And I need to make the most of the terrain I am on now as soon it will be running with HILLS.

I just about managed my Daring Cardmakers card last night before having to go to bed early with a headache. Man, I hate getting back to running after a break! Keilly chose the theme of "Material Girl" and after some thought I decided that I would have a stuffed heart on the front of my card. And here it is 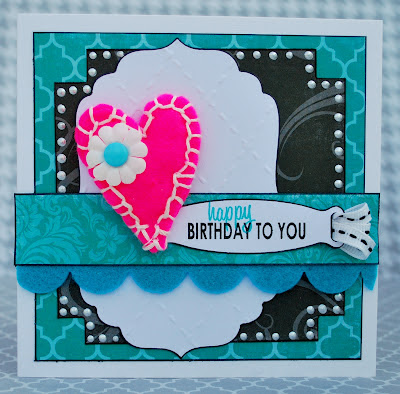 And it really is that bright (well, with the sun shining on it!) It will be hand delivered, what with postage now being eye watering, so I made the heart as puffy as could be 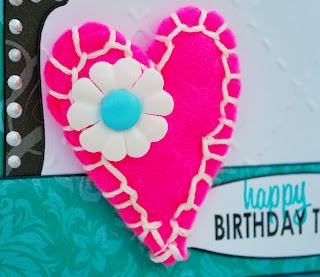 It is cut from pink felt using a Sizzlit die (wasn't sure it would cut through but no problem). I die cut two and used blanket stitch to sew them together. Once I had remembered how to do blanket stitch that is. I stuffed it with the scraps of felt as I was too lazy to hunt out any fillings I might have! The papers are Echo Park. There are yellow, grey, black and aqua versions of the same papers including herringbone and chevron in the set and I adore them! I also used PTI and Nestabilities dies; Imagine That stamps; Liquid Pearls and Docraft flowers and brad. And a Sizzx embossing folder.

Here are the cards for my Imagine That class. Note: they are also bright. 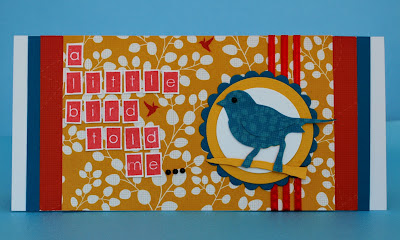 They use some lovely Kaisercraft papers which feature yelow, red, pink, pale green and a teal blue. If anything they are a fraction brighter than in this photo. Here I also used Nestability and Sizzix dies; ribbon and Imagine That letter stamps (best set ever) and some (slightly squiffy) black stick on gems. 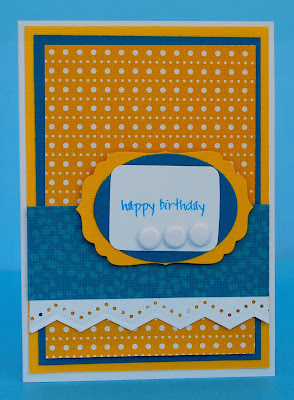 as above but also a Martha Stewart punch and some Candi. I think the label needs something else but still can't decide what. If I was making this for home I would have outlined everything with a sharpie pen and that might be all it needs. Or maybe some blue pen round the outside? Hmmmm 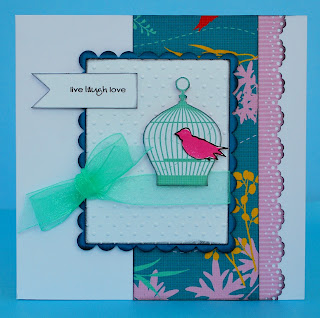 The bird cage is one of the patterned papers. The bird is a Claudine Helmuth stamp. Well actually two as you stamp a sponge one and then add the outline. It is meant to be not quite in the lines, it's not my bad stamping!

Right, the rest of the morning needs to focus on Holy Monday and Tuesday, sorting music for an hour of singing and reflections on Wednesday and if possible, the service for Women's Guild on Tuesday afternoon. See - Holy Week is fun!
Posted by Lythan at 10:37 am

I love your card with the pink fabric heart. The colours are just perfect for spring!!!

I absolutely love the colours of your DCM card this week, and the blanket stitched heart is very funky!

Loving the other cards too - colours I'd never feel comfy using together in a month of Sundays, but you show how fab they are