Decided on a slightly lighter title than the last few.
My friend Ernie was "Promoted to glory" (as the Salvationists rather wonderfully put it) on Wednesday evening. I kind of like to think that he has had a nice surprise in unexpectedly meeting Dave in heaven... Both funerals, for various reasons, will not be straight away so it will be quite hard on their families and on the church family too. I'm going down to Boys Brigade tonight to talk with them about death as Dave was a much loved leader (and so was Ernie in his time) and I will share this story, which I was rather touched to see was used in Rev to talk about sudden death too (side note: I am still reeling from discovering that Miles Jupp's dad (Miles plays Nigel in Rev amongst other things) is a URC Minister and Miles has a theology degree. (Doesn't stop him having a potty mouth at times. Actually might explain it)

Anyway on to my thighs...
I didn't take my running stuff on holiday (and then was a bit miffed as I could have done one run on the beach at least) and then last week was super busy with work so it was very hard starting again. Phil has had a month off with a poorly knee and only added 1 minute to his time. My first run I had to stop early as I was overheating (I did wonder if I could take off my shirt and just run in my sports bra and then realised I must be even more light headed than I thought). I could hardly walk the next day! Ran my full 6k last night (but veeeerrrrru slowly) and then had to go to bed early. But I can come down the stairs without going "OW!" on each riser so that is progress.

As its Friday it is Daring Cardmakers day and it is also the beginning of another month (eeep!) so it is a colour challenge. Kathy found this fab photo 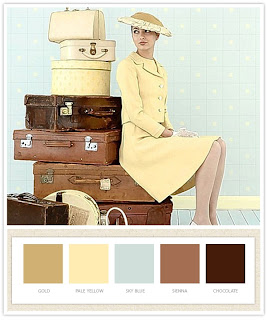 which has such lovely colours. I think the blog looks wonderful today. Here is my interpretation 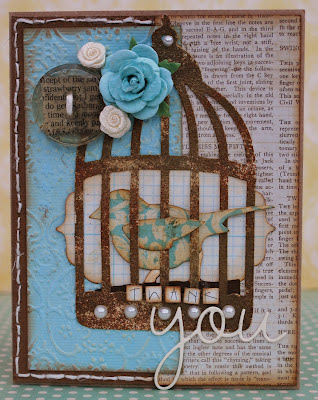 The card has already been given to Beryl who has made me the most amazing knitted nativity set. I hope to take photos of some of it soon but it is something I will treasure and use for always. I've even got a spare baby Jesus in case he goes missing one day!

I used the other half of my PTI kraft cardstock sheet and some Lily Bee papers, which do tend towards cream rather than yellow but hey ho. The birdcage was die cut and embossed with versamark which was covered with a mixture of Distressed Embossing Powder in Vintage Photo and ordinary Gold  to try and give it an aged look.

I'm off out again soon to Women's World Day of Prayer. I love these services as you know that all across the world in different languages and at different times during the day, the same worship materials are being used and God is being praised. I've got a really busy working weekend - I hope you have a restful and creative one, in whatever you are doing
Posted by Lythan at 11:57 am

Gorgeous card Lythan, and well done you for getting your dissertation finished and submitted - you won't know what to do with yourself now!
Sx