as I have loads to do and little time to do it.
And for the next few weeks it will get more so.
Lent is a really important part of church life but it puts extra demands on and leads up to the biggie - Easter! I will have some down time but will talk about that after it has happened...

So this is just a quick marker to let you know I am still alive and still trying to create.
My Lenten discipline involves a wee hint of crafting, but very simple so the creating doesn't become more important than the devotion. Will photograph it at some point 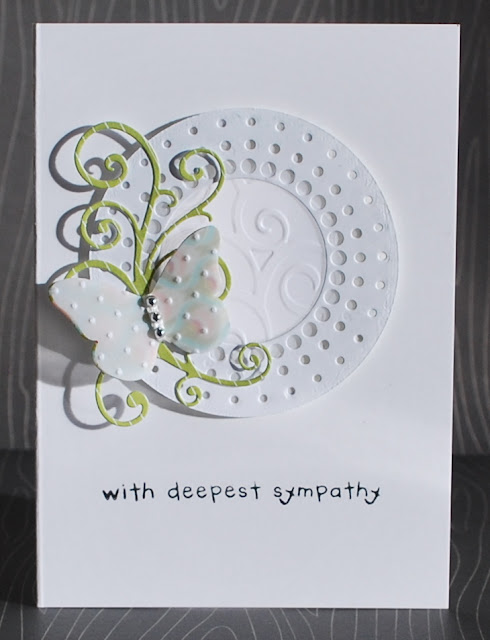 Not helped by (and I am really not complaining about this) the sunshine that made the cards difficult to photograph.
I went for a smooth white card base. I cut a sunburst die from more white card, cut that out with another circle and cut out the centre. I also then die cut the centre of the card base (with me?) die cut and dry embossed some vellum which I stuck across the hole in the card with a glue pen; die cut two butterflies, one from vellum (also dry embossed) and one from patterned paper (Basic Grey PB and J). The butterflies were attached together with a little tape and some thread wrapped round several times. This was covered with silver stick on gems. A scroll was die cut from a Studio Calico 6x6 pad. Butterfly and scroll were stuck to the sunburst circle which was layered over the vellum with small foam pads. I added a Marian Emberson sentiment. Yes it would have been easier to stamp it before I added everything else but why change the habit of a life time?

Having said all that, I do like the way that the card came together. Or cards, as I made two at once. Here is a view that shows off the dimension and the vellum a little better. 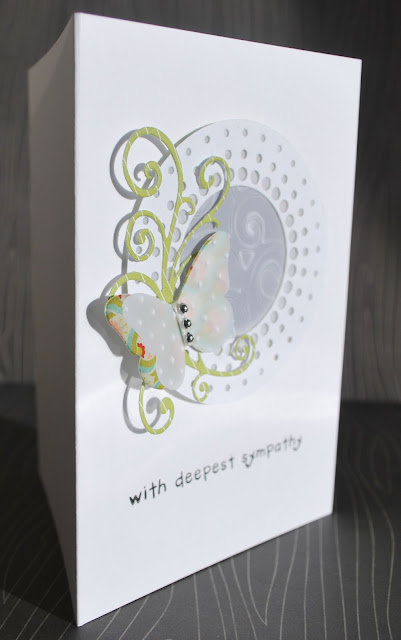 I have just made another card which features butterflies but as it is already a day late I have put it in an envelope without photographing it. It is quite nice - you will just have to trust me on that!
And that is all there is for now!
Posted by Lythan at 6:47 pm

Your card is lovely and very elegant, Lythan! I like the different white materials you used and the soft colours you added.

Beautiful Card! I'd never have thought of using butterflies on a sympathy card but you're so right about this! And the white on white is super-elegant. Love it.