The Good News: No rain in Torquay for DAYS now
The Bad News: It is so, so, so windy and cold (albeit bright and sunny) that I still don't want to go out. But go out I must as I stayed in yesterday and too much indoors is bad for you apparently.
(I don't believe in horoscopes. It is useful sharing a birthday with Carys as our horoscopes are always the same and never right for either of us. I don't beleive in horoscopes as I said. However my star sign is Cancer the crab and I am a bit crabby and I do like staying in my shell and not going out)

Wednesday we went to see the Host at the local cinema which has just become a Vue one. hurrah! First time we went, before it Vue'd I rattled off the ages of those assembled and the girls just looked me up and down and went "that'll be 5 adults then". Vue have variable prices for teens and we managed to find one Orange phone so got one two for one deal (apparently there is another Orange phone on my Workdesk. There could be an elephant on my workdesk right now and you wouldn't find that either). My elation at the fab deal was deflated when I realised I was a bit thirsty and so decided to buy one of those sherbet frozen drinks (they last longer and I make the whole family share one) The chappie brought it back and said (triumphantly) (at least in my imagination) "that will be £4.60 please" It tasted good, but not that good. And I got brain freeze.

Although that might have been the film. I enjoyed the Stephenie Meyer book and the film brought it to life pretty well. But the dialogue and the acting. Oh my word. It felt like they were putting on a school play. Still the sarcastic replay from number 2 son on the way home made it all a 5 star event. Last night was home movie night and we watched War Horse. We were all a bit underwhelmed by that as well - but did enjoy spotting all the British actors. And guessing who would die next...

In a few mins we are going on todays outing to a local country park and craft village called Cockington. Which number 2 son finds amusing and slightly unbelievable. Everyone is not looking forward to a brisk walk around the park and craft village. I have to keep quiet about craft villages otherwise I don't get to look round them. its a hard life.

In amongst all of this jolly family stuff I have had quite a bit of craft time this week which is a thing of great joy to me. As I said in my last post there is much I can't share yet but here are a few items I can.
First, the Daring Card for this week. And it is the wonderful Gez who has chosen the colour challenge for this month 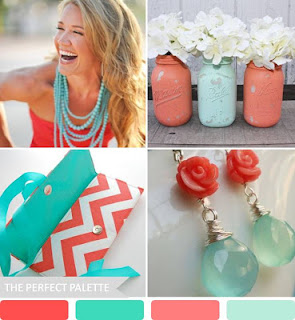 I knew I had the right colours for this. Or thought I did until I came to make the card 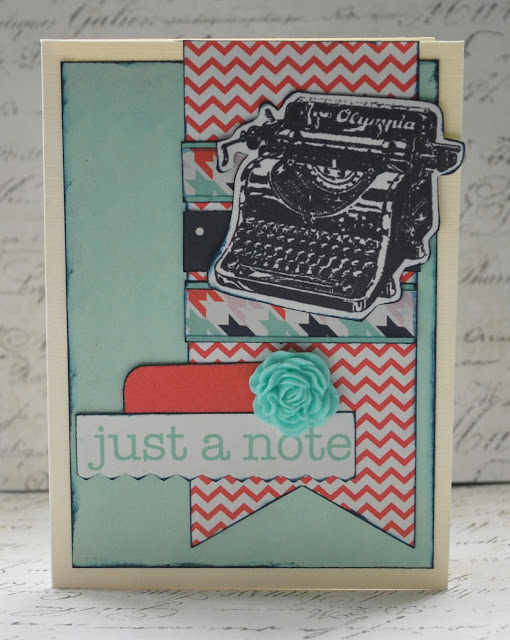 Actually looking at it now that chevron print is pretty spot on! Everything on the card is from the new Fancy Pants Tredsetter collection - apart from the resin rose which is Prima. The flower may be coming off prior to posting as it stops the card being an ordinary stamps worth. But I will replace it with some stickles I think.

On Wednesday Clearly Besotted launched some new stamps. Thanks to some excellent customer service I was actually stamping with them yesterday. When I saw the new feathers I thought "ooooh they would be great for Sympathy cards. Must buy." so I did and they are That is only the second time I have stamped that image (first was a go on some scrap) and its just perfect. My stamping isn't always great so it is fab to have such reliable stamps to use. The sentiment is from another CB set and I am very pleased that I managed to stamp each word seperately as they are joined as one strip. A swoosh round the outside of the card with the Hero Arts blue ink I stamped with, plus three navy liquid pearl dots and it was done.

And finally a super quick layout 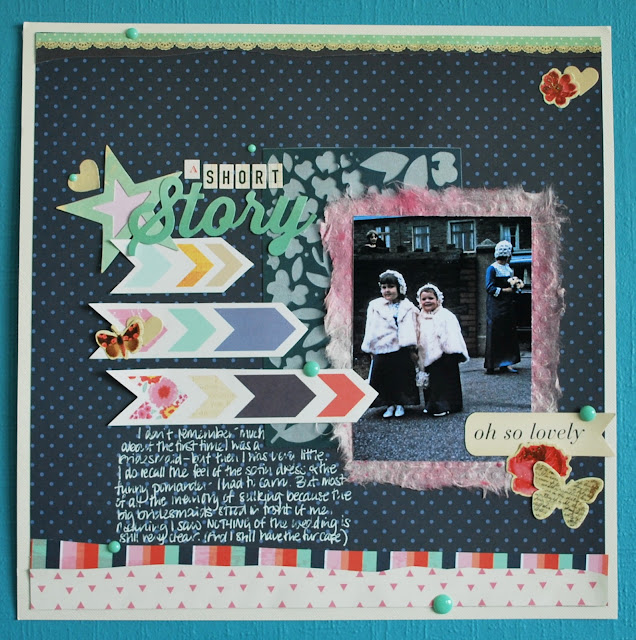 This one was just for me (ie not from a kit) which I needed to do as I have bought rather a lot of papers just for me as well recently. The papers and most of the die cuts here are from Dear Lizzie Lucky Charm. I also added some October Afternoon letters and Prima glittery stickers. I wanted to use the die cut panel but felt it got lost on the dark background so added vellum behind it. I also decided to experiment with a bit of handmade paper which I embossed and then sprayed with pink glimmer mist to match the pink cast on the fur throws (which were cream in real life but as the photo is a scan of an old slide the colours were not great). I think the photo is from 1968 (must check with my dad and write the date on somewhere) 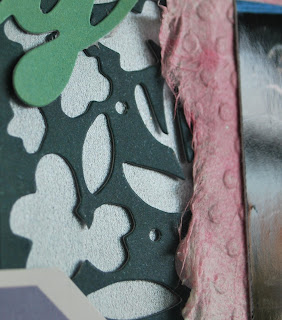 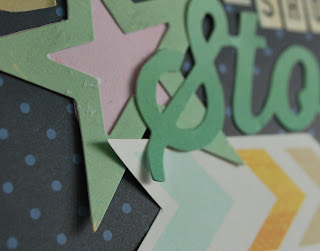 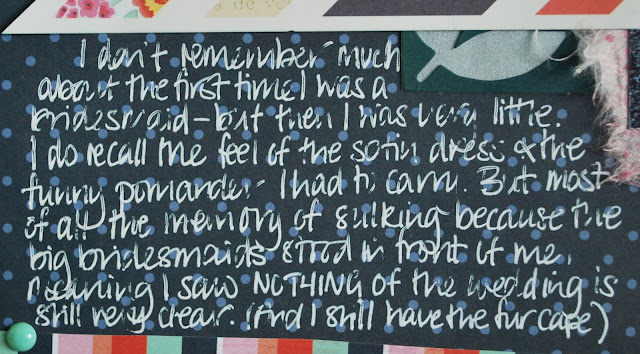 The latest Quirky Kit arrived today for me to play with - mmmmmm - I'm going to have fun on my last few days of holiday I reckon!
Posted by Lythan at 4:51 pm

Love your typewriter card - aqua and red are the best together :) Great page too, the photo is fab. Such a lovely story - funny what you remember isn't it?

It sounds as if you've been having a lovely time crafting! The cards are lovely, and the page is terrific - what a gorgeous photo!

Stunning collection of cards.'Just a note' is our preferred one! Good luck with your future projects! xx