Do you see what I see?

Life is gradually getting back to normal after Easter week hols, a week back at work and then Spring School where Ministers go away and learn and reflect and worship (and make friends and have fun) together. We went all the way to Brunel Manor. Which is basically 5 minutes drive away from our house. So whilst Ministers from further away (i.e. Swindon) had fun exploring it didn't seem quite like that for us. But Phil and I did venture down to a local cove so I could cross it off my list and in the lovely turquoise blue sea we saw this 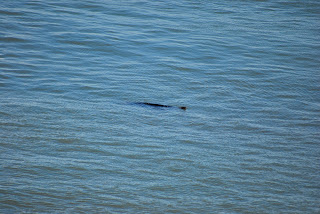 Do you see it?
How about a close up

Its as good as it got but it was definately a seal. Oooh I was so excited. Apparently there is a seal who swims around the coves. This is two along from "ours" so maybe I will see him again!

here is my late Daring Card for this week - Sharon chose the theme of Child's Play. I had all sorts of ideas but in the end went for simples! 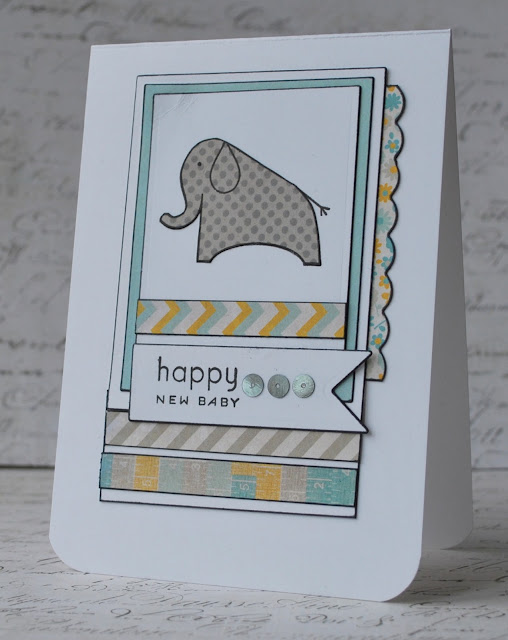 A mix of new and old on here. Old is the Papertrey Ink stamp set. New are the papers, the ink pad and the gunmetal sequins. I used a Clearly Besotted dotty square stamp which I stamped on grey card from my new Fancy Pants Park Bench 6x6 pad. I overstamped it with the elephant and cut it out, sticking it on a white panel where the elephant was already inked (meaning I could cut off the tricky tail!). I layerered up Nestabilities die cut boxes and strips of paper, in the style of an old CASE this Sketch pattern. The scallop at the side was done using small scallop scissors. Some black sharpie outlining, a sentiment on a fish tail banner (are all my sentiments on fishtail banners now? I hadn't noticed!) and the job is done. Finally
There is a fabulous set of cards on the blog this week so do have a look.

I'm off with Phil to pick up his new bike in a while. He is very excited. I am less so I must admit... But he promises it will be full leathers at all times and no windy side roads from now on.

I like this clean and simple design. And I like this papers - I bought the very same two weeks ago!