It is a record

Long term readers of my blog (are there any or have I bored you all away?) will be aware that ever since we moved to Torquay it has basically rained without stopping.
But the last 2 weeks there has been more sunshine than rain. Huzzah!
I love my drive from home to Brixham which I do at least 3 times a week (it is 6 this week!) It is 10 miles but I go all along the coast and love spotting all the different glimpses of sea on the way and on the way back. It is even nicer in the sunshine. If you have to have a 10 mile commute to part of your work then there can't be many better ones.

Crafting time has been a bit thin on the ground this week. I did take card making stuff down to the Place - Youthwork that is part run by my church. I do only take things that I am happy to be used (or think I am!) but this does get tested when almost a whole packet of stick on pearls goes on one card. I have to remind myself that
1) I do only take things that I am happy to be used
2) the packet was only £1
3) its not like I only have one packet. I'm not telling you how many
4) the card looked fabulous.
which also tells me that sometimes we have to be generous. Both me with my pearls but in a deeper way also in using what we have. What has more value - the beautiful card that used a lot of pearls, or a drawer full of packets of stick on gems. We need to use the gifts that we have given
and of course there is the bonus that suggests I still don't really get the "enough" idea
5) I can buy more stick on pearls!

I did have time to join in with the Daring Cardmakers though. It was a fun recipe challenge - Ingredients 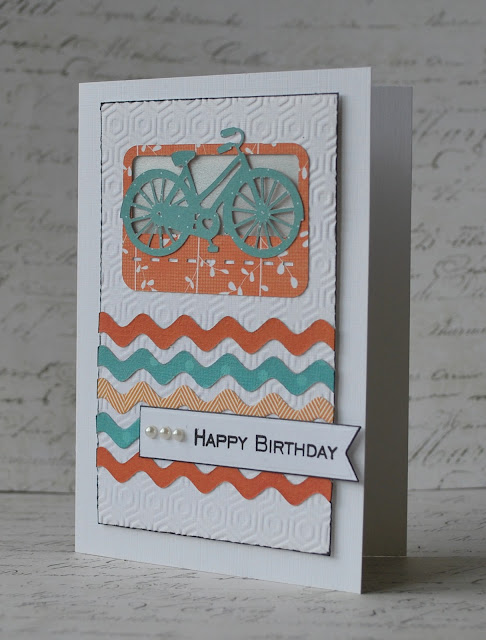 .
Do you call that colour blue? Or is it too green to be turquoise? I'm calling it blue anyway
I used the Silhouette to cut out the Lori Whitlock bicycle and road shapes. I trimmed out the centre of the white embossed card and added vellum behind as an aperture. 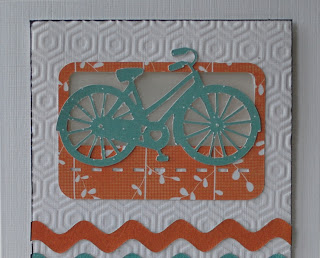 I die cut the paper ricrac using a PTI die. The embossing folder is by Spellbinders. I added Pearls and an Imagine That sentiment to a Spellbinders die cut pennant.
And that is almost that.
Except that the first bike I cut out had a bit of a spoke disaster. So I trimmed them all out and made this as well 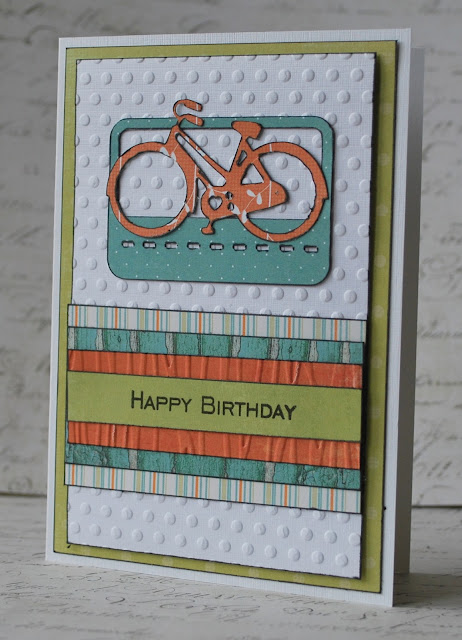 Lets see if I can keep on doing more with what I have this week :)

These cards are both terrific, the combination of those gorgeous bright colours and the embossed white backgrounds look great!

And oh my what you said about generosity rather struck me! My Grannie used to talk about 'Generosity of Spirit' and that's what I'm trying to adhere to! it's not always easy!

with love, and also thanks, Mags B xx

I love your cards Lythan, that colour combo is just gorgeous. Ha ha, I know exactly how you feel about the pearls - I've had exactly the same thing happen in my classes - even though I buy stuff specifically for my classes so I don't feel like it's 'my' stuff it's still really hard sometimes to let it go!!

That's definitely some kind of blue, Lythan =).
I like both of your cards a lot. The bike is so cute!

Well, I’m still here and stalking and I’m pleased that the sun has been shining for you. We had two nice days and now it’s freezing again and I’ve just put the heating back on.
I think I know how you must feel when so much of your kindly given stash ends up on just one card but I also think your reasoning is perfect. At least at the end you have a very valid excuse to do more stash shopping, not that any of us really need an excuse.
Loving your cards and that definitely looks Blue to me too!