To take my mind off flying

The day our holiday was about to begin Carys woke with something strange going on with her eyes. it was all up in the air whether we would be but as I write (Monday night) we are off to the airport in a few hours.
Phew.

I have done my Daring Cardmakers card for this week
Gez has dared us to stencil it
And so I did.
Son number two is guess how old this week? 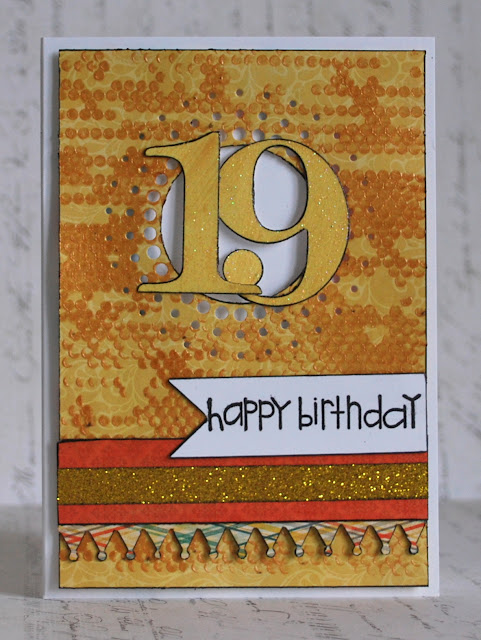 And as it is his "golden" birthday (same age as the date) I took that as my inspiration.
I used an MME 6x6 paper pad. First I die cut the sun blaze from the middle of the yellow paper and then I stencilled gold texture paste through a bubbly style stencil (which leaves it looking a bit like snake skin to me).
I die cut PTI numbers from some yellow Doodlebug glitter card which I also covered with the texture paste to tone the colour down a little. A Fiskars punch, some American Crafts gold glitter tape; a Paper Smooches sentiment on a Spellbinders die cut and some Sharpie outlining action later and all I had to do was mount the lot on foam pads 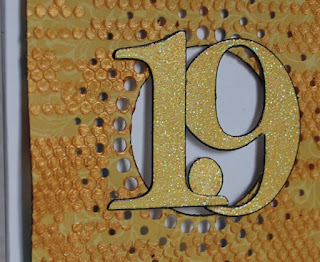 and call it done! It is the first time we have had a family birthday and not all been together which will be strange. But Hywel has promised to play birthday fairy on behalf of us all - the benefit of having two boys at the same University I guess!

Gorgeous card Lythan, I really love the design, and the colours, it all works really well x

Good idea to use paste with your stencil. It looks great!
Have a nice holiday!

Hi Lythan! I came across your blog today, searching for inspiration for the circle burst die, which you feature on your son's birthday card - and elsewhere, as it is a lovely die! Just had to say I appreciate your blog style, and will be visiting again. Of course, I love your card-making style too! Cheers! Ann (in Australia)