Top of the Pops

can't find the "proper" version of this.
Incidentally
1: I was a big fan of TOTP from a very early age. As soon as my piano lesson finished it was Top of the Pops time and little Lythan (rather rudely now I think about it) would jump off the piano stool and run to the other side of the (long) sitting room to watch the show. I would have been about 6. (I would also listen to FAB 208 on my radio in bed to get to sleep. Now it is 5 Live). Sorry Miss Pickles

2: Miss Pickles was actually on TOTP singing with a group called Congregation. Remember them? (Rather excitingly she was also the daughter of the man who wrote the books that taught me to play the piano. "Flying Start" by Sidney Pickles)

3: There was a time when that Led Zepplin track was seen as old hat and was replaced as the theme tune. Not long after I got married and was a student again, someone was playing Whole Lotta Love across the Mansfield quad and I remarked to an undergraduate "Ah remember when that was the theme for Top of the Pops?" "Was it?" he said incredulously. I felt very old. Although I was only 5 years older than him, tops.

All that really has nothing to do with the story I want to tell this month. I just wanted to link it to the fact this is another story about my Pop (grandfather) who was Top of the Pops.
So it is Storytelling Sunday - which I missed last month so I am making up for it this month because I have already written a blog post today but don't want to miss it again.

Ahem: update. Guess who forgot to link it? So lets call it Storytelling (almost as it is really Tuesday) Sunday
The lovely Sian invites us this year to "Pick your precious" to share a story about something very special.
Here is mine 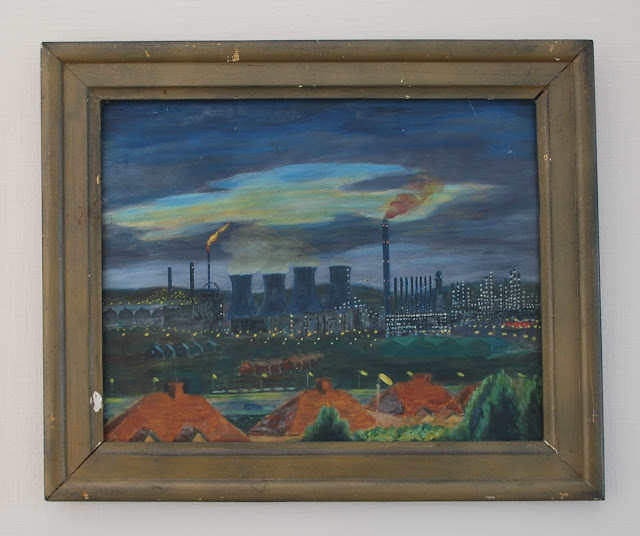 What is precious is both the picture itself - because my Pop painted it - and the scene.
When he died I was 14 and his two children divided up his paintings between them. They are not great art but they are a lovely reminder of him. I at some point asked Mum if I could have this one. It kind of got lost in our last two houses but was found when we moved and has finally been hung up on the wall. Yes, I should get it reframed but don't really want to be without "his" frame either.

So why did I want this picture? It is the view from his bedroom window on Baglan Road,  Port Talbot. South Wales. He had a big bay window and every night when I stayed there I would look out onto the most beautiful scene in the world to my young eyes. On one side was the BP oil refinery. On the other the Margam Steel works. Just below the first set of house rooftops went the M4 motorway. At night everything was lit up and sparkling. Some people might have seen heavy industry and light pollution. To me, it was like fairy land!

there is a joke (perhaps by Max Boyce?) where two people are arguing whether the thing they can see in the sky is the sun or the moon and they decide to ask the next person they see to have the deciding vote. He says "Dunno, I'm from Port Talbot myself"
which says it all really...

Lythan, this is a lovely, lovely story. Please, please do link it up so everyone knows where to find it. I love that scene and the thought that it really is the view from the window makes it very special. Plus, any mention of Max Boyce always reminds me of my Dad! Love it

What a great post. I think the picture and the memories it holds are precious indeed. And Max Boyce? brilliant.
I'm so glad you linked up!

What a wonderful story, so full of love - for your Grandfather and for a place that many would say has no magic in it at all. Beauty is in the eye of the beholder, indeed.

The comment about Port Talbort made me laugh - but that's because I remember the comments about my home town also a heavy industry place and not seeing the sky...

The painting is definitely precious - and knowing it really is a window scene is nice too.