My babies have gone

far, far away.
They have left us for three weeks being transferred from my parents to Phil's mum half way through. It happens every summer as it is hard for us to work and care for them - without them spending all day watching tv and playing on the computer! It may be the last year it happens, at least for Hywel as he is nearly 14 now. But I think all of those involved would miss it in many ways. I think it's important for children to have time alone with their grandparents. Its a very special time and a special bond.
But I don't have to like them being away.

So of course I made the most of their time here by having a huge row with Carys this morning. She is getting more and more like me.... Apparently all her shorts were "too loose". I tried telling her that she has been wearing them for 2 years now but her mind was made up. What was sweet was seeing her brothers try to cheer her up into a good mood. Aw.

I was also put out becasue we spend a LOT of money on CD books (mostly ones the have read) and then can never find a full set of them. Just put them back when you have finished with them - it's not difficult
there, rant over, you can relax now.

Talking about a lot of money, we went to Frankie and Benny's to eat last night. Four adults and three children. Only the three chidlren felt they could eat adult portions. Which they did. Gulp. I don't think we'll be eating out quite so much now....

Oh and I've done another scrapbook page. I was looking through Carys' schoolwork and was inpsired to use some of her handwriting practice as background paper and her hand they she had drawn round and decorated in art. Then I wrote out some notes she has made for her new teacher. No photo but I don't think it needs it. 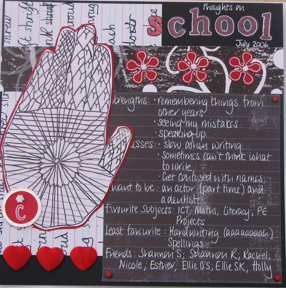 Hey! Very Nice! Check out this website I found where you can make extra cash.
It's not available everywhere, so go to the site and see if you can find something. I found something and make
and extra $900 a month!

Lythan, that LO is great. Well done you!!