So says the Revd Dr David Pickering and I happen to agree with him. Hols are great - and this one was terrific - but your own loo and bed - can't beat 'em.
I'm not going to bore you with all the details now. Just will say that if you ever have the chance of a holiday on the coast near Glasgow - then go. When we were driving there through some run down suburbs I was beginning to panic, but it was so, so beautiful. Wemyss Bay is a ferry port and there are lots of other ferries around so most of the photos of the sea have ferrries on them 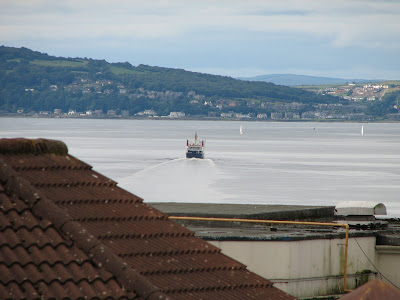 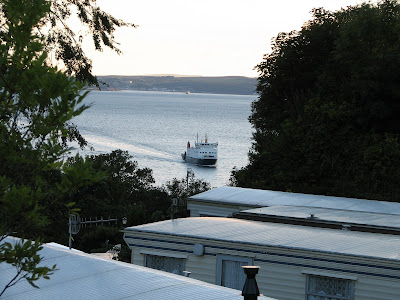 We did the outdoors thing, we did the cinema thing, we took along two box sets of Dr Who and watched at least one episode a night. Hywel had to tell Phil to stop playing on the Wii at midnight because he couldn't sleep through it (guess who got addicted to Wii tennis?). Ah, happy days. And I know my kids are older now but even so - 10 hours(including stops) travelling there and back without any arguments at all and I am dead proud of them.

I'll just catch up with the darey stuff now in case you were itching to know what I used.
I didn't do last weeks Daring Cardmakers - although as I took some craft stuff with me and used some buttons maybe I'll upload a late entry tomorrow! (Made over 60 cards in the end)But the week before was frills and what a (cough) frill it was to make. 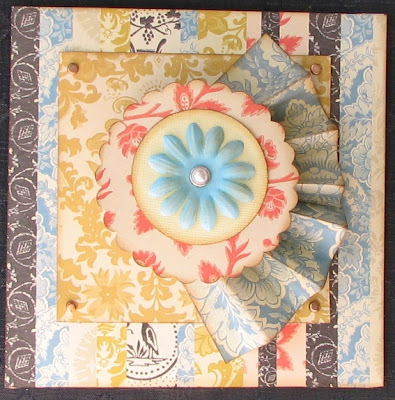 The paper is all 7 Gypsies Hudson Valley. The card was enormously 3d thanks to my failure to work out how to do a flat frill! On top I stuck a scallop punched circle and another circle and a flower and a gorgeous gem brad. I found someone to hand deliver it too!

The second Salt challenge has appeared as well. I love seeing the wide range of ways we express our faith. Casey chose the theme

I have chosen the theme "Life to the Full." This theme comes from the verse John 10:10b where Jesus says that He has come so we may have life and have it to the full (or in abundance)!

So, we would really love to see your take on this challenge of what
"Life to the full- in Christ" means for you. 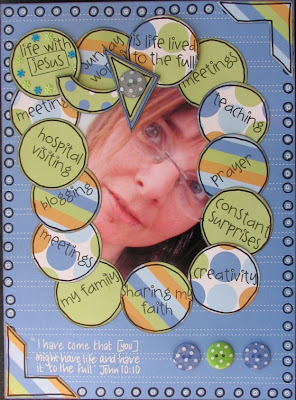 I have to say that this is one of my most favouritest layouts what I have done. I just love the colours of the piggy tales papers and the way that it all came together. Some of those Doodlebug buttons came with dots on and some didn't - can you spot which?

I did also finish that last layout for the Scotland 2006 album - but I haven't photographed it yet. I wasn't going to do another holiday album but having looked at all the holiday shots I keep coming up with ideas so I might do one after all. Am I brave enough for a 12x12 all to itself?
Right it is now 10:30, it is Hywel's birthday tomorrow and there is the little matter of a card to make...
Posted by Lythan at 7:58 pm

It's good to see you back, Lythan and glad that you all had a good time. I love the 'frill' card and, of course, your wonderful contribution for the Salt 'life' challenge. Wow! 50 cards on holiday - well done (have to confess I made that many when we were away recently in Bognor). I hope your back eased at the beginning of the holiday.

i love your contribution to the salt challenge! i love those colors together...

We stayed at that caravan park in Weymss Bay about 6 years ago (I recognise the view), it was a glorious hot summer and we had a great time too. Did you go on the Waverley paddle steamer from Largs? I think my boys like putting on the green at Largs best. Janice

Your work is beautiful.

Oh it's good to have you back and blogging!
Firstly Happy Birthday Hywel, hope mum got that card made in time...

Your work for the two dares is fab, I love the card and the LO is beautiful

Glad you enjoyed your holiday - though 60 cards is a bit of a scary total, I've never made a single card while on holiday!
Did you get a chance to meet up with Anita?

You know we all missed you, but so glad you had a lovely time!

love your salt LO, it's so clever and you do have a very Full life in Christ :O)
your frill card is Brilliant too, such a clever design.