Maybe we aren't meant to have chickens.
Windle Poons suddenly died yesterday. She was full of life in the morning but Phil found her dead - but still warm in the afternoon. Apparently chickens are prone to heart attacks. But it doesn't half make your heart ache. Especially Poons who is almost completely feathered now. It has been so wonderful to see her go from battery chicken - with wing bones showing and a very thin layer of feathers - to an independent outside loving plump egg laying bird. So Mrs Miggins is on her own again... Sob.

We have spent a fun filled morning at Pupil Review Day. The school is closed but you go in for a short time to set targets for the next term. The report is really hard to understand anyway. Phil and I have about 20 o'levels, 8 A levels and four degrees between us and yet we still can't make head or tail of them - let alone Hywel's computer mock GSCE results. AAAAaaargh. They all have just about the same targets as before.... Obviously we are not doing enough as parents to help them out. But you can't force a child to speak up in class can you?

Today is Daring Card day. Boy they come round fast! We went for a colour theme this time as a change. It was a lot of fun.
We want you to design a card using only RED AND WHITE on your cards- it doesn't have to be a Valentine themed card - it can be any theme- as long as use incorporate RED and WHITE on it.
Though red and white isn't as easy as it sounds... 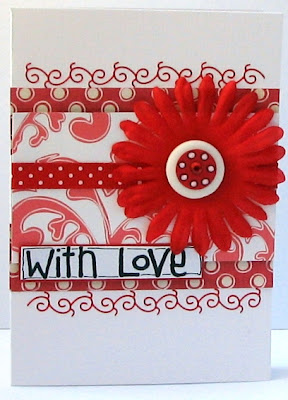 Red is quite a hard colour to put together with other reds. I think I just about managed it! I used sassafrass lass and American Crafts papers. The SL paper is technically red and cream so I added white circles! And then matching outlines on the AC paper. I used some red and white dotty grosgrain ribbon from my stash. The flower was made using a bloom donated by Kathy B, a white button from a Scrapagogo kit, a punched out red circle given the compulsory dot treatment and a red bargain gem (a huge boxful from craft central for 99p). 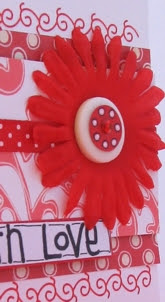 The scrolly bits at the top and bottom are peel offs. My friend at church gave me a box of fancy new ones for Christmas. I only had gold and silver before and some of these are quite something.

I have heaps of work to do for Sunday now plus card club at Church tomorrow after noon to prepare for. I think we are doing Mothers Day cards as it is now scarily close. Lent starts next week!
Have a good weekend
Posted by Lythan at 12:10 pm

Oh so sorry to hear about your chicken Lythan :(

Wow this is a dream of a creation. Absolutely stunning.

What a gorgeous card Lythan. I do love this big flower. I know what you mean about reds thought - you wouldn't believe there are so many different shades. Sorry about your chickens departing on you. You did give them a happy life though. Lol x

Love your card, the big red flower is quite stunning!
I had fun doing this dare even though I nearly gave it a miss until I found the papers!
Judy NZ

Gorgeous card - I was so glad that you snuck some blackness in too.... Tis very fab.

That is mostly very pants about your chicken (hugs) I am sure that she had a good time living with you. Hope you are okay

Yummy... Reminds me that I have a bag of those gerbera flowers somewhere..I'll have to hunt them out sometime.

Stunning creation in red! love all the details!

Sorry to hear about your chickens! my nan keeps them too!

Sorry to hear about your chickie, but at least she was able to have some lovely time living with you guys - you do a great job with these feathery girlies, even though it must be heart-breaking to lose them