What day is it?

I have to use a diary and refer to it a lot.
It is not a lot of fun to look at at the moment as there are not many white spaces left.
I am seriously thinking of asking the Pope to fix Easter so it doesn't come so early and can be right in the middle of the school holidays.
That wouldn't help the number of days that have all day meetings followed by evening ones at the moment - but it would help.

All of which means my crafting will need to go on the back burner for a while... including this blog. I could have updated several times this week but have just been too pooped to type! So I'm just going to share my Salt and my DCM work for this week.
The theme for Salt is Inspiring Christian Women...
there really wasn't any contest for me as to who I would talk about.
Daphne was a URC Minister who was very young when ordained - 21 and so was a wonderful Minister to young people - because she was still one herself. She was good with all ages but I got to know and love her through various youth events. She was tragically killed, along with her two year old daughter, as they were driving away from church on a Sunday morning. A drunk driver hit her car. Weirdly I read her story in a Readers Digest article about a ward in a Cardiff hospital a few years later. The names were changed but the details were all spot on as Bethan lived on for a few days before her poor father had to decide to turn the life support machine off. He is once more happily married with a new family but thinking about his loss still makes me sad. And I can't believe it was 24 years ago now.

When I found out she died, having spoken to her a few days before (a rare phone call) I went through a rather dark night of the soul where I couldn't sleep for fear of being engulfed in grief. I was almost 19 and it was the first time I was old enough to really understand what bereavement was. I was on the Campus at Lancaster Uni at the time and early in the morning I went out to walk around to cry and ask God - why? And the trees looked beautifully green and the birds were singing and I felt that actually I would never know why - there wasn't any good reason why it happened. But that God was there with me - and Daphne - and her family, and that the big love that causes the seasons to turn and change is something that not even death can end. I suppose I learned that morning to be content in not knowing the answers but to trust in God. And it felt like the last gift that Daphne gave me.

Well actually describing the layout seems a bit trite after that - but I'll do so anyway. Its the sort of awkward pause that would make Daphne laugh - ok it might not be rude enough and she would laugh at anything but that is beside the point! 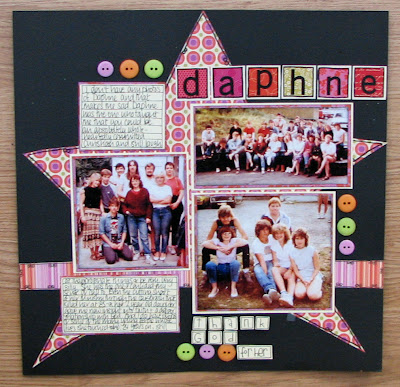 Scenic Route paper and stickers. Buttons from my stash. Doodling and make it yourself journalling spots. Here is a close up of what I wrote.

And then DCM today with my choice of subject.
I am woman
As its coming up to Mothers day in the UK here’s a chance to make a card that celebrates women and girls . So I’d like to see a card with at least one feminine image on it. And no Tildas, Bellas or Nellies.

I put that rule in just cos they are so popular at the moment and I wanted people to think a bit about what to do. My own personal challenge was not to use a stamped image. And not just because apart from said Tildas, Bellas and Nellies I don't have any... 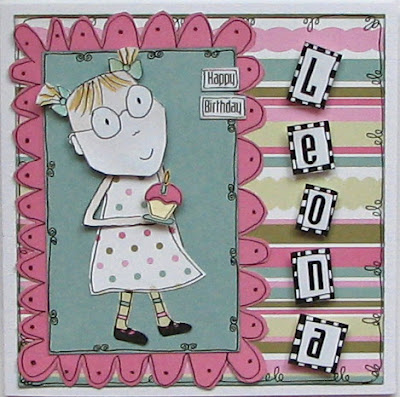 A gorgeous girl at church is having her birthday on Sunday so I thought I would try and make a Charlie and Lola type characture of her. I found a picture of Lola that I could copy in terms of style and made the face I drew a bit more like Leona's. The papers are all Piggy Tales - some paper pieced to make the dress and socks etc and she was coloured in with watercolour pencils. I found a font called Trust this One on Dafont (thanks to a UKS tip off). A wee hint of doodling later and I'm done.

So I do hope I have a little crafty time over the next few weeks but can't promise so au revoir for now...

Wow what a gorgeous card. Love this design.

Oh no, I shall miss seeing your marvellous work - but needs must, 'n' all that! Love your DCM card, your little Lola-style girl is really cute :0).

Fab layout and a great idea for the card. :)

Lythan, this card is so cute, and very clever :)
I really hope you find some 'me' time in amongst your busy days! We all need to recharge once in a while. Hoping to have a go at your challenge over the weekend!!
Take Care,
Carol x

Oh no - I just found your blog and your fabbie work as well. Life is one big busy rush sometimes. Never mind, take it easy and I shall keep a look out for when you are back :) I just love that Lola card - it's sooo sweet. I might just have a go at my first DCM challenge xx

Ilove it Lythan and so will the little girl who receives it.

Your Daphen layout if beautiful Lythan - I'm sure you don't need a 'reminder' of Daphne but this is a lovely way to record and share your feelings about her and the way she had an impact on your faith and relationship with God.

Take care of yourself while you're working so hard and we'll look forward to seeing you back when things calm down a little.

I usually surf around quietly, admiring but never leaving comments but I had to say how much I love your DCM challenge card. There is so much that is the same at the moment with all the popular images (yawn) that it is so good to see something completely original and all the doodling is fabulous. I am totally artistically-challenged so have to rely on rubber stamps and printable graphics in the main but you have inspired me to have a go at trying a "me" original. Thanks for sharing :)

I love that card... when I saw the examples, I just thought it was simply the best! Hand-drawing and doodling is fab and so liberating. Sometimes I think we rely too much on printed and stamped stuff... and on what other people think!

Lythan...I am not religious at all but your story about Daphne really moved me.
And please don't stay away from your blog to long as it really cheers me up!

What a cute card for Leona - great image!
Judy NZ

What a sweet card!

Anonymous said...
This comment has been removed by a blog administrator.
5:09 am

I love your work! I've passed my award on to you, the details are on my blog.

Lythan, I loved this card so much it inspired me to also draw my own image. The other thing though is that I adopted your fab doodled scalloping idea. I'm slighty worried that it could be seen as copying so I wanted to ask your permission before I put it on my blog. What do you think?
Lou xx

This is just a wonderful post Lythan. You made me think of all the special people who've been a part of my life and made an impression on me over the years. It's good to remember and to be thankful for having known them - even if we do feel cheated when they aren't around any more - for whatever reason. Thank you.

I love your LO and your dcm card - I so admire the fun you bring to whatever you do - the way you show that it's good to be serious - but it's very good to laugh too - you have a special gift, hun

Such wonderful originality - love the DCM card. A great post to read also.

Your narrative about your friend and Minister moved me deeply Lythan. You are lucky to have had such a wonderful influence on you - even if for such a short time. What a powerful legacy she has left that even after 24 years your love and respect for her shines through and touches other people. Lol Lynn x

Lythan...I am getting severe withdrawal pangs from your creative work!!
Hope everything is going ok with you and that you will be back with us all soon,x