Boy did I feel sorry for myself yesterday!
Phil and Carys set off from home at 5 to go on a giant chicken rescue. Phil went to the farm to help pick up 700 birds! Mrs Goggins and Miss Marple have now joined Mrs Miggins in our own little Hens Institute. That was the nice bit...

When I got up to the siren call of Lucky at 7:30 it was to find that actually it would have been a lot better if she had whined to go out several hours earlier. I HATE that kind of start to the day...
By midday Hywel and Emrys had been arguing for a few hours. By 2 all three of us were in different rooms being all tired and emotional. The boys usually get on really well but when they don't ...argh. By an hour after that things were happy between us. But it had all taken its toll so when a physically exhausted Phil and Carys got back they found an emotionally exhausted rest of us!

I am aware that living with teenagers could be a whole lot worse, but its a different set of challenges to little ones. Its not so much that they can argue better now - Hywel has always been able to argue his case and , frustratingly would often be proved right as he has always delighted in telling me. (yup, rows with that kind of 7 year old were always fun). But the difference now is that they are less likely to give in so any rows we do have seem to take all day.

Today was another day though and much, much better. the usual peace and harmony has returned and even the dog behaved!

Last night I was able to scrap - a lovely bit of quiet therapy.
The layout is 81/2 x 11. I do enjoy scrapping in 3 different sizes. I usually look at the photos and work out what size will be best for me. although the Scotland 07 pages are all 12x12 as they are in a special album. the others just go in the order I scrapped them.
Charrie at Scraptitude got a mention on the Creating Keepsakes page of the day and I went to have a nosy. there was a link to someone else's work and one of her layouts caught my eye as just asking to be scraplifted. So I did! 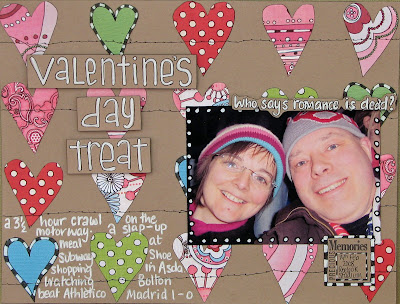 Mine has a few less hearts on as I would have lsot the will to live doing as many as she did!
I used an old Self Addressed kit which had Sassafrass Lass papers and Bling cardstock. All the hearts have been doodled over. I inked around using a Sharpie pen. I saw that idea on someones blog and it works well for fine inking. Then I did a little false stitching which I did deliberately wonky to look like my real machining!
Precious Memories stamp came from a big Costco kit. Title is hand written (yeah as if you couldn't tell).

And here is the layout I did on Tuesday 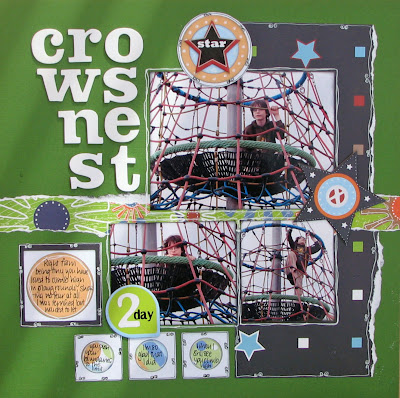 I used Cherry Arte Poolside Papers and Piggy Tales Hansel. The chipboard shapes are poolside too. Thickers, punches and lots of doodling completes the page.
Here is a tip.
If you are using lots of white gel pen on a page make sure it is completely dry before you put it in an album that way you will not end up with big white smudges on the edge of your cardstock.

I'll end with a special gift book that Phil has just created for me. there is only a cover for now but it may be a hit - what do you think.... 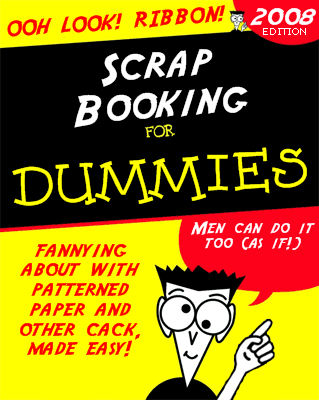 I love the valentines treat page, that is fab!

Can I order a copy of the book please? ;) Signed of course!

Great LO’s Lythan, they are always so bright and colourful.

Aww, I’m so pleased that Mrs. Miggins has some new companions at last. Hope they are in a better condition this time and that they soon settle in. I Hope things have quietened down for you at home too. Reading your blog reminded me why I never had kids!
Love Sue
X
PS. Put me down for a copy of that book. Lol!

hahahahaha Love Phil's new book! I guess we all know what he thinks of scrapbooking now then!
Sounds like you've been having loads of fun (and not fun) in your house - wait till Carys hits the slamming-door-and-stomping-up-the-stairs phase........
Love those LOs, I checked out the hearts one you used for your inspiration and I see what you mean about losing the will to live - thats a LOT of hearts.

Great layouts, especially like the Valentines one. The book made me giggle, very funny!

Anonymous said...
This comment has been removed by a blog administrator.
1:07 am