Single parents I salute you!

Phil was only away for four days but I am now exhausted. It is very hard to work full time - even in study week- and take care of everything that needs to be done on your own. I was not so much glad to see Phil because I missed him but glad because I wouldn't have to cope on my own any more. OK I did miss him too! But those of you who have to deal with children, work and pets on your own on a daily basis, take a bow because I am in awe!

I would have managed better if Lucky had behaved herself. I won't go into details in case you are eating but she lost her sense of being house trained this week... If she had been like this on her trial weekend she wouldn't be our dog now. That's all I'm saying. She is lovely but maaaaaaaan, she is pushing my buttons.

I managed to squeeze in un peu de crafty time as the French would say (if they had forgotten how to speak French obviously). Made a layout on Tuesday night and still haven't decided if I like it enough to photograph! Then yesterday got down to making my Daring Cardmakers card for today
Rhi chose the theme of
Plastic Fantastic
I dare you to look again at the plastic packaging around you and transform it into a brand new card. It could be food packaging, craft packaging or just something plastic that's destined for the bin or recycling. Trim it, die cut it, alcohol ink it, crop-o-dile it, give it a new lease of life then share it via your blog for us all to see. Happy Recycling!
I kind of got hooked on the idea that it had to be craft packaging. Actually apart from milk cartons I couldn't see much more plastic in the recycling box. So I used the cover from a box of stamps. I'll have to find somewhere else to store the stamps now as they will all fall out :)!

UNfortunately I couldn't get all the sticky goo off the back easily so couldn't use one big sheet as I had hoped. But there are three bits of the plastic on the card - can you spot them all? 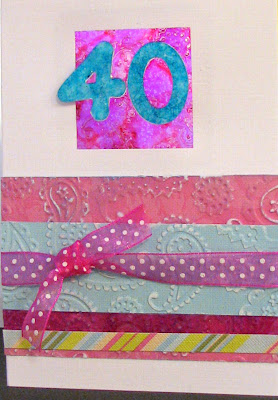 Once more, apologies for the photos. I needed to post the card through a letter box last night as it was for a 40th birthday today so had to take the photos in the dark. The large one shows up the plastic details better but the small one is truer to the actual colours.

1:I put a large section of the plastic through my cuttlebug using the new paisley embossing folder and coloured it with a red and a pink alcahol ink. The larger part was punched using the purple square punch which was stuck behind a pink square punch hold in the cardstock.
2: A small strip was sanded lightly and stuck just below the blue patterned paper
3: The numbers were die cut using Sizzix lollipop numbers from both card and plastic. The plastic was coloured with stream alcohol ink. they were sandwiched together with glitter stickles and then mounted with foam pads. This was v. tricky.

Two pieces of K and Co Bella paper were given the cuttelbug folder and sanding treatment. I added a tiny strip of another pattern and added the ubiquitous knotted ribbon - this is my all time fave May Arts one.
I promise I will stop doing these ribbons soon.

Actually Kristina Werner - the knot tying queen - uses a whole load of ribbon wound right the way round. Gasp! I struggled with that but then rationalised that I do have enough ribbon to do that. However I just can't get my knots to sit tight enough. So I cut two longs pieces and then stick them to the back first with DST. this gives me the tension I need. And more usable ribbon left over!
Posted by Lythan at 10:39 am

I'm another fan of the knot in ribbon - gives a nice finishing touch, doesn't it? This looks fab Lythan, lovely bright colours and lots of texture.

Anonymous said...
This comment has been removed by a blog administrator.
9:11 am

This is lovely Lythan, I was wondering whether you could put plastic through the cuttlebug, I don't have one, but I was curious, it looks fantastic - thanks for answering my question!! I'm sure whoever recieves your card will be thrilled. :0)

Hi - saw you on a different blog and followed your link - love your LO's :)

Anonymous said...
This comment has been removed by a blog administrator.
4:43 pm