As Kermit once sang

It's not easy being green

But it is easy to use it on a card.
Jozza chose one of my fave colours for our dare for Daring Cardmakers this week.
The dare is feeling green.
I want to see lots of green on your cards in any shade you like.

Usually I like to use it most with blue but this time I wanted a mostly monochrome look. 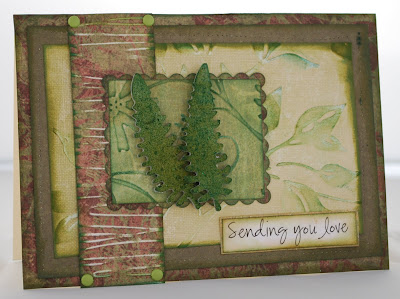 The ferns are grungeboard - inked with pine needles and peeled paint (same colours used everywhere). One is layered on top of the other.

to be honest it probably took less time to make than it did to describe it!

I've been to the orthodontist with little C today. She had her train tracks glued on (always makes me laugh when the orthodontist gets out his heat gun to set the metal bits on the teeth) ready for the rest next week. Now it is time to hit the sermon. Although I think I have found the title for my MA essay on the Spirituality of Alcoholics Anonymous (which is actually very interesting I'll have you know)
Posted by Lythan at 11:49 am

A gorgeous card Lythan - your layers and inking work beautifully. :)

I adore this card Lythan!!! Love those grungeboard ferns. x

Great card Lythan - I absolutely MUST have some of those Grungeboard ferns!! Lol Lynn x

Great card Lythan - I absolutely MUST have some of those Grungeboard ferns!! Lol Lynn x

Beautiful card! Love how you layerd everything. Thanks for stopping by my blog.
x Natasha x

Thanks for leaving a comment on my blog. I really appreciate you taking the time and trouble to leave a message. I love how you've inked the embossed card, it looks lovely.

This is lovely and I like the muti-layered look... Thanks for your comment on my blog... please feel free, anytime!!! Youwere right about lat week too!!!
xx

LOL, I have to giggle at you battling your way through your Costco paper stash! Lovely card and I really like the nature look. :o)

I really love this one, all those greens and the ferns.........stunning.
hugs
En xx

There's also an award on my blog for you Lythan. xx

wow Thanks for the description of how you made the card, I didn't realise that layer two was embossed I thought it was patterned paper.

Beautiful card as always Lythan.
The inked embossing looks great and so do those Costco papers…..go on forever don’t they!

This is so elegant - well done

Beautiful card, the colours are great :)