Yesterday was a fabulous day for my family as one child was baptised and one confirmed. Although the baptism was at Phil's church as that is where the kids go to church, as we were taking the service together, Phil suggested that I baptise Carys as he had baptised Hywel. It was a truly awesome moment. I am amazed I didn't cry as I cry at everything - but was pleased I didn't.

Photos will follow as the event was filmed rather than photographed. The church had a new screen so the whole thing was projected as it happened. Hywel and another girl at Church were confirmed and made members. that is another big step of faith. We had a little party at home to celebrate and both Carys' godparents were there. We made the mistake of having a lot of ordained godparents which means it is not always easy for them to come to things on Sundays! But both Anna and Sarah were there. We haven't seen Sarah for ages and it was both happy and sad as we all missed her husband Rob (the ordained one!) as he died 5 years ago from cancer.

I made some cards (obviously). I wasn't too pleased with the baptism one although I later added a pierced edge which helped. I had gone for tone on tone texture. The papers are doodlebug and so are the stickers. the cross is made using an Anna Griffin punch and a yellow circle one. 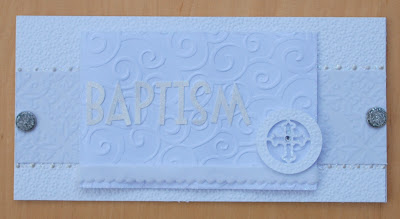 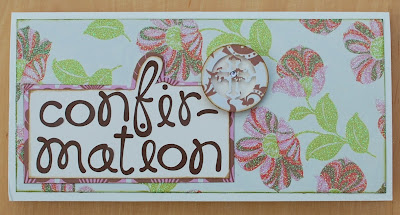 those stickers appear AGAIN on Hywel's card but this time in black with cosmo cricket get happy papers and a paper frill. This one I like!

Today after waving goodbye to the family members who stayed for the weekend (can you beleive they were all gone by 9:30?) I made a card for the Pink Elephant challenge using a sketch by my Funky Hand team mate Carol. 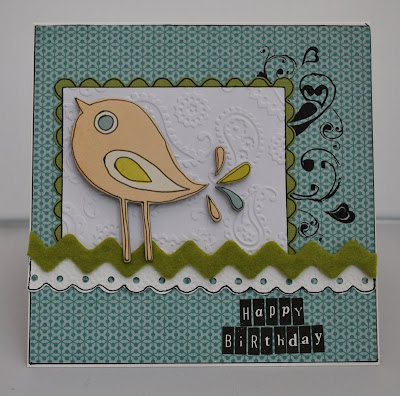 It uses Basic Grey offbeat papers and stickers, BG rub ons, a cuttlebug embossing folder, Nestability dies and Making Memories letters. And I even decorated the inside! 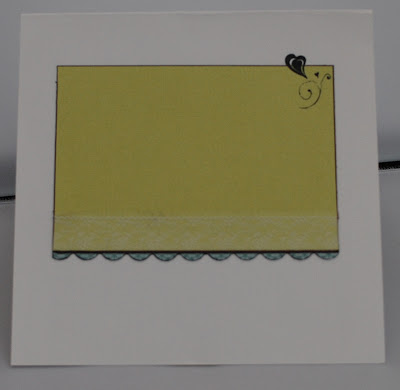 all the same stuff with the addition of some lace tape.

If this post seems a little rushed it is - as I have a hubby waiting for some late supper :)
Posted by Lythan at 8:22 pm

I love the card you made using my sketch Lythan. the colours are great together and i love all the detail :)
Thanks for playing along with us at TPE this week :) Sounds like you had a hectic weekend!!

Great card!! I love that bird alot! I am glad you enjoyed Carol's sketch this week. We all enjoyed working with it too!
Robin
http://thepinkelephantchallenge.blogspot.com

Loving this card!!! That bird is adorable! The sketch was really fun, wasn't it?!

Thanks for finding the time, especially after your hectic weekend, to join us at the Pink Elephant.

It sounds as though you had a wonderful weekend, it must have been made extra special by being able to share it with so many loved ones.
All the cards are lovley - and thanks for the reminder about the "hello sunshine" set - I must dig those out again

Great card, and congratulations on the baptism and confirmation!
Chrissie

Lovley cards Lythan, well done for fitting the word 'confirmation' on the card so neatly. I keep eying up that cosmo cricket paper - its near the top of my wihslist. I will pop over to the pink elephant challenge site and have a looksee

What a lovely day on Sunday - look forward to seeing photos. The cards are just right. x

Gosh Lythan, you have managed to fit crafting in around such a hectic week. super cards.
hugs
Enfys