thanks to the lovely shiny new white painted conservatory, a heavy weekend of work and then being away for two days I am rather behind (as well as having a rather big behind). BUT I have finally made AND PHOTOGRAPHED my Salt layout. Due, er, last Thursday. (Twas made Monday but didn't see much daylight until now!)

Hazel came up with a great theme.
Discipleship
Jesus’ disciples were called by Him and became His followers. Jesus final command to them ‘Go and make disciples of all nations, baptizing them in the name of the Father and of the Son and of the Holy Spirit, and teaching them to obey everything I commanded you. And surely I am with you always, to the very end of the age.’ (Matthew 28:19-20)

It too me a while to work out what I wanted to say. And I'm not sure I have expressed it clearly enough on the layout. But if Jesus calls people to be his disciples and we say we are not good enough, as we then doubting his judgement? And if we don't dare do that, then there is no excuse for not following. After all, the first disciples were a rum lot too - and look what he managed to do with them!
My layout is called Disiple rather than with the ship on the end because I had reflected more on what it means to be a disciple rather than doing discipleship. And I ran out of letters. If the letters I used had a question mark on the end, there would be one. But there wasn't. 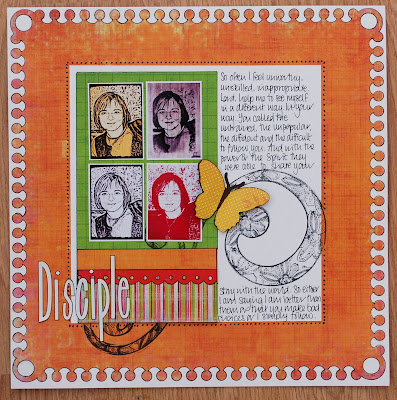 The photos are a recent one of me (now my facebook pic!). I discovered via Emily Falconbridge's funky blog this rather cool site that does funky things to you here
The papers used are white Bazzill; Pink Paislee Office Lingo and Dream Street Birdie Bits. The butterfly (yes, again) is more of the KandCo papers (OK might have been left over from the cards earlier in the week but it is a good symbol for being a disciple. Honest)
The stamp is an enormous one that was a lovely Christmas present from Sue H
What I haven't worked out yet is the best way to use it as it unmounted but far too big for any mount. Suggestions?
the letters are Chatterbox
And there is loads and loads of black pen outlining too.

Also last week the whole Funky Hand design team produced their goodies to launch the new download Huge Funky Love Wordbook
I'm glad I didn't embark on this project before I saw Anice demo on Ideal World and mentioned printing a pattern on the other side of your chosen letter. Doh! Never thought of that. So I did. The word books are ever so easy to put together and you just need a few more little bits of paper and embellisments to decorate them.

I have one photo of my grandparents wedding and my dad sent me a few of my parents wedding recently as I had to do a layout of a heritage wedding for an article (more of that when the time comes). I put the book together, used the Bind it all (found I had some brown rings - joy!) and added the bling afterwards. I ahve had this set of Prima say it in crystals for ages and hadn't used it so decided to treat myself to smothering it all over the book. The words on the right hand pages are from the explanation of what love means in 1 Corinthians 13. It is often used in weddings. Only this bit of the reading works for a wedding in my opinion but we usually do the whole thing!

There are a lot of pics now so I won't add any more words. Hope you like it.
Oh must just mention stupid brown ribbon that sticks up at the back for each photo. Boo to you brown ribbon. 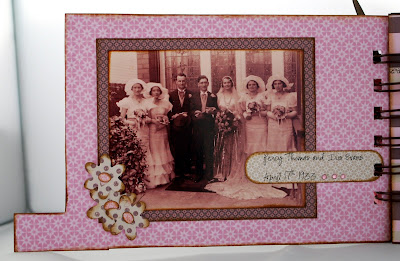 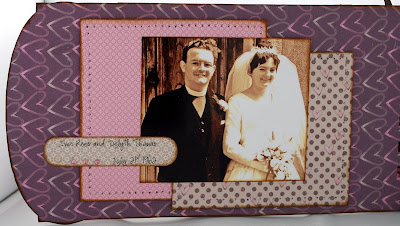 A truly beautiful book,Lythan. It brought tears to my eyes.
Kath

Once again, Lythan, you have done a superb LO for Salt and you have so captured how so many of us feel - what a privilege to be a disciple. Regarding the enormous stamp, I suggest inking and then placing card on top and brayering firmly. The funkyhand book is gorgeous. x

I have a couple of mahoosive stamps. I find they cling nicely to my cuttlebug plate. ;))

Love your layout Lythan, so heartfelt. And the album is so beautifully balanced, what a beautiful momento.

Once again you have created something that is just wonderful. The word book looks amazing and the images you have added to it are so lovely. Thanks so much for sharing it. I am so lucky to have you in my Design Team.
Anice xx

What a gorgeous album, brilliant idea to have the whole families wedding photos in one place

Beautiful layout for the SALT challenge! Adore each and every element and your thoughts on right on! Also love you album...I've been wanting to make one of these for ages and haven't found the time. Perhaps seeing your beautiful finished one will inspire me to get moving! :-)

Beautiful layout for the SALT challenge! Adore each and every element and your thoughts on right on! Also love you album...I've been wanting to make one of these for ages and haven't found the time. Perhaps seeing your beautiful finished one will inspire me to get moving! :-)