He is risen indeed!

its what gets said over and over again on Easter Sunday (congregational response in bold) and we never get tired of celebrating it. We were a rather small but perfectly formed congregation at my Harold Hill church this morning as we put flowers on the cross. We do this as a symbol of new life (prettier but not as tasty as the choccy eggs we had as part of the service) 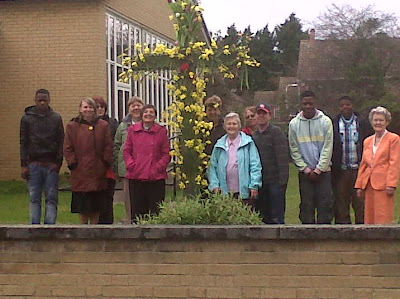 I was still feeling smug about having got up and walked up a hill to worship with the Salvation Army at 7:30 am. (Almost as good as being there so early to celebrate is being able to show off about it later. Not very Christian really I suppose...) Actually I nearly missed it having set the alarm on my moblie but failing to check if I had moved the phone clock forward (no) I woke at 6:55 anyway.

Then home to a lovely lunch, a spot of vegging, a little scrapping and a family game of Perudo. I finished off two layouts that have been percolating for a while... 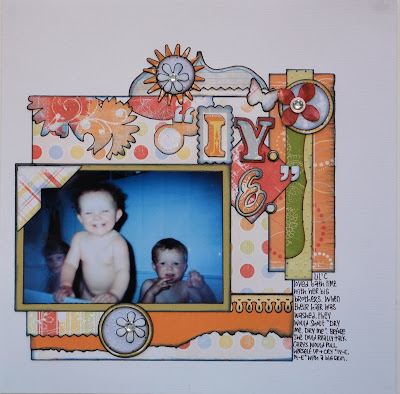 This is for the Sarahs Cards challenge blog where the theme for March is to use up old stash. This is the same stuff that I had out for Friday's card you may notice, but given quite a different look. It is mostly WRMK Whiteout with a tiny bit of green pattern paper from another Self Addressed kit and half a Pink Paislee die cut. The chipboard is all WRMK, the circles and sun having the letters peeled off and paper added. The white flowers and speech marks are American Crafts thickers. The stripy paper has glitter added to make it look pretty:) The layout is called "Iy E" because that is what Carys would say when in the bath with her brothers and they would cry out "Dry me"

The second layout is for the Fiskars sketch challenge 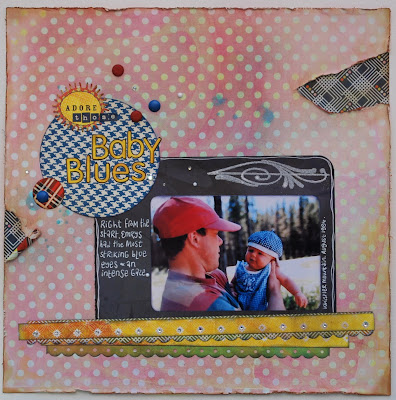 Emrys at about 8 weeks old in Canada. When Hywel was born I refused to leave Hartlepool for 3 months in case something happened to him. Emrys went to Canada at 6 weeks old. (Carys "helped" my parents move house at 2 weeks old).
All the papers apart from the big circle are from Basic Grey's June Bug collection. The circle is brand new October Afternoon (excellent service from the Craft Emporium - thanks). I used two Fiskars border punches, Banana Frog stamp (covered in white glitter), Craftwork card candy, Cosmo Cricket and Basic Grey letters and Papermania sticky gems. Oooh and some Glimmer Mist too.

Enjoy your Easter celebrations!
Posted by Lythan at 6:35 pm

fabulous layouts Lythan and Hope you had a lovely Easter
AllisonX

Just gorgeous LOs Lythan, love your entry into our challenge!!

Great layouts! love the colours you've used & thanx for playing along with the SC challenge!

Great page - love it! Thanks for playing along with our challenge at Sarah's cArds :) xx