Stop them throwing the kittens

ahh - but the starfish story has a sequel./.

Considering this, the traveller continued his walk along the beach. After a while he arrived at a place where a river ran into the sea and he turned back inland, walking alongside the river. He was still pondering the words of the starfish woman when he noticed a group of people wading about in the ... See Moreriver trying to catch floating objects and throwing them safely onto the river bank. When he got closer he saw that the people were rescuing kitties which were struggling in the water and floating downstream towards the sea. Though many of the kitties were thrown to safety, many others were washed out to sea, never to be seen again.

The traveller thought about this and thought about what starfish-woman had told him. He knew that it made a difference to every kitty saved. He also knew that he could not stop the sea from washing up starfish, but he knew that there was a way to make a bigger difference to all the kitties being washed away in the river so he called out to the people who were fishing out kitties. "Why don't some of you go upstream and stop people tossing them into the river in the first place?".

so... why not go upstream and see what is stopping you writing the essay in the first place... UNPLUG YOUR INTERNET!!! ;-)

I did take a break late afternoon yesterday and I'm so glad I did because I was not only able to plug away at the essay all evening BUT I also managed to complete my Salt layout too. The theme is honour and respect focussing on Romans 13:6-7. I wasn't sure about the reading so looked for others that mentioned the words and found them in 1 Peter 2-17-18. Which put me in even more of a quandary. Because there are times when government does not deserve honour and respect and as a nonconformist I feel it is important to uphold my right to speak out when those in authority are wrong. As it says in our rather excitingly called "Statement of Nature, Faith and Order" We believe that
Christ gives his Church a government
distinct from the government of the state.
In things that affect obedience to God
the Church is not subordinate to the state,
but must serve the Lord Jesus Christ,
its only Ruler and Head.
Civil authorities are called
to serve God's will of justice and peace for all humankind,
and to respect the rights of conscience and belief.

While we ourselves
are servants in the world
as citizens of God's eternal kingdom.
PLUS the 1 Peter reading has been used to denigrate people through the centuries in a way that is unjustifiable. But leads to a further question - if slavery is wrong, despite its acceptance here, what else in the Bible could and should we disregard? And there are many and various answers to that. Which is where my layout took me really! 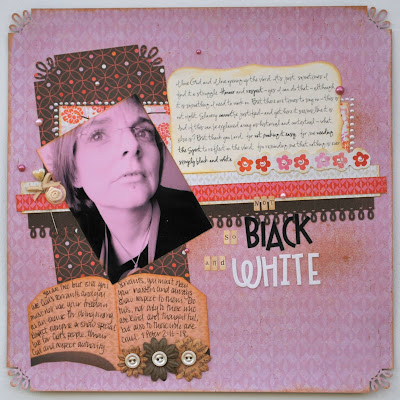 It was going to be all in black and white but because the photo looked awful in black and white (says Revd Vain) and the pink of the backing paper is really exactly the same, it kind of unfolded from there. The papers are all Crate Paper and I used Martha Stewart punches; Making Memories and Doodlebug stickers; Liquid Pearls; Prima gems and oodles of glimmer mist.
Doing the Bible took ages. That is the third print out and for some reason the real writing wouldn't print at all - I was going to cover it up anyway. But I also made a mistake in the translation I used which reads "servants" and not "slaves". Most translations have slaves. 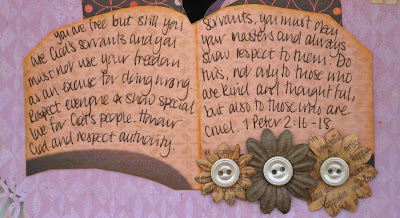 and hree is a close up of my reflection which i wrote on the computer using the Susie's Hand font and cut with a Nesties 8 die. 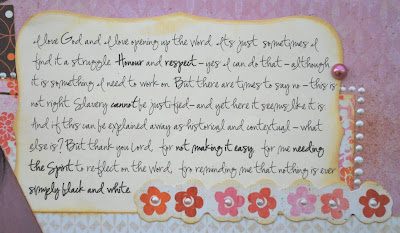 Lovely layout Lythan and good comments (I agree, we should speak out against those who would abuse their power)...I understand that some Scripture can be difficult to understand, however, we can trust that it is all accurate and given to us for our benefit. XXOO

Very thoughtful and thought provoking, Lythan - thanks for sharing your thoughts and a lovely LO x