Sorry everyone. One moment it is Monday and there is loads of time for blogging but you are just too tired from a demanding weekend to do it, then the working week starts, then there is a day off in lieu to celebrate your son being 20, then more work and suddenly it is Firday and a whole two weeks have gone by without updating.
I get a bit fed up with people who don't update their blogs very often...
Sigh.

Anyway - quick recap of my life in the last fortnight: work; work; work; walking by the sea most mornings with the dog (not this morning as she was naughty last night and although it was Phil who got up and sorted everything out and then slept on the sofa so he could stop more whining, I felt tired in commiseration. That man is a star I tell you) (BTW the whining came from the dog not me, in case you were wondering); getting up at 5:30 to drive to Upminster for the GSCE results; congratulating daughter on 3 A's 6 B's and some C's (it gets really complicated these days and it may in fact be 5 1/2 B's but I have stared at them enough and keep forgetting); holding her hand when her sixth form place was in the balance and rejoicing when we found it was all OK; celebrating with the Romford Church at being 350 and doing my little bit to help things run smoothly; feeling smug at having bought tickets to Plymouth Aquarium online which meant that we could walk past the long queue and go in another way (we have to go to some sort of aqaurium on Hywel's birthday - it is the law apparently). Um, that's about it really.
I have squeezed in some crafting so will show the cards today and the layouts another day.
I still haven't found the optimum time for photography and everything has a blue cast on it at the moment. Admittedly my room is very teal blue but it shouldn't affect it that much surely? 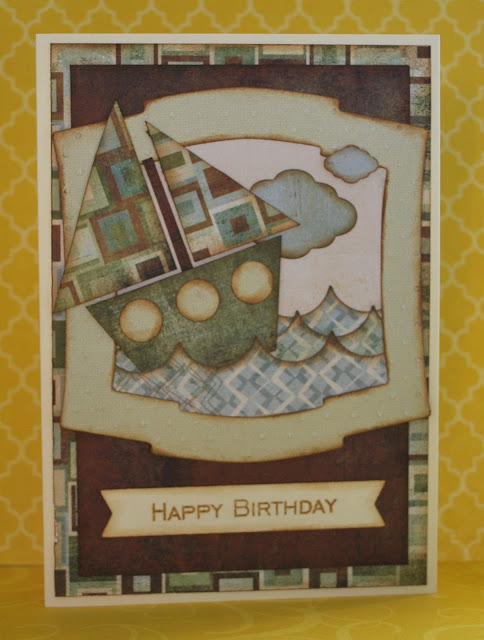 I had die cut a scalloped border for the waves but then realised that the bits the scallops were cut from were move wave like and used them instead! The papers are from Basic Grey Archaic 6x6 pad and the sentiment is from Imagine That.

And now for this weeks... Rein asked us to Focus on Flowers
which almost gave too much choice!
I decided to use a Studio Calico 6x6  pad  and see where it took me. 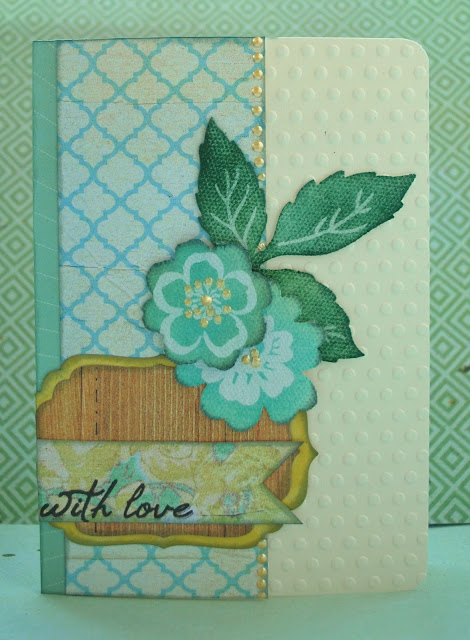 I added in some Prima colour in canvas flowers and leaves and a lovely new buttercup yellow liquid pearls. I do love liquid pearls but have the to remember not to touch too often! The words are from a Marian Emberson set.

Such beautiful cards! The flower one is lovely, but the boat one is the star for me! The waves look so realistic!

Congrats to your daughter on her results and on her place for sixth form! And belated congrats for your son, too. It's such a worry waiting for results, isn't it?

Have a good weekend!

Lythan, this is gorgeous card! The texture and layout. Stunning work!