Phil is having a new purpose built chicken run delivered this morning. Or afternoon. Phil is not here. Guess who has to wait in? (OK yes, there are three teenagers in the house but we are indulgent parents and they don't really do mornings). I was allowed out to play (aka morning prayers and coffee morning at church) until 11 but I am now in. Actually one of the advantages of living opposite the church is that I can be home in 2 minutes so having to come back isn't such a chore.

I'm also waiting in for inspiration with regards to my sermon. Its the first one at the church I didn't preach at last Sunday so its always an extra bit nerve wracking. Plus the reading is a part of John 6 where Jesus does an awful lot of talking. What he says is good but to be honest it would be a lot easier to think about, preach about and listen to preaching about if there had been a bit of action thrown in to break up all the talking. Perhaps there was and John decided to take it out as it wasn't serious enough. Or maybe people could concentrate for longer in the olden days. Its the bit where Jesus has done the feeding of the 5,000 but the crowd comes after him wanting more. "Show us a sign and we will believe you are from God" I'm sure Jesus sighed inwardly. Doesn't feeding you all with a few fish and some loaves count? They want him to give them bread from heaven and he says that he is the bread of life. Its good stuff. Just a bit dense - in the sense that German bread is dense. Anyway, enough of that, how about some cards?

Can't show you the layout as I forgot to photograph it so I'll save it for another time
Its the beginning of August (yikes!) so it is colour challenge time on Daring Cardmakers
Kathy found this lovely photo 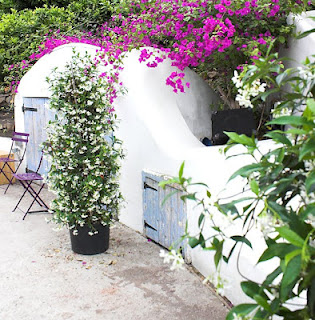 being too lazy to print it out (!) I decided to stare at it a bit and then go upstairs and see if I could find any papers that matched my memory of the colours.
Here is take 1 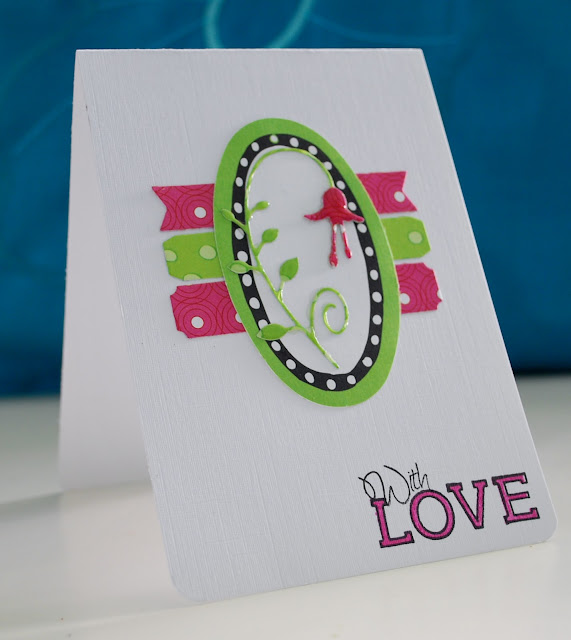 the colour of the ink used in the stamping is close to the colour of the pink paper in reality which has come out a smidge brighter than in reality. And I am sure it is nearer to the colour scheme than it looks here. Trust me. (ish) This is a real something old and something new card. The papers and die cut oval are from the Scenic Route Surpise collection which came out in 2008. (Still love it but really ought to use it up now). The Memory Box fuchsia die and the two sets of stamps are new. "With" is from the Imagine That set Hello Sunshine. "Love" is from an American Crafts set where you stamp the outline first and then add colour with a second stamp. Expect to be bored by its use soon. The flower head was cut multiple times and the whole flower covered in glossy accents.

I thought I would do a second as some of the DCM gang are away at the moment. 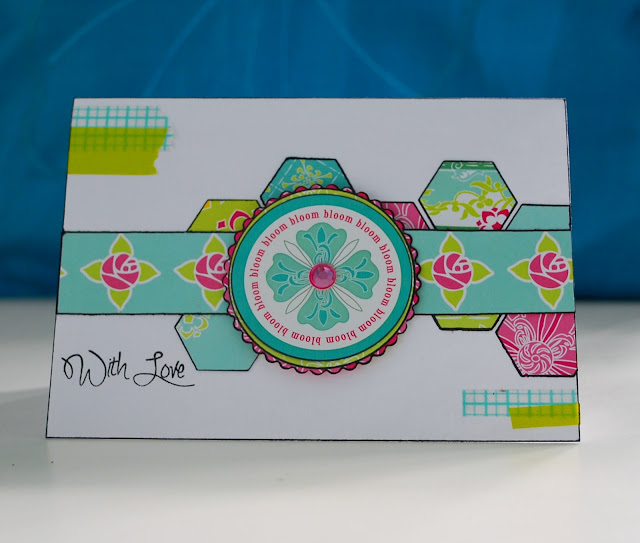 I used a Dienamic hexagon die, some washi tape and papers and stickers from Cosmo Cricket Delovely (another oldie) and the same Imagine That stamp set as before. A prima gem in the middle and that is that.

Since I started this, the delivery has come. It is big. It is all on a pallet. We have gravel and the pallet carrier thing was sinking in the gravel so now the pallet is on our driveway. I might need to go out and get a padlock for tonight in case someone wants to steal a chicken shed before Phil comes home again!