And not only because it is Daring Cardmakers Launch Day!
If I can be allowed to gush - and this will be a very gushy post by the time I have finished. I am amazed by the talent on our team - and humbled to be part of it. We share what we are doing during the week and every week the bar gets raised. Not so far that it stops being something other people can join in with (because there are so, so , so many talented cardmakers out there, many of whom contribute to what makes the Dare blog so much fun) but I think we are all enjoying the creative challenge. And long may it continue.
At the same time we are saying goodbye (and hopefully just for now) to Debbie. As well as being a talented card maker she has been a great support to the rest of the team and will be much missed.
Here are my contributions for the week in detail.
Frosty the Snowman 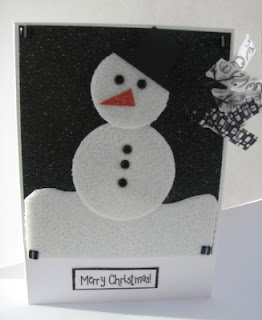 was made using sticky backed white vivelle for the body and snow. Black brads for buttons and eyes, glitter card for nose and the background is black glitter card which I found in a box and it is awesome. Ribbons from stash. Bit cheesy but fun! This is taken from an idea in Papercrafts Nov 2006 edition by Alisa Pargetter. Mine is pared down due to the colour requirements but I like it! The edges are actually straight - the black lines are round the edge of the card but I have managed to photograph it slightly squiffy as usual. Card, pen, button, sticker is all it takes and I may make some more like this next year!
But what makes this friday so fantastic? I ahve just been to Carys' school assembly. Parents are not usually invited to Assembly but we were told she had won an award and they wanted us there. I thought the award was for someone in each year group but it turned out we were the only parents there because it is a whole school award. She has won the Citizenship cup for this year. She was nominated for two teachers (and not her class teacher) because she helps other children, especially those with special needs by reading and explaining things to them and she always says hello to the teachers when she passes. It was wonderful to see how pleased everyone else was with her especially after her suffering some bullying last term (by boys not girls!)
Here she is with us and with the Headteacher and Mrs Sorrell, former Chair of Governers who donated the prize. My face might be red becasue I sniffled my way through the whole assembly like an eejit! 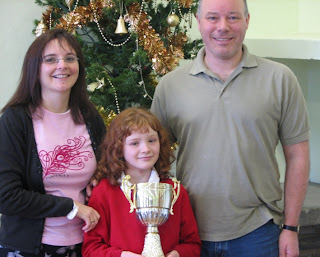 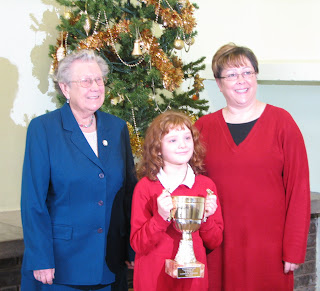 Oh Carys, well done, you have made your Mum so proud by being such a kind, caring and thoughtful person and I am so pleased that this has been recognised by your school giving you this award.

firtly many many congrats to Carys - you are a lovely, caring girl who deserves this award and I know your mum and dad are sooo proud of you.

Lythan I love your cards for this challenge - I have to say the manger one is my fav of all of them. well done it works brilliantly with the colours xx

Woohoo! Way to go Carys! That is a fantastic achievment. It is fab that all your effort and hard work has been recognised. Your Mum and Dad are soooo proud of you. Well done you!

Lythan - fabby cards (as usual) I love the nativity one but the snowman one is just so cute :)

Oh what a fantastic piece of news. Carys, you are a very special person indeed to have wone this award so a HUGE WELL DONE form me.

Lythan, no wonder you're proud of her, you are raising a remarkable young lady there.

And your cards aren't bad either! ;-)

What a proud moment for Mom & Dad with the Citizenship Cup !

& your black & white Christmas cards are very inspiring for me ! lol

Congratulations to Carys - what a fab award to get.

And congrats to mum for raising such an addition to society :-)

Wow Carys, Well done, it is lovely that you have been awarded this cup, You must have made many of your fellow students feel so special because you took the time to be a friend.
and to the very Proud Mummy,
Take a bow, I know you'll smile each time walk past that gorgeous cup, and remember why Carys recieved it..
Your cards are just gorgeous Lythan love them both, esp the nativity..

Oh, Carys, what a lovely thing to win! Well done to you for being so flippin' great and well done to Mum and Dad for having such a special daughter!

Lythan, I love your cards this week, especailly the manger one, even though I don't do religion - it's just so symbolic and classy, yet fun!

And your manger card is my favourite christmas card EVER! I love it!!!

Well done Carys.It is great to see her awarded with such recognition. What an amazing beginning to her xmas days!!

Lovely cards, as ever..

yay Carys !!! well done sweetie pie ! What a good kind girl you are- look how proud you have made your Mum. Lovely photos Lythan.

WOW Well done Carys You deserve this award.And your mum & dad are so proud of you.

Lythan - what goes around comes around and this is reward for you all for bringing your daughter up to be caring and helpful to others - sadly a quality often forgotten in this fast and furious society we live it in today!!!

Fantastic cards Rhi, and what great news for Carys well done you must be so proud.