I went to a meeting last night about the Square Wheel Project in Romford. We now have premises (woot!) BUT the young people there were anxious because it is in the "chavs" territory and they are "alternatives" and were worried (seriously scared looking) about their safety. It made for an interesting and serious discussion - the police are involved and aware - but we also noted how it was the same for those who were going to youth clubs in the 70's. And then we got talking about what the groups were and the sub groups. Wish I could remember them all now - hiphops, emos, goths - they listed about 15 or 20 different groups delineated by what they wear and what they listen to. One of the lads at the meeting came in wearing the biggest full length leather coat you have ever seen (cos he is about 6'2 and it was full length on him). Oooh I did covet that coat. See scratch my surface and there is still a little bit of Goth left under there (and still a lot of black in my wardrobe). And beneath the Goth lies the Headbanger...

Which is all a hugely long and rambley introduction to the dare cards this week. But if Saffa is going to call it heavy metal then she has to expect a walk down memory lane to the time when all I would listen to was Led Zep and Rush and jug about like a mad thing at the Coach house in Wind Street, Swansea on a Friday and Saturday night. Happy days.
But I (just about) managed to put such thoughts aside and concentrate on yer actual card making. As Saffa said
..no I don't mean rock music! I would like you to make a card on any theme you like with the rule that it must include something metalic...thats all!You could use wire, charms, foil or even metallic pens. 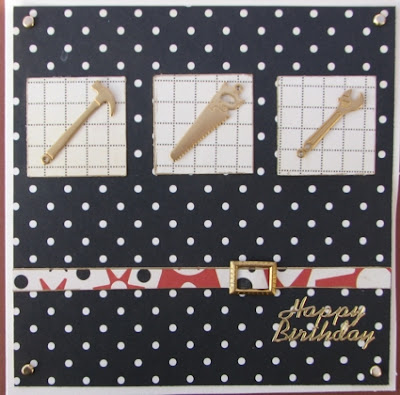 This card kills two birds with one, um, card. On the Self Addressed forum we have been challenged to do male cards. And here is one using more of the scrumptious double sided scenic route paper (every one a winner ladies and gents). Plus 3 charms, four brads and a buckle from Carolyn's shop and (cough) a peel off. Well it is metallic. 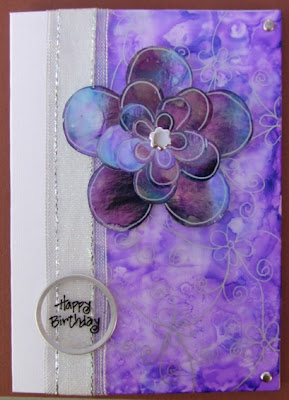 This one looks better on here than in real life I think! I reckon it is because of the way the light hit the alcohol ink covered metallic card! So we have flower font flowers cut out by Jimbo and then inked. Underneath is inked acetate with doodles done with silver metallic pen. On the left are two metallic silver ribbons and a tag which si from carolyns again as are the two silver brads. All in (to round off the post nicely) silver and (almost) Deep Purple.
Duh, duh, duh, duh,nu, nu, nuh ... repeat to fade....
Posted by Lythan at 9:54 am

Yes I can see that the first card would work easily for Father's day theme etc ! Great colours all ! & the alcohol ink background is just wonderful & genius to me ! lots going on wonderfully there with doodling !

Did you try the coat on? It sounds fab. Good luck with the young 'uns. Gee but I'm glad I don't have to decide which group to belong to - I couldn't do it the first time and I still wouldn't be able to pledge allegiance only to one lot!

Love the little 'tools' on the first card and the way you put them in their own little windows. And clever to use the two colours of purple that way on the second - alcohol inks are looking more and more interesting!

love them both, fantastic cards Lythan... but that alchol ink one.. hmmmm, soooo clever.. love the effect..

Fab card for men. They are so hard to cater for.
Love the alcohol ink one. My fav colours, purples & lilacs..

love that card with the tools - i'm sure i have those in my scrap stash !!

love the alki ink card Lythan and gosh darn you stole my idea of teh male card as I was going to do something similar :-) - great minds.....

Both cards are brilliant, but the 2nd with the alcohol inks is gorgeous xx

Hi Lythan
Thanks for your comments - I do understand what you were saying and am very flattered! (BTW I have named it Messy) THANKYOU xx

LOVE the results you have achieved with the Alcohol inks - I have mastered them on glass and non porous - but the paper - need to try harder!! Fab results here - you clever bunny xxxxxx

Hiya, just came upon your blog, and thought I'd comment on your biblical journal cards, love the words and how you've designed them. "Faith" is truly one thing we all need. :-)