Had a pretty good weekend too though. As Phil was poorly (and saving himself for church and the match on Sunday), I had to take Carys and Hywel to the science Museum on my own. Emrys was "devastated" at having to stay at home. we had booked one adult and two kids to go to the computer games exhibition. Embo didn't want to go in so I was going to stay out with him and take arty photos (he didn't know about that bit). if I had thought I could have booked for us to go to IMAX, but it is just as well I didn't cos I couldn't have taken just one of them and left the other outside. that is why Emrys stayed home in the first place.

There was a slight wrinkle in the plans as there was no Circle or District line on Saturday. But the friendly Railway man said we could get the 15 bus from the Tower of London (where we get off the train) to Piccadilly Circus and the tube from there. I never get the bus. I'm scared I will miss the stop. (yes I know, big wuss) But thanks to the man next to me we managed that ok. And what an awesome bus the number 15 is. It goes through the banking district, round Trafalgar Square and up Regent street and on to Marble Arch. I shall get that bus again!

Science Museum was pretty good. I will be using these photos in a page called "but is it science" becasue as far as I could see I just paid £19 for the two of them to play arcade games for 1 and a half hours. (I just can't do them. Yes i know, big wuss). still a bit of nostalgia for me. 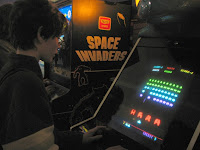 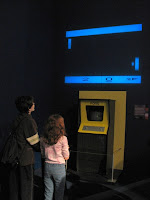 And the picture of Pong is taken before they played becasue Carys whupped Hywel (and me but that was a given) and he always wins computer games.
did fancy the look of the new guitar one and the Wii though.

Yesterday I tidied the craft area and today I untidied it again. Craft Day in my house! I caught up with my art cards 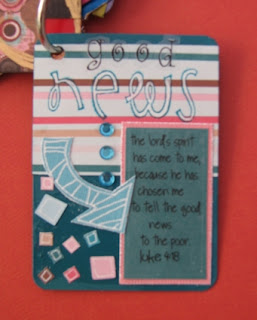 This one uses an ancient SA kit and some purple onion stamps that I coloured in with white pen, homemade arrow a la Elsie (I wish) and my Poudland gems 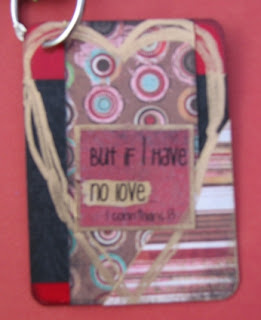 And this weeks using BG Blush and oodles of Krylon pen. Emily Falconbridge has left me a comment which is so nice of her. Imagine her sitting down and scrolling through all the links to art cards that people have started. how cool is that!

I have also got ready my class for the Scrapstars cyber crop next weekend. V. nervous as haven't done one before and worry that it is a little too simple. And made a scrap page. Another 12x12 one. still not sure about doing them that big... 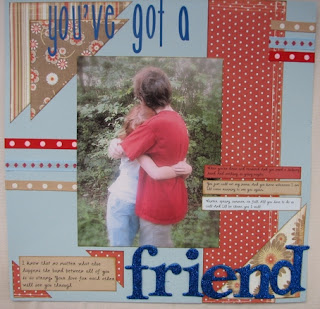 I took this photo at Little Dunmow in September and have just discovered Picasa so am playing about with all my piccies. love it now it is soft focus. the three small strips are some lyrics from the song. Here is the journalling close up - and it is in focus!

because my camera is better at having small bits cropped than coming up close apparently. The font is CK elsie. Papers are all Crate Cowgirl. Old chatterbox letters from an SA kit and the glitter chipboard was made by me thanks to a tip on UKscrappers. Acrylic paint, then mod podge and glitter. (I have some extra fine from Stationary Box, it is brilliant). But that glitter gets everywhere as you can see from the close up

.
I'm going to round off the day with trying to get on with my Daring Cardmaker challenges for this week as I have loads of work all the rest of the week. Still Monday will be back again soon!
Posted by Lythan at 6:22 pm

When I had Mondays off work it never seemed to get to Monday quick enough. Now Im back, it always seems to be Monday!!!!

Love the Art Journal cards. I'm stumped with number 4!!!
Particularly love your Elsie arrow, Ali E is big on them too!!!

Ohh I love the science museum, can i come next time? please? Please? Pleeeeeeeeeease?!!!

I have a Wii and trust me it is sooooooooo much fun! Feel free to come up and play!

Gorgeous cards, they are such fab little pieces of art! Science museaum sounds fabby, can't wait until the boys are a little older and we can take them on a 'day trip'...

PS yes, It's Bruce on my blog (any old excuse lol)

I'm worn out just reading through that lot!

Sounds like you had a good time at the Science Museum - it's ages since I've been there. I love playing the tourist and taking a bus ride around London - and my most fave trip is to go down to Greenwich on a tour boat!

LOs and crafty bits gorgeous as always. I've started my Scrapstars class by doing the actual "makins stuff and taking pics" bit but that's all - I need to find some time to do the writing now...

I want to go on the 15 bus route when I get a minute, it's one of the new heritage routes to keep the Routemaster lovers happy.