The Hills were (just about) Alive with the Sound of Music

I am anal about being late for trains, cinemas and theatres. Particularly the last as they don't let you in if you are not there are the beginning. So I was not much fun to be with when
BUT we arrived at 7:50 and were allowed in! Thank you so much Palladium Theatre! the children were just being introduced to Maria and the whole thing was fab, fab, fabby
(apart from coughing man {I gave him my bottled water as he was coughing through "Something good" one of the best and quietest songs. He gave it back to me at the end of the night. Cos I so want his germs obviously} and the flying saucer at the end. I'll say no more so as not to spoil it for those going to see it )
Connie Fisher was superb - her voice obviously is showing some signs of use but she can sing and dance and act. And she is very good at smiling. The captain had a beautiful voice. Not quite the simmering under the skin passion of Christopher Plummer but I think that is hard to do on stage with about 3 lines anyway. The children were awesome. ooh I'm still so happy.
I always love SofM because the plainer girl with no money wins! And I'd like to go again now (and see the first 20 minutes)

And its dare day today! I enjoyed being called the "lovely Lythan" last week and this week it is the turn of Ravishing Rhiannon (best I could come up with Rhi!). Here is her dare

I dare you to make a card with an aperture in it, it can be any shape you like and can be see through or have something covering behind it. It could be a ready made aperture card or lots of small windows punched out, diecut or handcut or one large window.

Well, I have a lot of Self Addressed aperture cards to use up and some new Stamps Away stamps to be used (ok so I bought the punctuation and the days and the journalling spots. But they are lovely) and this is what I have come up with. 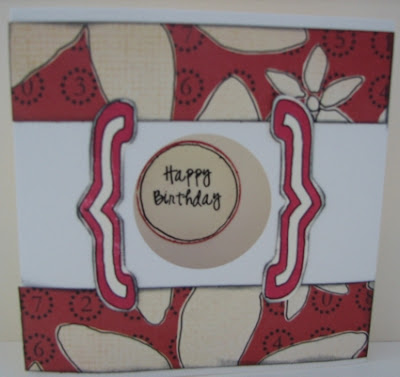 Chalk eye ink, a circle punch, computer made greeting, distress ink and black pen, a teeny bit of Scenic Route (I think) paper et voila! Will be making more of these.

For the other card I was inspired by Carole Janson flowers and edge of paper curling technique. 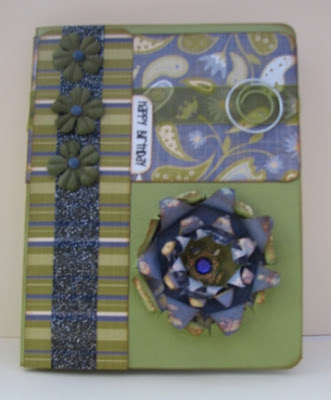 The papers are chatterbox (which I said I would never use again but they are probably v. good for this idea and I love these colours so much), Prima flowers, Bazzill brads, ribbon from stash and a computer greeting 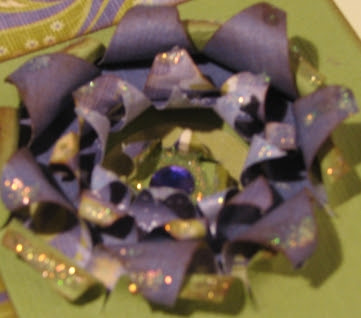 I just can't get a good close up of the flower. But here is what I did. drew a circle on the actual card. Cut through the middle, chopped most of the bits off, painted with water and rolled back the edges around a pencil. Cut a square of chatterbox paper, did the same thing, then stuck it through the middle. Distressed the edges. Did the same with the next two layers but distressed before stuck them on. So you are left with a small aperture through which you can see a tiny flower part (just cut and curled the edges, not through the middle for this) and added a diamente. And finally some sparkly glitter glue!

Incidentally, my Poundland has got kits including buttons and diamentes in at the moment. Some of the stuff in the box i will give away but the diamentes are fab!

I'm not sure I spelt diamente right but my US spell check on my blog wants to put parliament instead...

OK back to service planning. Its the reading about the body of Christ where bits of the body try to say they don't need others this week, which is always a favourite (I Corinthians 12:12:31 - it is worth a read here
Happy crafting this weekend if you can!
Posted by Lythan at 9:59 am

The musical sounds glorious. A special memory for you all. Your cards are lovely - the flower one with all the curls is special!

Oooo I'm ravishing, how fab is that! Gorgeous cards both of them, the curled paper flowers are just stunning.

Glad you made it to the sound of music and they let you in!

....ooo The Hills are alive....you lucky thing..tis on my list of things to do

I love the paper curling fab

Lovely card Lythan and its given me some insperation on how to use some of my S A stamps.

I hate being late for anything!!
Love the cards. I have no pre cut aperture cards at all. I used to from my cross stitching days, so I have had to cut my own for my card & the original one which the glue is almost dry on!!!

Fab cards Lythan - I'm soooo intrigued by the flower one - how clever ARE you missus rev?

Glad you enjoyed the SoM - even with all the getting there hassles!

Wonderful cards and the pp is fab!

SoM is one of my faves too. I was in the play in middle school as one of the nuns and had the hardest time with nerves and trying to sing 'flibbertygibbet'! Glad you had a great time!

Oh SoM sounded wonderful, had a little chuckle about the coughy man giving you back your bottle..
You have excelled your self with these cards, both are brilliant esp the curly flower one.. Oh Yum... You're amazing at this...

So glad you enjoyed Sound of Music ! lol

& your curled end flower card idea is wonderful - might have a try at that one day ! lol