Yeppers today my middle one turned teenage. It seems like only yesterday that I was watching 4 weddings and a funeral in the cinema and laughing so hard I thought I would have the baby there and then. Or being stitched and biting my hand and then when Phil said I could bite him instead doing it so hard he swears he can still see the bite marks. Or being slightly ticked off when Phil got out his sandwiches and switched on the tv to watch the cricket in the delivery room ("but you two were both sleeping. I was bored") Ah happy days.

And now he is 13, my little Emrys James. Who I thought we might call EJ but somehow never did. It was always H and Em. He was the cuddliest, most kissable baby (until he went to school. That was the last hug given willingly unless he is sick). He was a beautiful boy too - very photogenic. Could easily have been a milky bar kid (except we boycott Nestle). He is now shy, very funny, very clever and loves to take care of his sister unless he is winding her up to screaming point. (I exaggerate not).

He loved his new computer games; the new school bag and pencil case he asked for(!) and his handmade toys that he is displaying here. Carys made him L'il Emrys and I made the felt cat having been inspired by Tracie Hudson's creations. Mine isn't quite so good (by about 6 miles) but its nae bad for a first go. Carys wants to make a mouse now 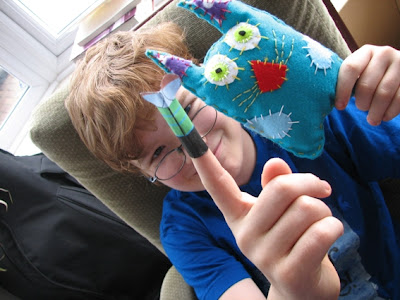 We spent the day bowling (I was last. Oh the shame) eating McD's and watching Meet the Robinsons in the cinema. And Emrys was starring in it! Well the kid Lewis looks like Emrys did when he was little. It was the quirkiest Disney film I have seen. Laugh out loud a lot of the time. Methinks the villain was based on Count Olaf from a Series of Unfortunate Events. Which is cool
Then it was home to hanging out (writing sermons; going to the library and supermarket); lighting candles and eating cake and watching Dr WHo 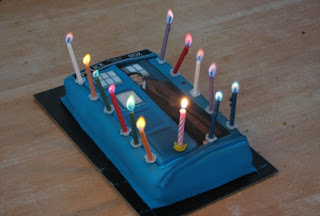 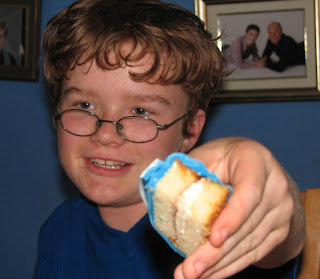 I leave you with the card I made for my friend Sue's niece. Now at Easter I took photos of photos of Hannah to use on the card. And forgot all about it. And deleted the photos. And Sue was going to scan them at work. And forgot. So it is a cutie pie pink and sparkly number instead. Now all it has to do is get to Swansea in one piece in time for Nerissa to give on Tuesday. If not, Sue will have to print out this photo... 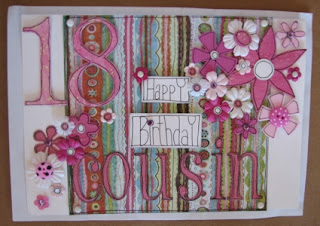 Oh boy, sounds like it happens all too Quickly! Happy Birthday EJ!
Oo fun cat :) Loving that card also, I like the middle bit and the way you have done the flowers. Great work

I love the card, it's sooo pretty and all those flowers are really lovely.
How cool is that felt cat too!!
Melx

Happy Birthday Emrys! Wow 13 years and you can still remember the stitches that accurately *gulp*

Ps Im soo envious of the Dr Who cake, WOW!