Come back and finish what you started

Well I can't just have half a point can I?

I have now made a card using the same template 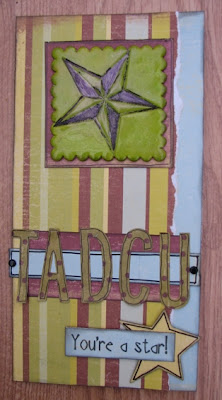 This also covers another Bex challenge - to make a Father's Day card not using the word father or dad. So this is for my dad using the Welsh for Grandad - and the name my kids call him. The paper is all K and Co Neapolitan Scrap Pad to Go which may come as a surprise as most of the colours look girly in the pad, but there are some great masculine papers too. I used a Ranger Dabber on a piece of chipboard and then triple embossed it with UTEE, sticking a Purple Onion star stamp in on the last go. the black didn't really work so I coloured over it, botched it up a bit and so used some Art from the Heart pigment powder to soften it again!. Letter stickers from the pad, QK star, printed sentiment and a couple of brads to finish off. Plus my usual ink and outline thing.

And then I did a layout for the Bex forum comp which is "proud". I went for being proud to be Welsh. And then went down the stereotypes route of things that made Wales, Wales 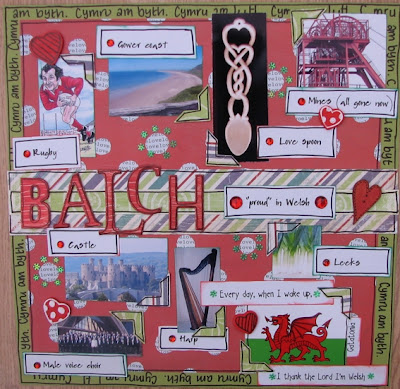 I took the photo of the Gower coast which actually looked even better than it does in the photo from May 06.
I covered Heidi Swapp letters with pigment powder/paint medium. Because the letters had a white coating they ended up stripy looking, which I like! The heart button was painted that way too.
The colour palette was based on the Welsh flag which makes for a bright layout!
I used one of my sheets of Elsie paper, coupled with two of the Crate Paper Samantha range. I added a few green sequins and some more wooden hearts (already painted) which I doodled on. And there you have it. If I'm honest, I much prefer all the other layouts in the compo but I am glad I have done this one.
So lets all sing along with Cerys and Catatonia
Every day when I wake up, I thank the Lord I'm Welsh.

both fab,love your ink and outline thing.

Lovin' both of these Lythan! I think the details you put into your LO's are amazing.

I really love your card and your layout, they are both so cool!
melx

What a brilliant LO. Well done.