Argh. There is nothing worse than having a movie night film that you doze to. Why? Because we have a no snooze rule so if any of the family catch me nodding off then I get woken up. If I could just have a real nap I might watch the rest, but instead I spent about 45 minutes with eyes open for 5 and shut for 5. Consequently I can't tell you what Superman returns is like but it can't be that good otherwise I wouldn't have fallen asleep to start with!

Saturday was mostly a day of rest (hurray!). We sometimes get periods of total madness so need to take rest days when we can. I made a card for a friend's niece's dedication. But didn't take a photo first. So I can say it is the best card ever and you will never know the truth...
Actually it was pretty good! I used the chalk and emboss technique from the Church scrap class and it looked very pretty.

IN the morning I went to the Open Day at Imagine That. I couldn't stay long but they had some great demos. I didn't mention my fear of paperartsy images but the new ones 0ut are more my thing. And Liandra who makes the stamps is hugely talented. She was using the Ranger Dauber acylic paints to such good effects. I bought a few more...

Later on Helen and Mike came over for a meal. Phil used his BBQ for the first time. The main course was ok but oh the puddings! He made lemon meringue and egg custard tart and I hand crafted a pavlova (it takes a lot of skill to take it out of the box you know). We watched Dr Who which was officially scary. How can things that you don't see move be so scary? Miss "I'm not scared" C Nevard spent the majority of the night in bed with her mum and dad. Which maybe why I slept today actually...

Sunday we had a lovely service at my little church. We meet in a room that is more like a large living room than a church. All three babies were there - all under 18 months. They were a delight (not always like that with so many of them in a small space!). And the fellowship and learning together worked really well. I love it when you can really feel the love of God moving through us. Ages from 7 months to 88. People from Nigeria and Romford and Trinidad and Wales. A real mix of the body of Christ.

Today I taught a class at Imagine That. Emma must despair over me because I always take far too long over the classes. I do enjoy teaching tough. Today was the exploding box class. In retrospect I made the class model too complex with lots of fiddly bits. I'll know if I am ever asked to make another prototype. And I did a bit of scrapping at home. I would love to enter all the challenges on Bex forum amongst other places but I just don't have the time. So I decided to set too today. I did one. For which you are supposed to do a card too so that is a massive .5 points for me!

We had to use this template 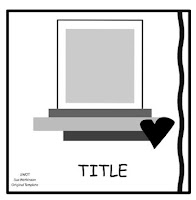 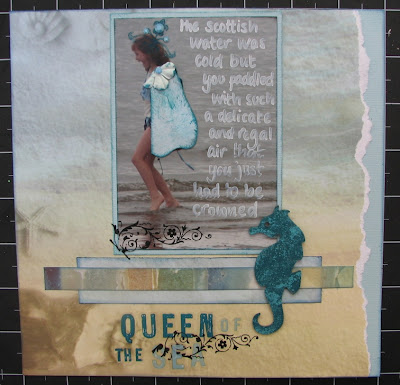 I have just received these papers in a kit from Funky Kits It is a nice kit because you get a few different sets of papers. These are Tropical Breeze by Paper Adventures. I cut a lot of the backing Bazzill off to use as a mount for the picture. The kit also included the seahorse which has been Daubered; the stamp which turned into a crown using paint; and the little blue gems. The letter stickers I have had forever from an old SA kit. The BG rub ons were a last minute addition and almost obliterated the "E" until I stuck another letter over the first one!
I have a little notebook to put scrap layouts in and scrapping this picture by adding a crown and cloak to Carys has been in there for about 9 months now! I'm glad I waited for this paper though 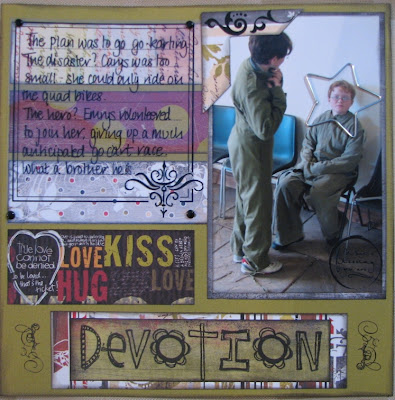 I took the elements of this to work on during the class at Imagine That. I find it is better to be doing than looming or reading - as long as I don't get too stuck in to my thing instead of keeping an eye out! This page uses BG Scarlets Letter (still can't beleive I love this paper as much as I do because en block it doesn't shine, but on the page - wow!) and some 7 Gypsies papers that come as four in a square - really cool. I chose the love bit becasue of the quote I have circled but also as an in joke as Emrys hates to kiss and hug. Add in my new letter stamps (again). These clear ones are so easy to place; more BG rubons; a Hambly journalling overlay and a clip which has been hacked and stuck on with glossy accents and there you have it.

these pages are 8x8 to go in the Scottish scrapbook which needs finishing before August. When we have another Scottish holiday! But there are only 4 pages left now - even with an extension in. Looking back over it is a joy - so why didn't I start scrapping before?

Fabulous stuff!! I love the Queen of the sea, such gorgeous colours.
I too am behind with many challenges. Simply some of the sketches don't fire me up with enthusiasm so i know I won't do well with them. However, I wanted alcohol inks & Keryn's butterflies really pushed me to have a go. Im suitably impressed!!

Your pages aree just so yummy, they are awesome! I tend to nod off during films too lol (especially toy story as I could probably recite it by now lol)
I know how you feel with all the fab challenges, just need someone to extend the length of a day :)
jo xx

This is such a great page Lythan. I love your style, it just works so well and I'm so jealous as I know that if I tried something like this it would look like a dog's breakfast.

What a fabby brother Carys has there