Doesn't time fly!
We have had a good few days at the mother in laws house. She lives near Ledbury - right out in the country. We managed to go out for a walk on the wettest day, go to the cinema for hours on the sunny day (Pirates of etc won't even bore you with how bored I was. Not even gazing at Orlando and Johnny lifted the tedium) and travelled home on the hottest day. Typical.
Here we are being wet 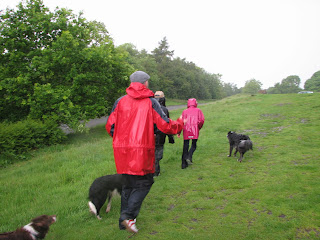 this is Mother in laws estate. 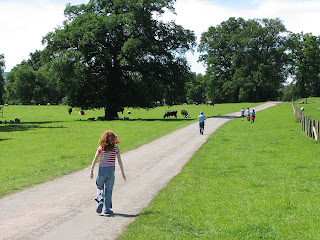 Ok she lives on the estate and doesn't own it. But she gets to walk around here and see lambs and calves 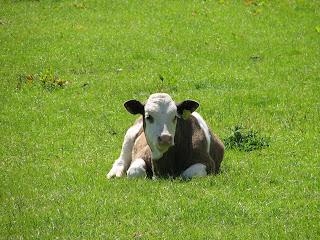 and ducklings. And scary cows... (and a bull but he wasn't as frightening as the cows who were guarding him and warning us off their man)


and here is the pup with his best friend Topper. 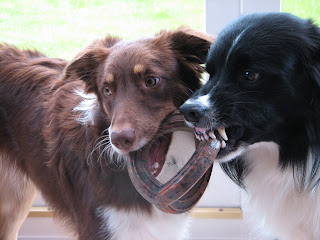 Topper is really patient and lets Spin jump on him and play tug. Spin thinks Carys is a pup too and attempts the same with her. Although he did also get over excited and wee all over her one day...


I was also inducted into the mysteries of the Wii. It is quite addictive. The children are so kind and try hard not to be patronising. But I really am pants at most of it.

Oooh and I better talk about DCM. It is so long since I made my card I nearly forgot!
I missed all the "fun" of the blog disappearing but the heroes down under rose to the occasion and sorted it out. Thanks guys!
This week the dare is all about seeing clearly.
Kel says- Okay, this week I would like you to use some acetate, vellum, plasma or anything else remotely 'see-through' on your card. That's it!
Now we have a brand new guest designer - the brilliant Kirsty Wiseman. And we did quite similar cards - though hers is a tad more on the funky side PLUS I think she sensibly used permanent inks. Unlike someone else who then had a mad panic becasue it wouldn't dry and threatened to smear. And anyway will not stay flat. But apart from that... 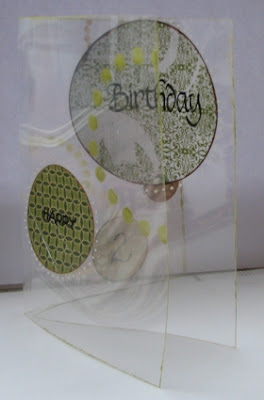 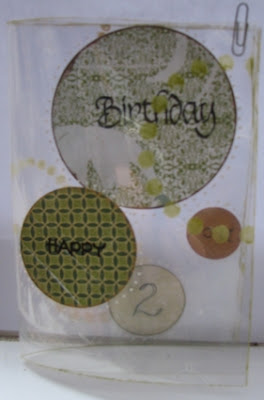 I cut an A4 sheet of acetate in half (and should have scored it better)
punched various size circles from BG Perhaps.
Used various stamps to add the wording (happy, 2 and you are purple onion from SA sets)
Added Banana Frog circles using chalk inks (doh. Do not repeat this step with chalk inks, they are still smearing 6 days later)
Ranger Dauber paint round the outside of the card.
white paint pen dots round the patterned paper circles.

Well it nearly worked... It is still better than what I can do with a Wii anyway!
Posted by Lythan at 11:17 pm

such a fabby go Lythan ! I havent had the courage yet to do an acetate card like this yet ! lol but did have another go on a card with some Hambly transparencies - will post later !

So you dont like Stella ruby so much ? It does seem to be rather versatile - lots of use everywhere - but Perhaps I dare say is not so widely used . I'm glad I only bought the 6x6 pad only ( & even so by mistake as I really wanted Phoebe )

Trust you're keeping well ! Havent had time to blog hop as much as before .

Lythan, I am in total awe of your cardmaking skills! I think this card is brilliant, I have seen a few of these, but I'm not brave enough to have a go :oS, and the acetate I have is very flimsy anyway so I don't think it would stand up!
Fabby card!!

I really love your see through card, it's really clever!!
Melx

Hullo - I *think* chalk inks are heat settable if you have used a heat resistant transparency/acetate you could try a gentle heat gun.

As to the lie flat but try scoring it with the back of your craft knife...I have done that before

Other than that love the idea - but I still don't quite get see through cards - where and how are you meant to write in them....

I love your card Lythan, super funky!
Great photo's of your MIL's estate, and what a cute little calf!

Lythan what stunning country side... soooo GREEEEEEEENNN!!!!.. (can you tell Australia is in drought) lovely photo's..
I really love your dare card, the way you used the stamps on the acetate is so clever...

Fab card! i love it though I would find it hard to make!