Happy birthday to me and Carys!

Yawn.
The trouble with having two birthdays on the same day on a weekday is that you have to get up extra early in order to open presents and cards. But I do love having the same birthday as my gorgeous girl.
Here she is modelling my new dressing gown. Doesn't she look adorable? 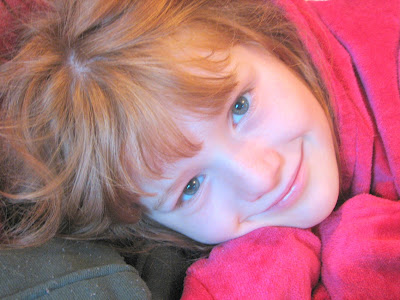 She is spending two days at the senior school (including tests - boo!) and was a tad miffed not to get a badge with Birthday girl on so in 5 minutes I whipped up this tiny thing 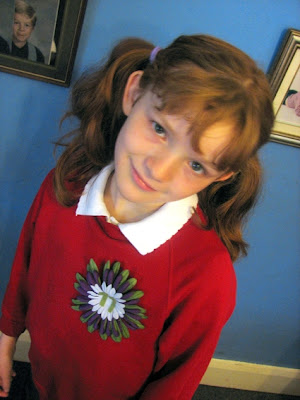 Thickers felt numbers to the rescue!
She is at Gaynes today and Hywel is at work experience at a pre school. the stories he tells about the little ones and the way he tells them have us in stitches. All the helpers are called auntie and one child has called him "Auntie Owl" (its how they say his name). It is so tempting to call him that from now on!

We had lots of lovely pressies. Her main present was a mobile phone and mine was a new screen for the 'puter which means everything looks so much clearer now!

I have been in Cambridge for the week on a Ministers refresher course. A tiny bit of this

(well watching anyway, I'm not paying for a punt) 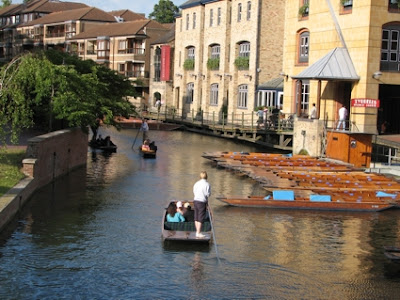 but mostly locked away inside here 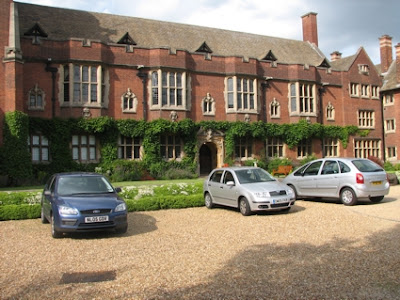 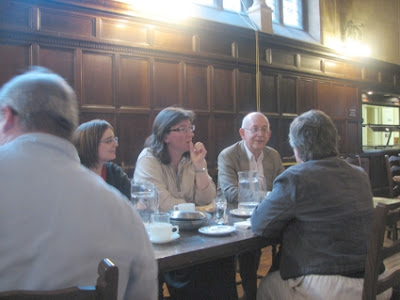 and maybe an afternoon spent sleeping...
(that is me with new trendy haircut on the left). It was very refreshing and only another 7 years til the next one...

I managed to fit in making a DCM card on Sunday morning this week - ready to give as a card for the child being dedicated on Sunday morning! We had a fabby time even if it poured with rain on the BBQ.
And here is the Dare for this week - Beady Eyed
Well this week is my dare (Saffa). Its quite a simple challenge really. All I ask is that you make use of beads on your cards. They can be seed beads, big chunky beads or little sequins, whatever takes your fancy. 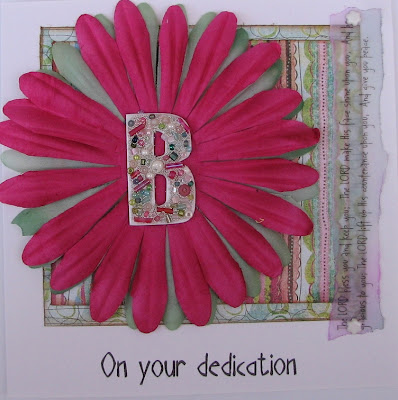 Square card with printed phrase. Some bits of BG Pheobe. The Aaronic blessing printed on tracing paper, chalked and adhered with brads. An auntie Sarah's and a Dunelm bloomer and then on the top the rather lovely bead encrusted B. 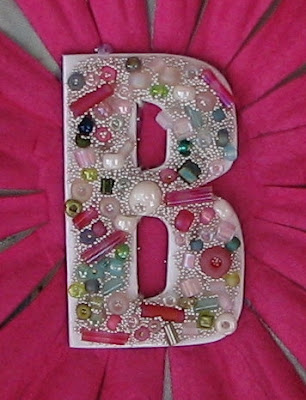 It was so easy to do yet looks quite scrummy I think. I covered an already white chipboard letter (Heidi Swapp) with glossy accents and then plonked on some matching beadsfrom the Bead Merchant. Finally I poured on some of those tiny accent beads I ahve had for years and never used. And that is it!

Thanks to all who sent cards to me - I was overwhelmed with them. I don't open them all straight away as I have more than Carys and it isn't fair. But in a mo I shall take a cup of tea and open some more!
Posted by Lythan at 9:58 am

Lythan, I absolutely love this beady monogram - it looks so beautiful and I bet it's even more gorgeous in the real. I've always found the beads run off all over the shop when I try this, but you've inspired me to have another go.

Hope both the Birthday Girls have absolutely wonderful days today - can't wait to see the oics of all your cards!

Happy birthday to you and your DD

Happy Birhtday - hope you both have a gret day. Hope my card made it through before the strike.

Happy Birthday! I hope you both have a fabby day!!

Love the beady bit on your card, it looks beautiful

Happy Birthday Lythan and Carys! Hope you both enjoy your day! Oh fab card by the way!

Happy Birthday Lythan and beautiful Carys.....I'm so sorry I missed sending a greeting on the actual day.
Love the beaded card.

OOO Happy Birthday Lythan ! & to Carys too ! how wonderful mum & daughter sharing the same B day ! lol your beads are awfully yummy ! deli!

hope you have fun today sistah ! lol - oops hope thats was not too irreverent to address a vicar ! - I still cant get over that you're a crafty one at that ! lol )

Happy belated birthday, hope it was lovely for you both!

I love the close-ups of the beaded card - very lush!

I hope you both had a great Birthday! Love that monogram Lythan
it's beautiful!

Ooo lots of lovely thing to look at!
Lovely new dressing gown, and lovely badge! lovely view of punting and lovely haircut, and what a lovely lovely B on that card, and thanks for shariong how you did it, I thought you might have taken ages sticking the bigger beads on!

You've been busy! Glad the retreat thingy was worthwhile and it looks as if Cambridge managed to give you a bit of decent weather!

That monogram card is fabulous - that's B for Beautiful, presumably? ;) Embedding the selection of beads in Glossy Accents was a masterstroke - looks absolutel gorgeous!

I love this card. That beaded "b" is fantastic.
Hope the birthday girls had wonderful fun.

What lovely photos and a beautiful card. I hope you both had a wonderful day!!!

That photo of Carys in your dressing gown is stunning. She is a real beauty.

You've been tagged (never done it before - sorry)

I love your beady card. Very cool and inspirational. Thanks for sharing it.