A little bit of show and tell
The class at Imagine That went fine - and we finished on time!!!!!!
There were only five not 6 so I could sit down and the whole group were lovely. I've taught some of them before so it is really nice to feel like a regular. The black and white cards that Emma prepared were fabby. Really simple, but effective. I then decided that one of them was very sixties which fitted the Daring Card midweek extra this week. So I made a version of it and then decided that it was too much like it and wouldn't upload my one. I was going to show it here but haven't taken a photo yet. Doh! Will add it tomorrow. But it is amazing how effective a bunch of circle punches can be.

Ready for the July Self Addressed kit I have been making cards with the last one. I am not sure if I will get a layout from it but it is cool for cards. The papers are so bright and funky
You don't have to do much to make them look really effective - especially with the base cards that come with the kit. 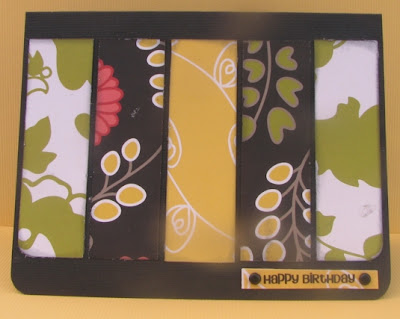 My friend Anita had her birthday yesterday so I made her a special card. It is called a joy fold card and I found the instructions on Beate's blog.
Of course I didn't notice the bit that said click here for instructions until after I had made my version so I will give it another go soon as it is fun! I've made some simpler ones (without the extra fold) turning the 8x8 paper into two cards so that the colours match perfectly. 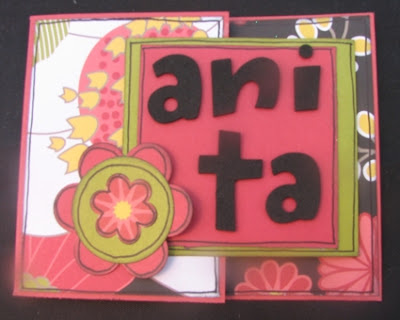 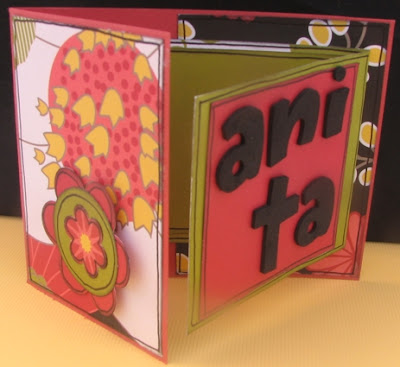 the American crafts thickers came with the kit too. I have four packs of these now and I love 'em.
I succumbed to the cuttlebug embossing folders as I couldn't hold out any longer.. Used one on a baby card for some friends who have just had a little baby girl. She was born with Downs and needed an immediate op but things went well and she has no other major problems thank God. 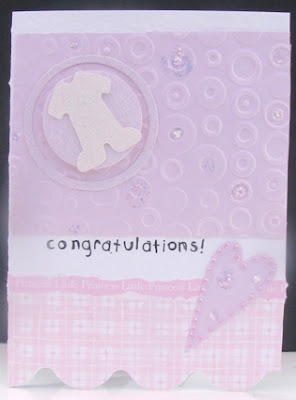 The card is even more shimmery and pink in real life as the babygro and circle are cut from glitter card. I know that Katie will bring some extra work, but I am sure she will also bring much joy to her family.

Because I did so much work over the weekend I awarded myself a little extra time off today. If I don't get it I start to crack up so needed some crafting therapy. And h******k as well. I thought I might get a couple of layouts done as I had time, clear ideas and hadn't scrapped for ever(3 weeks I think).
One lousy layout and it isn't even very good. Sob.
It will get photographed tomorrow and you can commiserate with me.

But the good news is - my layout of Dutch's dish with the photo in 3 pieces won a prize on Bex's forum. I'm so chuffed!
Posted by Lythan at 11:45 pm

Fab card for Anita (must have a look see how it's done) - please give her my love when you next speak. Well done on the prize for that very moving LO about Dutch

Lovely stuff as usual and I know what you mean about crafting time and not getting many LO done - June and July have been insane here too.

Beautiful cards! Love the cardstock and patterns and really like the black background on the first one...fabulous!

Love the card for Anita, the PP is gorgeous :)

I LOVVVVE Anitas card. The colours are fab and it suits the template really well.

What fabulous cards, I love the way you've used those lovely bright papers.