but just of tears! We actually had sunshine for half of the day. I'm so sorry if you were really hit by the foul weather.
Carys' year 6 production was really good. They did Sheherazade and it was much better than just a tear jerking series of songs as has been done in the past. Carys was really sweet. She looks so tiny compared to most of the other children now!

She played the tailors wife and had a beautiful costume. All were done by just 3 teachers! At the end all the children were given a card and a thesaurus

The head gave a little farewell speech and it was Phil not me wiping away the tears! Then we had tea and cakes cooked by the kids - a really nice touch.

Lunch with the parents was nice and then it was nearly time to go back and pick Carys up. They did something new this year which was for all the other Juniors to line up for the year 6 to walk through while they sang a "leaving song" 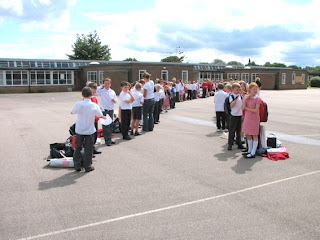 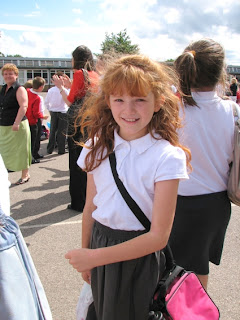 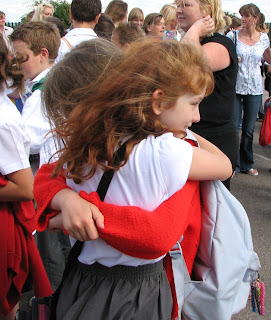 then the tears and hugs started. Carys wasn't crying but here is her little (I say little she is about 4 inches taller than Carys) year 3 friend sobbing on her shoulder. Leaving the school gates for the last time I nearly completely lost it. It was a real effort not to burst into heart wrenching sobs (how shaming would that have been!) . Carys was patting me on the back and telling me not to worry that she was happy to be moving on to the next phase of her life. I suppose that really it is about not having any babies in that sense any more and although I won't miss the school run at all , a big phase of my life is over.
(teary eyes again just thinking about it. What a wuss!) 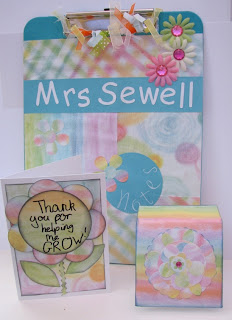 We decorated a clipboard and post it note pad and then shamelessly copied Adele's card phrase. All use tutti frutti papers from Funky Kits Kit 2. You can't see their shimmering loveliness in the photo but they really are beautiful. It also shows the difference inking makes as only the card pieces were inked, I prefer it that way - do you?
And lastly meet my little friend 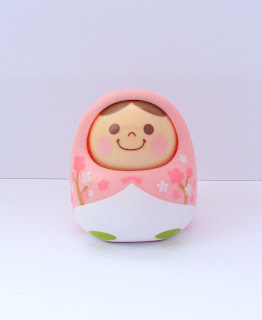 I was so taken with the little one I saw on Kirsty's blog that I "needed" one of my own. She nods and shakes her head and provides hours (ok minutes) of amusement! Isn't she sweet? Yup, my children may be growing out of childhood but I am not!
Posted by Lythan at 9:13 am

Awww Lythan, they grow soo quickly!!!
Not "my" phrase at all -in fact I stole it too!!!
Big hugs,

Great photos Lythan!! The one with her hugging her "little" friend is brilliant.

I was bawling my eyes out as we left junior school for the last time yesterday!!

Thanks for visiting my blog (Rest and Be Thankful) and making such a nice comment! I'm sorry Sakura is so pricey over there, those pens are such fun! Lythan, I've enjoyed touring your blog-- love your fun & funky style! I can pick up lot of tips from you. Also enjoyed your sweet comments about your family. Miss C is precious!

Great photo's. It's so sad when they leave yr 6.