My dad came to stay overnight. He is on a Church Committee and they have training in London this morning. It was all a bit mad what with children (Hywel's friends) Guides (taxi service) and dog plus trying to fit work in too. But I think he had a good time. We all enjoyed Lead Balloon with Jack Dee. I am not very good with comedy of errors - hated Some Mothers Do 'Ave 'Em for example. Last weeks Lead Balloon got so painful I had to leave the room. But if I can stick it then it is very, very blackly funny. How the girl playing Magda manages to keep such a sulky straight face I don't know. Thursdays 9:30 BBC2.

My mum arrived home from another URC training - this time in Windermere, after Dad had left to discover water coming down the kitchen wall. Her question to him "Did you know it was leaking?" still has me chuckling - although the situation doesn't. She also decided not to turn the stopcock off as she would be cold without the central heating... I have phoned this morning and got no reply so she might have gone shopping as Friday morning is shopping day.

This morning we have had lost pe kit (Carys as a nice change), forgotten cello and then a call from Phil's mother as there is tough family news from Canada and she has to travel there asap. Which has rather sent life all awry.

And, most importantly of all - it meant an all out rush to try and get a card done for today. Especially as it was my turn for the dare this week. It was a bit tough - and it may look as though the team have turned chicken - but it is simply that there is loads of ill health, pregnancy and business just now!

So here it is
Song without words
I would like you to create a card inspired by a song or a carol - it could be for Christmas or not! (you may have got all your Christmas cards done by now...) BUT there is a twist. the words of the song are NOT to be seen on the front of the card. You could leave it to us to guess! Have fun!

It looked so much better in my head 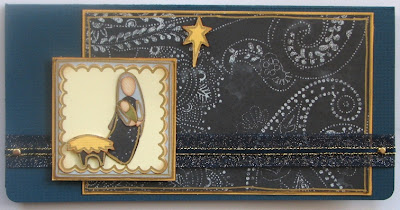 The card stock is 8x8 Bazzill folded in half.
The paper is nearly all from the Self Addressed September kits, one of my most favouritest ever. I added some gold card . The nativity figures are QK dies. I bought the nativity set a few years ago meaning to use it for Christmas cards. Until I started to cut it out. Now it is saved for special occasions as it is v. fiddly. 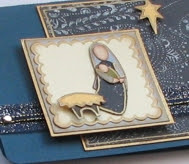 Then lots of outlining with gold pen and some pop dots for effect. Then just added a bit of ribbon. Well two actually. Held in place by two gold brads.
Why can't you buy just gold brads on their own anymore?
NOt as serious as some of the above problems but still annoying.

Anyway can you tell what the song is yet?
It was number 1!
Posted by Lythan at 10:10 am

Andrea got there before me - I was just about to say Mary's Boy Child - lovely card.

Beautiful card ,love the paper you used with it ,Dawnx

I think my first guess would be Mary's Boy Child too but was torn between that and Away in a Manger (come to thin of it I don't think that every got to No.1) Great card, all the same.

Hope all the family problems get sorted out soon and that the news from overseas is not as bad as first thought.

Yay I got it! Thanks for a great dare. Hope things improve for you and yours very soon {{hugs}}

At first I thought it was Away in a Manger til I saw your hint, now I think it is Mary's boy child.

You so made me laugh with your guess for mine, I don't remember Shirley Bassey singing Daisy Daisy! it was diamonds are forever! sorry I can't stop laughing! Thanks for such a fun dare!

I think your card is just simply beautiful Lythan

Gorgeous Lythan! I would have said 'Away in a manger'

I do love this card and agree about the SA Kit - have you tracked down these papers over here at all? They are just so beautiful - and the golden highlights you've added are perfect. Fabby card and fabby dare - a real challenge but such a fun one. Thank you

Lovely card - DOES look fiddly cutting though! Gosh what a busy day you had! Lol xx

Its a gorgeous card! :)
Vanessa.