She slept through the night.
Well until 6:45 which pleased me!
Then she stayed in our room for a while until PHil got up.
BTW thanks for all the dog lovin' messages! (And cat lovers too!) Lucky did not actually get into bed with us, just slept on the floor nearby.
It really is like having a baby around again. We talk about her sleep patterns a lot. I was out at a meeting all day today, phoned to find out how things were and got told all about her bowel movements.
Lucky is beginning to settle now. The fireworks spook her a bit so she ends up under my desk which is where Dutch used to go too. That is fine, only there is no room for my legs as well. I think she is starting to beleive that this is her new home with her new routine.

Here are the cards I did on Thursday. The first two use more of the wonderful Ribbon Oasis Christmas ribbon kit that I was sent for the Daring Cardmakers dare a few weeks ago. I have one left to use at all and then I shall use them all up as they are lovely. The last one will be more of a challenge as it is not really my style but I am determined so watch this space! 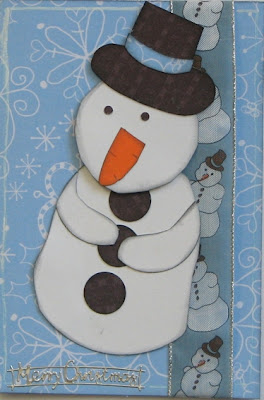 The background was a Pink Petticoat design printed on card and cut to A5 size and folded. The snowman was pieced together. He started out as two punched circles but that didn't look right. The brown of the hat and buttons is Pink Petticoat too. And somehow I had this bright orange piece in amongst my Christmas paper just right for his carroty nose. And I used a (shock horror) peeloff greeting. There is a white border to give added definition and of course, the lovely snowman ribbon. 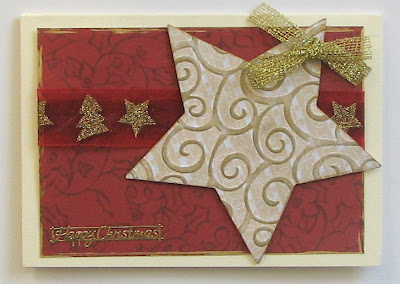 I used the next two ribbons before on my Christmas tree ribbon card. The horizontal card I just cut a star out of last time though! Backing paper is from the HOTP Christmas pad, edged with Krylon. The Pink Petticoat paper was die cut with a sizzix die and then embossed by a cuttlebug one. I went over the embossed part with a gold ink pad. Then I used a ribbon punch to cut slots and managed to tie a bow myself. (Sue H who once had to tie a bow FOR me during a class as I took so long to do it, should be impressed. I still have to do two loops...) 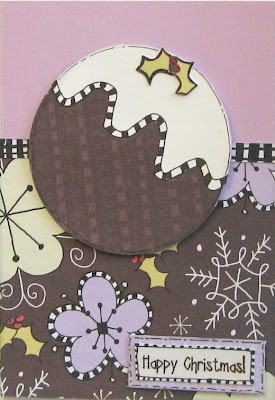 All Pink Petticoat apart from the shiny lilac card base. And some extra stripy and check doodling by me.

Thanks to the meeting all day I have still got some bits for tomorrows service to do. It is Remembrance Day so we have the two minutes silence. It becomes more meaningful for me as I get older. I hate and abhor war. It makes me so sad that we do this to each other. Especially when civilians are hurt - by accident or deliberately. It was quite sobering walking round Germany a few weeks ago and talking about the Blitz during fire work season here. It made me think about areas of both countries being obliterated during the war. And of course of the Genocide that took place against the Jews. And that Christians did notso all they could to stop it.
I think I have decided that, although I would always prefer to find a different way to act, I would never say never and me being a peace lover does not negate the sacrifice made on my behalf. And unless we remember, we will never learn from the past and keep making the same mistakes.

I hope you are able to find some time to stop and remember tomorrow
Posted by Lythan at 6:30 pm

Beautiful Bow Lythan!
No seriously, your cards are lovely….especially the Red Star one.

Please to here that Lucky is settling in a bit more now and you managed a good night’s sleep.