We have had non stop visitors for 2 weeks! Phil's brother and nephew, followed with a days break by Phil's mum followed with a day's break by my mum. we now have 3 weeks before my dad comes while he has meetings in London. Phil is happy as he likes to sleep in the buff and can't pad a round nekkid when family are here. Plus when mum came and fell down the stairs she was nekkid and he is rather fearful of meeting her in that condition.

(She had just come out of the shower and obviously wrapping a towel right round you or even getting dressed in someway in the bathroom is not sensible when you can just wander round a house you are not totally familiar with in the dark - because you don't want anyone to see you in your birthday suit - and forget to turn left into your bedroom and fall down stairs instead. fortunately we have a half landing otherwise it would have been more serious that one fractured toe. Which wasn't diagnosed for 2 weeks. Why bother the doctors over nothing? Somehow it still ended up feeling like it was all my fault though :) )

So now Phil can frolic round the house - just having to avoid the children who would be equally traumatised really and can write all about it on THEIR blogs. It is lovely to see them all as we live so far away. And the house is all clean and the ironing is all done (mostly summer clothes!) and the garden is fresh and tidy. Mums are wonderful.

Friday has sped round again. The Daring Cardmakers challenge was set by Tracie this week
and CUT!!!
All styles are welcome but there MUST be an element of handcutting somewhere.
It could be a greeting, a shape, letters printed on your pc and handcut,
anything goes as long as you did it by hand.
I knew exactly what I wanted to do. But I'm not entirely satisfied with the result. 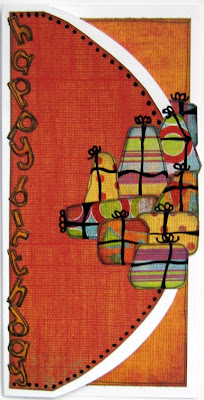 The paper is all Colour Me Silly by Basic Grey.
I traced round a plate to get the edge of the card. All of the little parcels are hand cut - though I did use a corner rounder too. Everything is inked and outlined as usual but the "ribbon" was done with a Sakura Glaze pen. 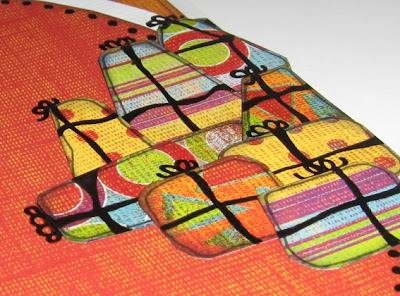 I used clear Glaze on the lettering too. I think that is the bit I am least happy with - had cut lettering is a bit childish - at least when I do it!
Here are a few photos from our boat trip in Bruges last week 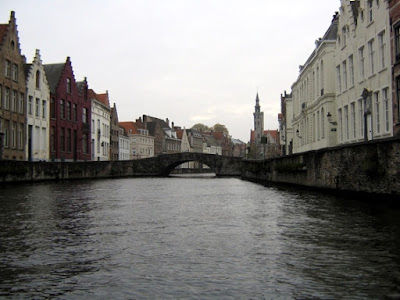 - we are getting old so we need to wear hats now. Phil bought a fairly smart winter jacket - it is a miracle as I don't think he has ever bought one before! 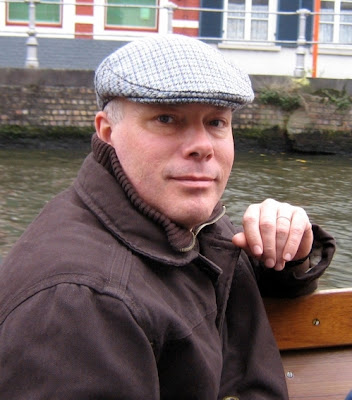 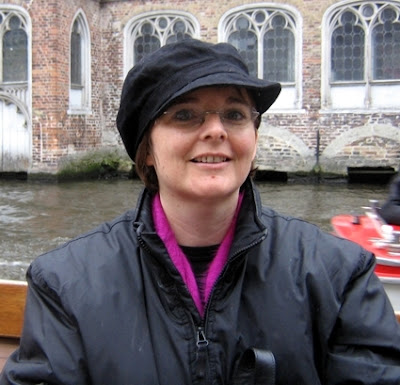 I bought a new coat too but here I am wearing my super warm mens bouncer jacket from Tesco. I had to buy it in a hurry when my coat got water logged earlier in the year. It looks terrible on me but feels so good.
Middle age here I come...
Posted by Lythan at 9:43 am

Great DCM cardf (as usual). Lovely photos of your trip away - love the hats! (and the Tesco jacket).

I love the card and the pictures! OH sleeps in the nudie as well ...always a trauma when you have visitors!lol I am too afraid we might need to leave the house in a hurry!lol

Your card is wonderful! Love the design! I also love the photo's from your boat trip, how fun!

Its a gorgeous card. Fab photos too.:)
Vanessa.

Love those hats!
Great story about these naked nighttime meanderings - your POOR MUM!

I love your card, it's so wonderfully bright and chetrful - I adore "colour me silly"

Lovely card and your handcut letters and presents are fabulous. It all looks great! I enjoyed your tales of life with guests, it makes me laugh as we have regular weekend guests!

Lovely card Lythan. It's so neat seeing other shaped cards other than the rectangles that I seem stuck with.

The way you described your Mum's accident made me smile. I'm sure it wasn't funny at the time tho.

I love the shapes and papers on the presents - a gorgeous collection.
Ros

I love your DCM card - so cool. I've nominated you for a You Make Me Smile Award on my blog. I'm sure you have had one already, but your blog is fab, and really does make me smile. Thanks.

What an amazing card. I think you're lettering is superb! Great colors.
Misty

I think your card is fabby, all the parcels look brilliant and your lettering is so not childish :)

Love the card.
Love the papers.

Hope things start to slow down a bit for you now.

I love the cutaway front of your card and the huge pile of pressies, fab! Your description of nekkid wandering chez Lythan really made me giggle.

Nothing like a hat to keep you warm, great to see some of your photos.

Oh and while I remember, of course its ok for you to use mt Congrats card as inspiration, I'm sure you'll do it much better!