My first child was not a "good" baby. He did not beleive in routines. or much sleep. So I was delighted when number 2 came along and on his third day became a do it by the book baby waking up only every 3 or 4 hours for a feed. I looked forward to being able to plan out my days quite easily.
Unfortunately the routine only lasted 24 hours.
(7 months later the controlled crying thing did the trick though)

I was reminded of this in the middle of the night. Obviously Lucky sleeping through on her first night was just, well, lucky. The hound of the baskervilles cried from 1 (when Phil finally went to bed still on a high from Bolton tying with some German team. They are v. good apparently) until 2:30. Apart from the foray round the block that Phil hoped would help. It didn't. the only thing that did was... sleeping in our room. Hmmmm. Mind you she refused to walk down the stairs again (not sure how she got up them. I was trying to sleep). I suppose it is nice that she is attaching herself to us. Just don't want to have her sleeping in my room with me.
Yawn.

Emrys went back to school yesterday but he and Hywel are off today. Both feeling very nauseous. Not helped by the fact that their bedroom is over the study where the controlled yapping and whining thing was going on. (And didn't do the trick)

On to brighter matters
It is dare day.
Jo set a cracker of a dare this week!
Getting Corrugated...
I seem to have developed a little bit of a fixation with old cardboard boxes....! My dare this week is to use some corrugated card on your card - it could be corrugated craft card or an old box etc. taken to pieces :) You could make the card blank from it or die cut shapes etc...
I really enjoyed this one. Someone I met a few years ago, with the marvellous name of Booj Beak(married to a mate from Uni who I am pants at keeping up with) makes wonderful baskets from cardboard boxes. She wets the outer layers and peels them off. Then apparently you can make little rosebuds and flowers with them. That was my plan. Only it didn't work. Booj then goes on to paint the corrugated bit, cut it into long strips and weave it into the most pliable but strong baskets. I didn't attempt that bit either but instead ended up with this. 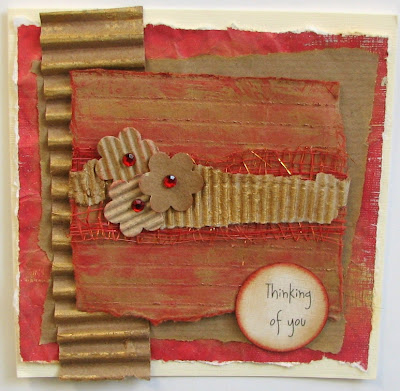 I used a cream square card blank (just to be different). The red paper is Daisy D's - torn, scrunched up then painted with Gold Dabber paint. the next layer is brown wrapping paper torn and edged with gold. The long strip is the middle of a thick cardboard box, roughly painted with gold. Next comes the outer layer of that cardboard box painted with red and gold Dabber.
Horizontally we have some gold and red raffia type ribbon stuff that I found (literally) on the floor of the conservatory/craft space, then the inside of a thin cardboard box roughly painted with gold, topped with three punched out flowers, two inner and one outer cardboard box with 3 little red gems on the top. the greeting was printed on white card which was darkened using brown and red distress inks.

I think describing it took longer than making it! 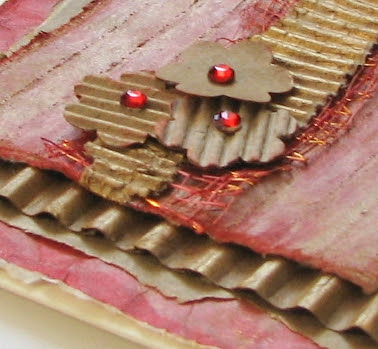 I managed to make some other cards at my small church craft club yesterday but I will share those tomorrow as there is a service to be done and some boys to nurse and a dog to ask please stop whining (I think she has attached herself to Phil who is now out!)

Ahh, falling asleep with a large dog led in between you. One of the best forms of contraception!!

Fabby Card Lythan, I hope to get one up later (poorly child permitting)

As for the whining dog thing, I remember it well. Sometimes even now Titch (yes I know silly name for a german shepard!) will start it when Wayne goes to work until I shout down the stairs " I am still here you silly dog!"

We found when titch was a puppy and crying at night, give him a pillow or teddy or something he can love and he wont feel so lonely.

Wonderful Card. The used paper is so fabulous. Gorgeous.

oh oh! the slippery slope of bedroomdom. Once you've given in once that's it game over :) that dog'll be on the bed between the two of you in no time.

(take it from one that knows LOL )

fab card. We have a rescue dog who kept getting on the bed when we first had her but I got fed up of it and after a few nights of perseverance she now sleeps on the floor but she is such a wimp I doubt we could get her to sleep downstairs

Great card ,love it ,
my little girl alexx is just the same ,she always ened up in our bed or came wondering in the early hours ,
i know it sounds horrid lol,but in the end i told her she could only sleep in our room if she slept on a quilt on the floor at the side of the bed with her quilt it only took a week and she got feed up of being on the floor lol,
i know bad mother but i need beauty sleep lol,
Dawnxx

You could try a radio on low might help.

Lovely card by the way!

I love all the layers and the "distressed" look you've got with this card.

I guess distressed just about sums up you and the Lucky situation atm!

This card is absolutely brilliant. Sympathise with the dog thing - I grew up in a house that always had two dogs and 2 cats and ONE of them was always whining! Also had one of "those" babies myself until 8 months!! Lol xx

I hope Lucky has given you a bit of peace and quiet. Great card for the dare.

Great card Lythan and had a really good laugh at your blogging!

Aww Lythan, I’m sorry to hear that Lucky (and the rest of the family) are having sleeping problems. It must all be very strange for her but I’m sure she’ll settle down soon.

Love the card you’ve made this week but I would never have guessed that it was ‘your’ card. It’s so different from you usual style.

Your card is gorgeous Lythan, I love the richness of all the layers, scrummy! How's Lucky been these last few nights?

This is fabby!! lovely layers!

Think how warm a nice furry is in the winter though Lythan! I sleep with one cat on my head, one on my legs and one to my side!!LOL!!

Hope you manage to get some sleep soon. My dog used to somehow manage to take up about 3/4 of the bed and he was only a little cocker spaniel!!

Card's great by the way.

Gorgeous card. Love the colours.
Im just not a huge fan of corrugated card & I think it shows it was kinda bunged together!!