She is so cute!
Big... but cute.
She has met the chickens (wearing lead and muzzle) and did not chase after them or pull at the lead. 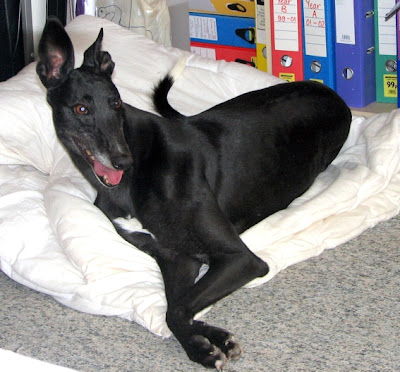 You can see her lovely tippy tail here! 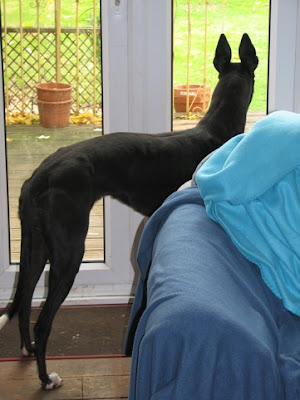 And how tall she is (though she is small for a greyhound). She actually did win some races in her time - she is 4 now. There were about 50 dogs to choose from - soooooooo hard. I can't wait for the kids to meet her.

Emrys is actually home poorly. He hasn't been right for 5 days now - I think it must be some kind of virus. He is the sort that likes to be left alone when unwell so to be honest, I keep forgetting he is there.
Yes, I am that good a mum...

I also promised a look at the layout I did on Monday. Oooh hark at me, its as if I have a readership gagging on my every word. I just like to show what I have done, even if I am not that keen on it myself.
I have to admit though, in the end this came off. For a while it nearly went on the scrap heap (as it were!) 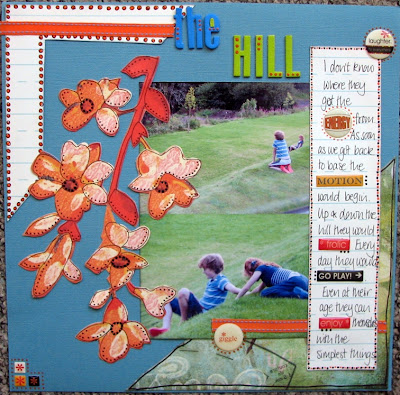 Bazzil cardstock and 2 BG Stella Ruby papers. One hand cut to within an inch of its life. And the blue stripe paper is, umm I can't remember. And if I move now to look at the actually paper, Lucky will wake up..
The chipboard letters are painted with Ranger dabbers. I just love the colours!

and I added orange glaze pen dots. The layout needed that bit of orange to make it zing. SO I added quite a bit in the end... 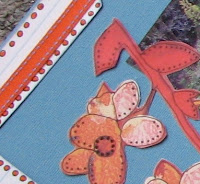 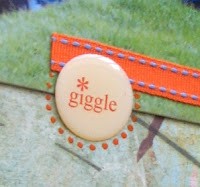 The stickers are all by Christina Cole

I decided to leave the journalling a bit messy and mistake filled. It is not because I am too lazy to start again. How very dare you!

Once I put the layout in the album I realised that the two Wemyss Bay holiday layouts so far both feature orange quite strongly so I am wondering whether to make it a theme for the whole holiday album.
Or just move them around when I have added more....
Posted by Lythan at 2:09 pm

Oh now, Lucky is just gorgeous! I do hope it all works out well and she is able to become a fully fledged family member :o)

Love the layout too, like the journalling style in particular.

Isn't lucky cute?! Love the LO - like the use of the orange. Hope Emrys is feeling better soon.

She is gorgeous Lythan! I used to have 2 greyhounds. They would spend all day on the couch if they could... unless they were chasing something small and furry!

She's living up to her name by being adopted by you lot - she's going to have a fabby retirement.

And the LO is wonderful, sunch a fun and bright design perfect for the photo

Yet another wonderful LO Lythan, you put me to shame.

lovely LO and Lucky is adoreable

welcome to your debut Lucky!
Love the colours in your layout Lythan!

Love the fabby layout too!!