Now often I struggle with Salt layouts. In a good way. Part of the joy of Salt is working out how to convey what I want to say with photos, paper, ink and glue! But this one eventually came together a lot more quickly. I say eventually because my first idea was vetoed.
Hazel chose the theme of Contentment
I was drawn to Philippians 4, particularly verses 11, 12 and 13, where Paul says:
'I am not saying this because I am in need, for I have learned to be content whatever the circumstances. I know what it is to be in need, and I know what it is to have plenty. I have learned the secret of being content in any and every situation, whether well fed or hungry, whether living in plenty or in want. I can do everything through him who gives me strength.'

My first idea was to have a picture of me jumping in the air, launched from a trampoline, possibly with Carys as well. This was inpsired by the book I have just read - Velvet Elvis by Rob Bell. He is so wonderful to read - or watch on the Nooma series of films. And he talks about faith like jumping up and down on a trampoline. But Phil did not look content at the idea of dragging the trampoline out from under the tree and putting the washing line away. So I changed my mind. In retrospect I think the idea of me jumping is much more attractive than the physical reality would have been...

SO I decided to do a slideshow of photos until one spoke to me. And the one that did was rather unexpected. 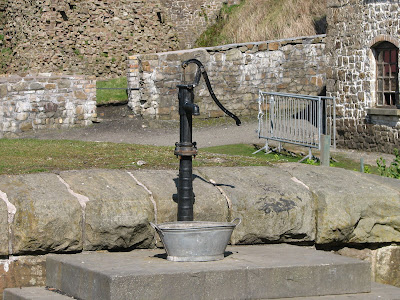 We went to the Big Pit whilst in Swansea. On the day of a Museum workers strike. (Just typical that) But the Iron works round the corner was open and free so we went there instead. It had been used for a BBC Wales programme where families lived in some of the houses and worked as ironworkers last year so it was fascinating. They used this water pump to get their water. AS people always used to do. And many in the world still dream of getting water this easily. So it got me thinking... 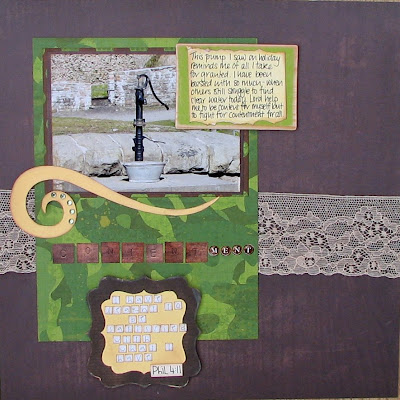 The backing paper and the two cut outs are from Cosmo Cricket Wanted. A must have that hasn't been much used. The other paper (double sided) is from Scenic Route Grafton. the little word stickers are Adornit. the circle ones from my QVC kit of years ago. the typewriter ones I can't remember but suspect came in a Self Addressed kit, as did the green journalling block. (Hiding the fence that rather spoils the photo!)
The gorgeous ribbon came from my window sill. It had been there for ages waiting to be used and was just right. (And it isn't squiffy in real life!) I couldn't remember how it got there until it came to me that it wrapped my Secret Santa present from the wonderful Gillian Hamilton. See it pays to be untidy!
Here is a close up of my journalling 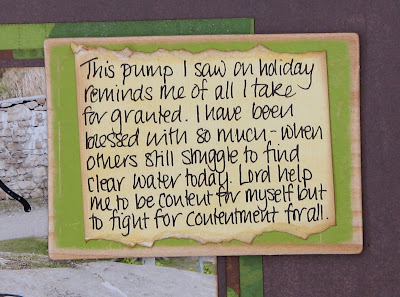 I almost didn't manage it this time but I am always surprised that I can take a scrap of paper and write on it and finish what I have to say in just the space I have been given. Not the most useful gift ever, but a handy one for a crafter!

Have a look at the amazing variety of interpretations on the Salt blog. There is so much inspiration there.
I have to finish off my essay today ready to take to Cambridge on Tuesday and I am procrastinating madly. It isn't helped by the fact that the kids are home. Its not the interruptions - its the noise of the computer games.
And getting told off for being messy...
Posted by Lythan at 10:44 am

I love your poignant take on the challenge, Lythan. Your handwriting never ceases to amaze me - and, as you say, the way you fit it in exactly where it needs to be (wish I had the ability to do either of those!) Hope you get the essay done and dusted.

Thanks for visiting my blog, I've never heard of a salt layout, but what you've done looks very nice!
Clairexx

Wow this is soo different from what I would call'your stlye' different but still as great! Love all the elements, and yet another thought provoking message. Thank you!

Great message that you have journalled Lythan! As the others have said, it definately is thought provoking!

I love the story behind your page. I think the water pump does voice contentment and gratefulness.
I've read Velvet Elvis too and really appreciated the outlook.
amanda

It's a lovely thoughtful page... I love the Nooma videos too! We've got Velvet Elvis on the shelf (somewhere - being married to a minister means there are lots of books!) which is on my 'to read' list. My 'to read' list stretches on and on and on...I love reading but unfortunately am always trying to read several books at once!

How inspiring! Love your take on the challenge, Great job in deed!