Copper load of this

Took me ages to come up with the blog heading!
And it is all to do with it being Little Extra day on Daring Cardmakers. I decided that I had to join in as it would be a great excuse to buy the copper Dabber to continue building up a rather gorgeous set. I don't always use these paints as dabbers as some don't come out easily. But I love the colour and consistency soooo much!

We are starting a little series of cards based on wedding anniversaries. This week it is 7 (why start at one, that is boring) and so the theme is
'Wool or Copper'
My next anniversary is 20th. That sounded like a good excuse for a present so I looked up the gift for that. China. Humph. I don't want china. Incidentally we are going for some posh nosh to celebrate. Which is also an excuse for buying. In this case a nice dress. There was one I have had my eye on in Monsoon - a real treat for me. Price was good, colour lovely, style would suit. I just didn't have time to try it on. It was in the shop for six weeks. Until the week when I did have time. And they have a whole new stock range in Monsoon. Now it was a summer dress - small straps and sleeveless. How can it be out of season already? Gah. There are lots more nice dresses around but of course none as nice as "my" dress. Sulk. Now I am going to have to go clothes shopping in a serious way. Which I don't like. Although NO new dress would be worse...

Anyway my witter is over for today. Here is my card! 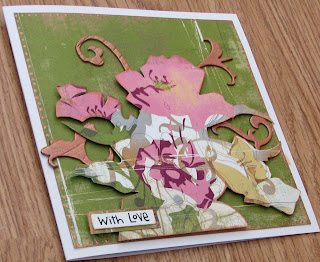 A white square card, covered in 2 Basic Grey Perhaps papers. The flower paper was ct out and raised on foam pads. I also covered a grungeboard scroll with copper dabber and cut it up to add something extra. Finally I dabbed dots of copper around the edge of the card and added a hand written sentiment.

I am trying hard to keep to my "make a layout, make a card" rule. So here are some more cards made using Lynden by Scenic Route. All very sweet and simple, using some very basic but highly usuable templates by Nichole Heady 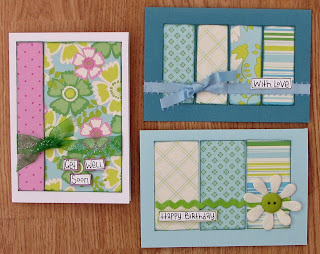 I had a real treat yesterday - it was a Christmas present actually - a facial! Someone at Phil's church is a beautician who comes to the house. I have never had a facial before - it was amazing. Phil reckons that some of my lines look less prominent. Mind you I think they were back in the afternoon when the class I led at Imagine That turned out to be less straightforward than I had thought! The lovely cards were made using die cuts of chocolate and cake and were a tad more fiddly than we might have believed. I think the ladies were pleased in the end though. On Saturday Paula Pascual is doing some Paperartsy demos at the shop so I might just have to pop in! Its worth a look if you are anywhere near Upminster
Posted by Lythan at 5:45 pm

I love your copper card, 'spesh the painted grungeboard - I bought some at Ally Pally but haven't been brave enough to try it out yet! You may just have inspired me to have a try.....:0)

Great copper card. What a shame about the dress - hope you find another that you like just as much (it's really stupid the way things go out of season before we've even got there!)