The first one came when Carys lost her baby. They are reading "Flour Babies" by Anne Fine at school and all had to choose some sort of baby to adopt for 3 weeks. Carys chose a potato called Wilibur. There was no more devoted mum. She would wash him, talk to him, read the bible to him... she took him to school in a little bag inside her big bag which she left open "so that he could breathe" and on getting to school discovered he had fallen out along the way never to be found. She was distraught. She called herself "the worst mother in the world". The weekend gave some perspective and now she has a new child called Javier. Who WON'T need as much air on the way to school.

The second came when my computer died. The hard drive is fine - but there is something crook. There was a time when I thought the edits I had done to my essay were lost as I didn't back up as carefully at home. And then the laptop stopped working so for one bad moment I thought that I might have to start the whole thing again. But Phil has grafted my hard drive to another computer - which has a dodgy keyboard. And I handed my essay in yesterday. Phew! All done for the year. I keep worrying I have failed. But that is how I am.

The third has been trying to find a dress. I won't go into the long and tedious trips out. I now have a very nice if rather boring little black dress. It is the Monsoon one I loved only in black. I knew it would suit me. Still want the green one!

Other shopping news - had a fab few hours at the Imagine That open day on Saturday. I watched Paula Pascual demo with grungeboard and art from the heart powders and paper artsy stamps. She was so inspiring. And I did a make and take card too which caused me to buy some more new stamps from Paper Artsy. I love their new ones - not so scary!

Onto craft stuff. I am limited with what I can do on this puter. But I have a new one coming tomorrow. We are really computer reliant at Nevard Towers. So I am not going to attempt to show you the Template that Kathy did for the Little Extra on Daring Cardmakers this week - just clik on the link to see it.
Here is my take on it 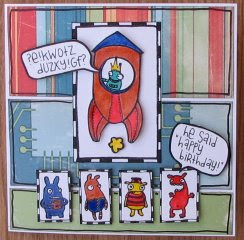 On Monday I did a Scrapitude pre crop. You had to make a layout, then a card and tag from the scraps. Now I am sorry about the size of the layout. It may get bigger if you clik on it. 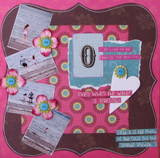 It is called "O I do like to be beside the seaside" and the rest of the blurb says "even when it is freezing" "and you are at the mouth of the Clyde not the beach". It was cold watching Carys and Phil! The paper is Pink Martini. I traced the scallop shape (I love it so a the moment!) The heart is bazzill and the flash card is from a self addressed kit. I have an Around the Block version of a Dymo which I used.
And here are the other items 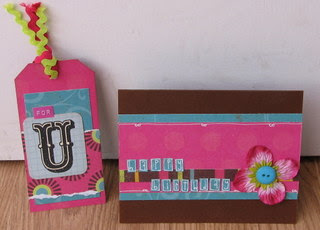 I am slowly filling up my holiday album. Just as well as summer approaches!

That is enough of sticky letters for now. Roll on the new omputer (but thank goodness the hard drive is ok and I really, really will back everything up now honest)
Posted by Lythan at 4:38 pm

Beautiful works as always Lythan and your story of Carys did make me smile. Bless her, that's so sweet. lis xx

ooooh what lovely things you been making. Shame about arys's "baby" and your poor omputer with it's stiky letter urly " "

Hope your new one is better behaved

Oh I feel for you over the computer problems, I can't survive without this one, if I'm away from it for a few hours I have withdrawal symptoms!! Thanks for sharing the 'baby' story it was so sweet.
Anice xx

Sorry about your disasters, hope they sort themselves out, love the Alien card!

This is so cute! I'd just finished reading Anne Fine's book.

Poor Carys! I hope she doesn't take it too badly because even the book has a happy ending. I love the teacher's idea of giving them the freedom to choose their "baby".

In case you haven't read it, here's the review